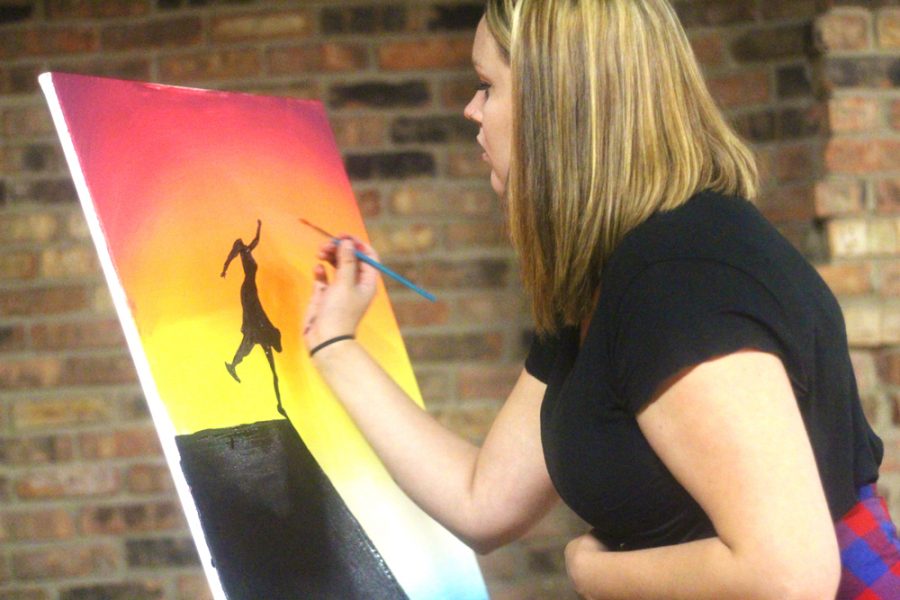 Morgan Tudor, a senior psychology major works on painting a picture during A Night of Empowerment in the 7th Street Underground. "It represents taking a leap of faith when we feel hopeless" Tudor says.

At Voices and Visions of Empowerment, LaPorshia Graves told the story of a woman who has given everything to everyone for her whole life, without thinking of herself.

“What does she have left? She has herself, so she built herself up,” Graves, a graduate student studying political science, said of the subject of her poem.

Performers played songs on instruments such as the ukulele and piano while singing, or performed poems like Graves did.

The woman in Graves’ poem tells people she is fine when she is really not, but she still hopes someone someday will give something back to her.

“Imagine a woman, giving it all, now empty, her body is a vessel, what is she to do?” Graves read. “She fills herself up, slowly.”

Graves, said in most of her poems, she takes on the persona of a different person.

Although the woman in this particular poem is in pain and has been going on through hardship for a long time, she still keeps going.

Sometimes, powerful words will come to Graves her in her sleep and she will wake up to write them down. “It’s kind of like a spiritual connection for me,” Graves said. “It’s not my story, so I feel like I have to tell the story of someone else correctly through my poetry. I put myself in their place.”

Graves said the empowerment SACIS gives others is what inspired this poem.

Erin Walters, executive director of SACIS, said the idea behind the show is that empowerment is part of the journey, especially for survivors of sexual assault.

“We wanted to highlight the positive empowering ways people can demonstrate how they feel, and express how they are empowered,” Walters said. “It’s just so inspiring to see people kind of release their sense of empowerment through music or dance or poetry or painting, or any medium, any art medium.”

A lot of times, it helps people process how they feel if they sort it out through the arts, Walters said.

Frances Hebron, a senior social work major at Lake Land College, performed a song by Amanda Palmer that meant a lot to her called “Bigger on the Inside,” playing the ukulele and singing.

“It’s the most important song I know,” she told the audience.

Amidst the performers, Morgan Tudor, a senior psychology major, painted a picture throughout the night.

Tudor said she was painting a picture of a girl reaching for a balloon while going toward the edge of a hill, using orange and red hues.

The girl was meant to be taking a “leap of faith,” she said.

The show was also done last year following a “Take Back the Night” march in Spring, raising awareness for the fact that women feel unsafe walking alone at night and encouraging them to reclaim the streets and towns they walk around.

Donna Turner Hudson, adult counselor for SACIS, said the organization wanted to carry the spirit forward into the fall.

Hudson said many of the people who go to SACIS know what it is like to feel disempowered by sexual violence.

She said part of the growth process to feeling empowered again is reclaiming one’s life and identity and art can help with this process.

Walters said the show will be an annual event, at the very least as it is well received.

“It certainly is good for the soul,” she said.