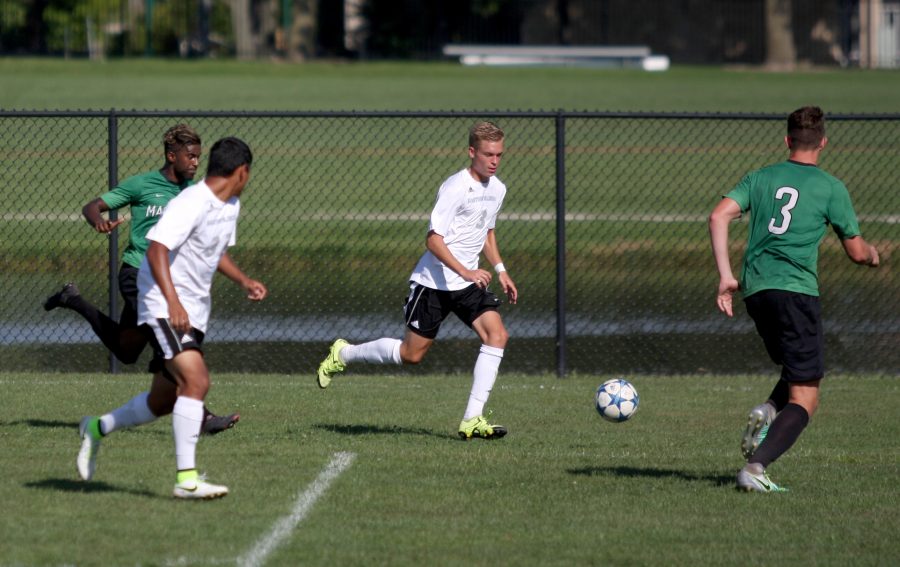 Sophomore defender Jacob Lysik moves the ball upfield during the Panthers' game against Marshall University on Sept. 4, 2016. The Panthers lost, 1-0.

The men’s soccer team continues its three-game road trip still in search of its first win away from Lakeside Field this season.

The Panthers will head to Wright State, a member of the Horizon League, who is 4-3 on the season including a 2-0 record at home.

Eastern is coming off of a tough road loss to Western Michigan as another late goal turned into a loss for the Panthers this season.

“They are a dangerous team going forward,” he said. “They have some special players that can be individualistic. This means they can hurt us at times but also be susceptible to counters and good team play.”

Eastern has been able to generate some offense this year, which was a problem for the Panthers last season.

After being shut out in four of the first six games last season, Eastern has scored at least one goal in all but one game this season when the Panthers were shut out 1-0 against Marshall.

Lara talked about what the offense needs to do in this game for them to be successful.

“On the attacking side, we need to work toward becoming a more fluid and relentless team getting forward with multiple ways to get into the attack,” he said. “That is going through them with good possession or in behind them and supplying numbers to the ball.”

A player to watch from Wright State is Peguy Ngatcha, who has six goals and one assist this season.

The next leading goal scorers on the team have two goals apiece, and Ngatcha is responsible for half their goals so far this season.

The defense, which struggled against Western Michigan, is something Lara pointed out as a key to winning the game.

They will once again be without junior Zach Medawattage, who did not play on Sunday but is progressing for Saturday’s game.

“We have to be bought into team defending and organized with our thoughts and recovery runs,” Lara said. “We need to be committed defensively with our set pieces, as well, and aware of dangerous players that come in our box.”

Wright State is coming off of a 4-0 win against the University of Illinois-Chicago on Saturday but suffered losses to Bowling Green and Green Bay before that.

Eastern also played Green Bay earlier this season and beat them 1-0; Wright State was on the other end of the same score in that matchup.

The game will begin at 6 p.m. on Wednesday night.