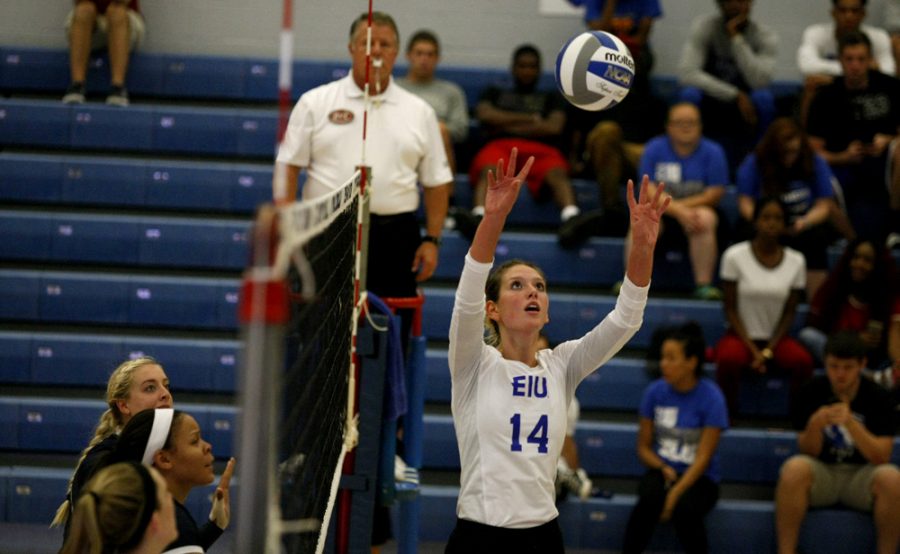 Red-shirt freshman Gina Furlin sets up a teammate during the Panthers' match against Butler on Aug. 30, 2016, in Lantz Arena. The Panthers lost 2-3.

It was all or nothing for the Eastern volleyball team the past few days as it wrapped up the final weekend of non-conference play for the season.

The tournament took place in Starkville, Miss., and the Panthers faced off against Troy, Florida International and a Power 5 conference opponent Mississippi State.

Eastern had most of its success in the tournament against Troy and FIU but still gained plenty of experience facing off against a top dog such as Mississippi State.

The highlight of the tournament came Saturday morning as the Panthers pulled away with a sweeping victory over Troy.

Not only was it Eastern’s first win of the tournament, but it was also the first win against Troy in program history, as the two teams have never faced off before.

Although it was a sweeping win, all three sets in the match came down to the wire.

The Panthers pulled away in the first set by a margin of just three, and they won the final two sets by two points in each one.

The first match of the tournament for Eastern was against Florida International, and Eastern kept it close but fell just short.

The Panthers fell 25-20 in the first set then followed with two more 25-21 losses to wrap up the match.

While the win against Troy highlighted Eastern’s tournament, it was the test of facing Mississippi State that was most interesting.

The Bulldogs are the only Power 5 team the Panthers will see this season, and the match followed a similar trend as the rest of the season.

Eastern’s youth was apparent throughout as the team was just outmatched, dropping the first set 25-17 and following with 25-19 losses in the final two sets.

Although the losses stood out for the Panthers, the growth did as well.

Eastern continues to ride a team with no seniors, but others have only elevated their play because of it.

After being sidelined due to injury a year ago, red-shirt freshman Gina Furlin has bounced back in a special way.

Furlin continues to improve as the season goes along while shaking off the rust, and her best performance yet may have been this past weekend.

Furlin was named to the Maroon Classic All-Tournament Team after posting 30 assists and 20 digs over the weekend.

Taylor Smith continues her special sophomore campaign, posting yet another triple-double to her NCAA Division I lead.

Freshman Katie Sommer is also emerging in her first year with the team, and she was a part of an important run against the Bulldogs

Sommer posted six kills and five blocks in the tournament and took part in tying a set at 16 against Mississippi State.

The Bulldogs went on a five-point run to take the set, but Sommer showed her growth throughout.

Eastern is coming out of the non-conference slate with a 3-11 record on the season, and the Panthers will begin conference play Wednesday against Southern Illinois Edwardsville.