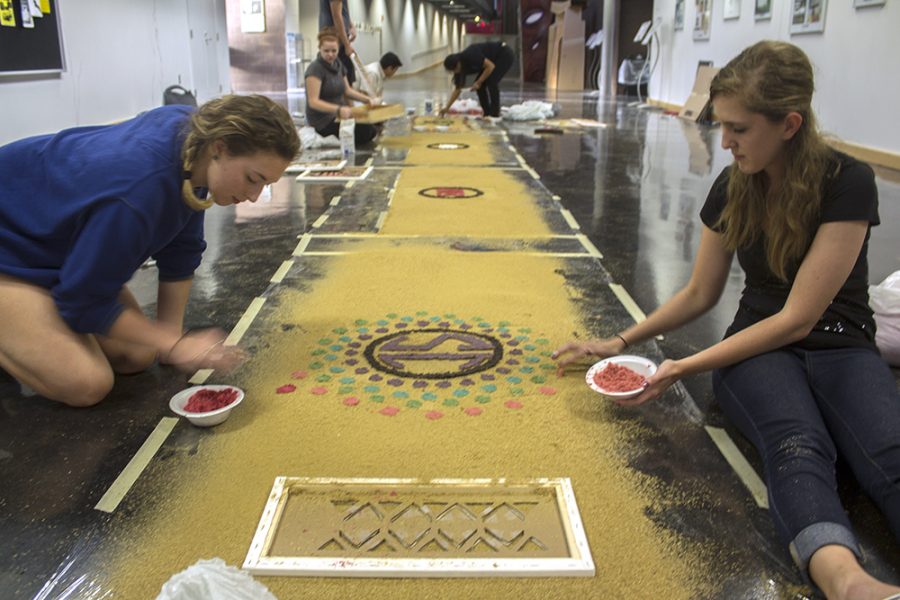 Kristi Zoubka, a sophomore athletic training major, and Rachel Washburn, a sophomore elementary education major work together on an alfombra for Eastern’s Spanish club. “The freehanding is going a lot better than I thought it would,” Zoubka said. “We’re kind of rainbow hombreing it.”

After an entire summer of planning and prepping, Eastern’s Spanish Club organized the making of an alfombra, or carpet, for their Latino Heritage Month project Wednesday in the hallway of the art wing in the Doudna Fine Arts Center.

Club president Kasey Adams came up with the idea for the project after her second trip to Guatemala for a spring break study abroad program.

While Adams was in Guatemala, she roomed with fellow club member, Hollie Austin, during the family homestay.

“I loved (the experience),” Austin said. “When we got there, the family we were staying with had one set up for us to help them with. We stayed up ‘til 4 in the morning. It was a lot of fun, though.”

An alfombra is a carpet often made in Central America for “Semana Santa,” or “Holy Week.”  It is made from things like sawdust, flower petals, grass blades and other natural materials.

When made with sawdust, the dust is collected and dyed, then left to dry for a few days. After the sawdust is dry enough, it is then spread in layers over a canvas or street with a screened sifter and placed into patterns.

After weeks and months of preparation, entire neighborhoods and streets work together to create large alfombra designs.

The process can take hours and even days to finish. The carpets are then put on display on streets for a parade to walk through during the celebration of Holy Week, which is in the spring.

The Spanish Club’s display is made of dyed sawdust donated from Adams’ local Home Depot.

“It’s super exciting, but I’m definitely not an artist,” Washburn said. “It’s something we don’t do here, and it’s interesting learning Latin culture and the process of assembly.”

The Spanish Club finished dying the sawdust Monday, and let the dust dry for Wednesday.

They started 3:30 p.m. Wednesday and hoped to be finished with the entire project by 7:00 p.m. the same day.

The carpet will be left to dry after the initial creation, and then sprayed with water to let the sawdust set and act as an adhesive.

“It’s fun but hard,” Murphy said. “I have a new respect for it knowing now how hard it really is.”

The Spanish Club invited other organizations to join in the making of the alfombra including Sigma Delta Pi, the Latino American Student Organization and Alpha Psi Lambda.

The Spanish Club set up the alfombra display giving each organization their own portion to decorate how they wanted to.

The alfombra will be on display in Doudna for the entirety of Latino Heritage Month from Thursday to Oct. 15.