Kamile Stadalninkaite, leader and mentor for her teammates 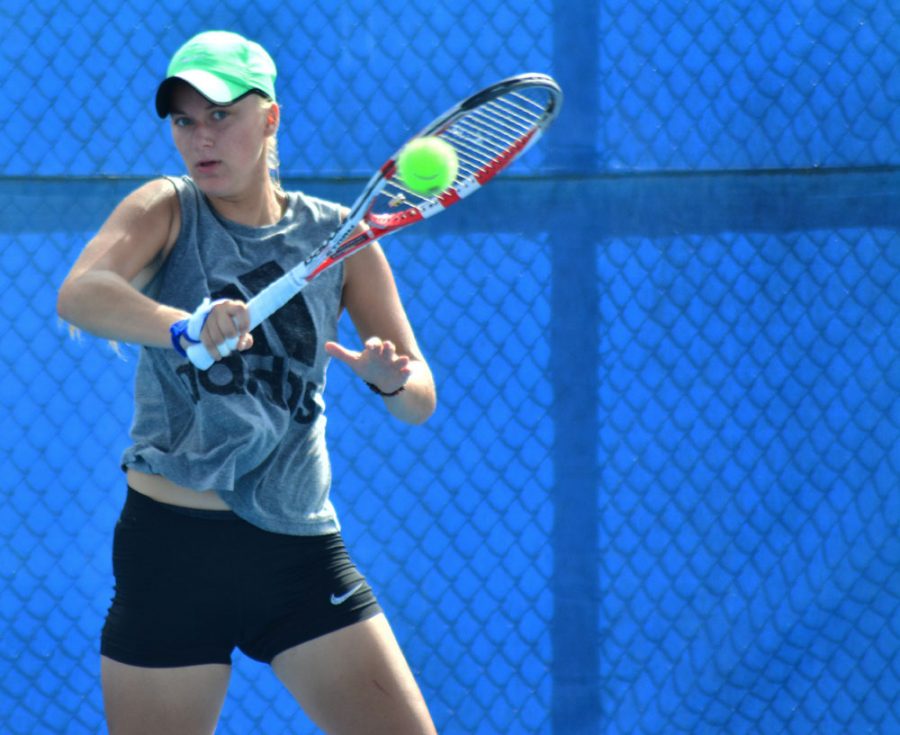 Justin Brown | The Daily Eastern News Senior Kamile Stadalninkaite practices on Wednesday at the Darling Tennis Courts. One of three seniors on the team, Stadalninkaite is helping to mentor he teammates.

One of three seniors on the women’s tennis team, senior Kamile Stadalninkaite finds herself in a position to both be a leader on the team as well as mentor her younger teammates.

The senior has consistently improved throughout her time as a member of the Eastern tennis team and is expecting a strong 2016-17 seasons.

The Naperville North high grad has been at Eastern the entirety of her collegiate career.

“I love it here,” she said. “This campus provides a very good atmosphere and the faculty and administrators are always willing to help me with anything I need.”

The senior she has played with numerous different athletes and has seen many of her friends graduate and pursue their respective careers.

When it comes to preparing for a match, first and foremost she stressed that getting plenty of sleep is essential to being both a productive athlete as well as being a productive student.

Eating enough to maintain high energy levels and staying very well hydrated were both high on her list as well.

When it comes to splitting time between the tennis court and classroom, she takes her education just as seriously as honing her skills in tennis.

“It’s a 50/50 split when it comes to class and practice,” she said. “I always give 100 percent in practice, and class gives me a great time to relax physically and focus mentally on my classwork.”

Stadalninkaite’s major is Health studies with a focus in Health Administration. She takes her classwork very seriously, just as she does with her work on the tennis court.

When it comes to getting pumped up before the Panthers matches she is very vocal in giving her team support.

“She talks to the team a lot before matches to hype them up,” sophomore Srishti Slaria said.

Stadalninkaite mentioned the music selection that the team listens to before matches also helping with team chemistry.

“The whole team listens to music before matches together, a team favorite is 21 pilots as well as different music on the radio,” she said.

Stadalninkaite feeds off the success of her teammates.

“When we win, we win together,” she said. “My teammates winning amps me up — Panther Pride.”

She does not have a favorite doubles partner; she enjoys playing with the entire team. She enjoys seeing the different strengths different players bring to doubles matches.

In the case of self-improvement, she stressed the need to stay aggressive as well as stay focused on the court and in pursuing her goals.

She is a very strong supporter of Coach Wang and really likes her positive attitude.

“She always gives us words of encouragement, through the good and the bad we always know she is there for us,” she said.

Even at their low points she said that coach Wang is always there giving encouragement.

“Coach Wang is always there as someone we can talk to before matches and whenever we need someone to talk to, no matter the time,” she said.

Although she did not elaborate to avoid any misunderstanding, she also made clear that Wang and former coach Blackburn are completely different.

Stadalninkaite is excited and looking forward to playing Friday as well as she is to playing the rest of the season with her teammates.

“Tennis is primarily a singles competition, but we always root for each other and recognize that we are teammates and friends,” she said.

The senior said that the bond the team has is already very strong.

“Even with freshmen who we have only known for three weeks, I feel as though I have known these people for quite some time,” she said. “That’s how strong our bond is.”