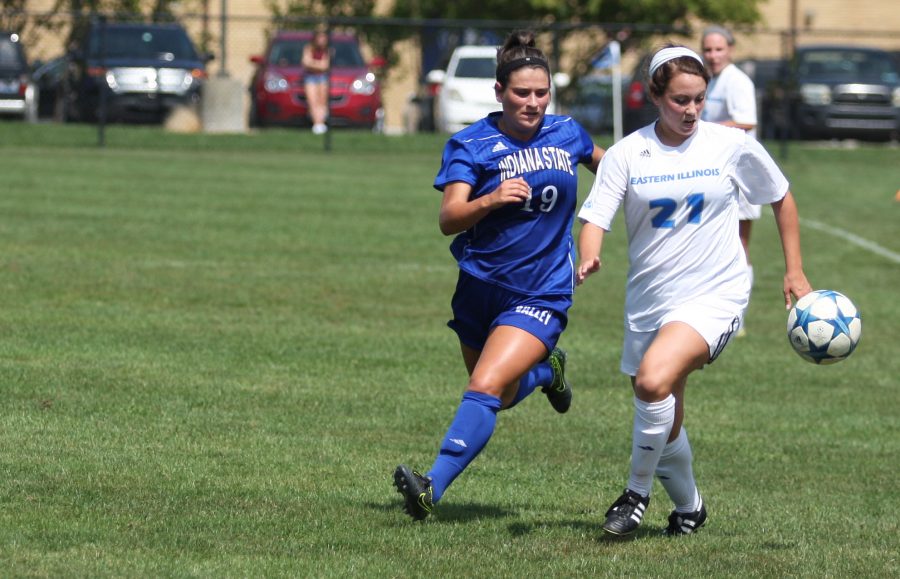 Elizabeth Held, a junior midfielder, fights for position against an Indiana State defender on Sunday at Lakeside Field. The Panthers lost the match 0-2.

The women’s soccer team will head into the weekend with matchups against IUPUI (3-2-1) Friday, before facing Northern Iowa (2-3-1) on Sunday.

Eastern continues what is a run of six straight home games before that run concludes with their first two opening games of the Ohio Valley Conference.

Although the Panthers have had a slow start in the season, their recent play has made it difficult for opposing offenses to score early.

Two of the four losses have come in the last three minutes of the game against opponents Bowling Green and more recently, Indiana State.

Coming off a 2-0 loss with goals conceded in the final two minutes of the game against Indiana State, Eastern can get back on track with schools that they have been familiar with in the past.

Eastern and IUPUI will play their eighth competitive matchup this season.

The Panthers hold four wins, two losses and a draw, in the 2015 season, against IUPUI in their last seven contests.

Northern Iowa will meet the Panthers in what also will be their eighth competitive fixture in the same weekend.

Both teams tie the series with three wins and losses with a draw.

With recent history favoring Northern Iowa, Eastern hopes to turn their fortune around in what can be a decisive game of the season.

Northern Iowa will head into the game off the back of three straight victories, most notably a 3-0 victory coming from last season.

The weekend will provide the Panthers with an opportunity to recapture the form they showed in their victory with Chicago State, as their last game before Ohio Valley Conference play comes in the form of Marian University, on Monday, Sept. 19.

Eastern’s lone goal scorers of the campaign feature two freshmen looking to make a positive influence in an attack that holds a mix of experience in the midfield.

Freshman Henar Urteaga is the first Panther to score for the women this season, while freshman Hannah Heinz added her first collegiate goal ­— a game winner ­— in which both scored in the match against Chicago State.

Urteaga and Heinz have identical stat lines for the season. Both played in five matches and have two shots.

Eastern will be at Lakeside Field for the weekend as they take on IUPUI, with kick off at 3 p.m. on Friday, followed by Northern Iowa at noon on Sunday.