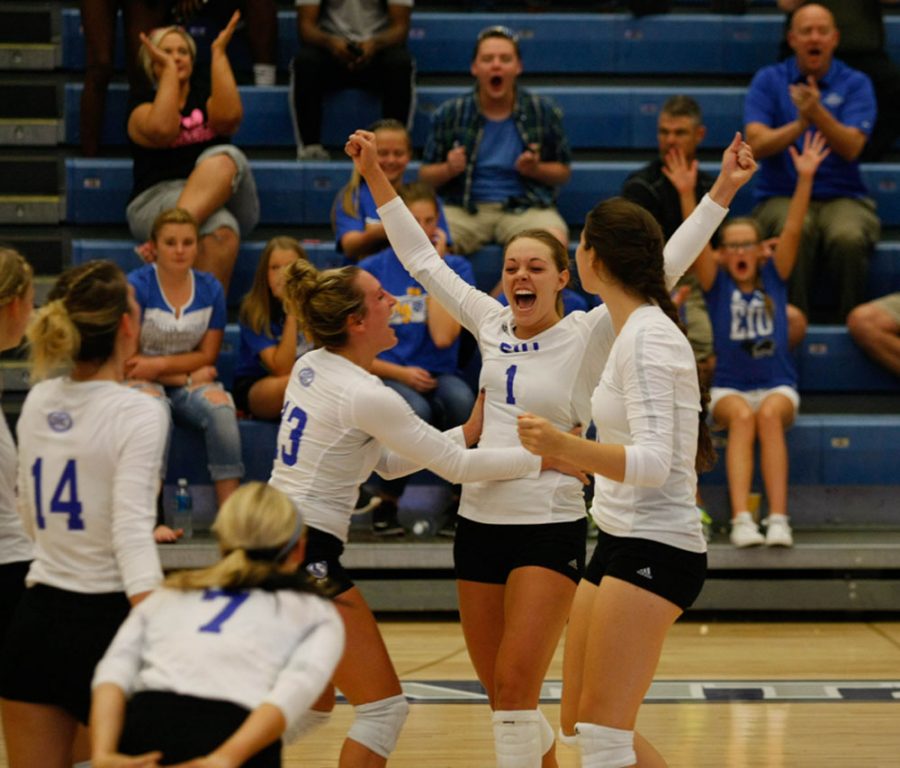 Redshirt junior Josie Winner along with teammates and fans celebrate a point during a match agaisnt Butler on Tuesday, Aug. 30 at Lantz Arena. The Panthers lost 3-2, Winner finished with seven kills, an ace and two blocks.

After two more losses to start the weekend tournament in Memphis, the Panthers were 0-6 with one game left and one more chance to find that first win of the season.

They responded in convincing fashion by taking advantage of another winless team in Jackson State.

Eastern finished its final game of the Tiger Invitational with a straight set win against the Gamecocks, and moved to 1-6 on the young campaign.

Although it was another tournament with more losses than wins, Eastern coach Sam Wolinski said she is still confident in the direction her team is headed in.

“It’s about the process and as we continue to improve and become consistent in certain areas of the game the outcome will come in terms of wins,” Wolinski said.

The Panthers won just one set combined in the first two games of the tournament against Louisiana Tech and Memphis, but the highlight was the game against Jackson State.

With such a young team losing streaks can prove to be detrimental, and Wolinski said it was important to come away with that win to end their skid.

“We didn’t win the first two matches but continued to make strides in overall growth as a team,” Wolinski said. “The win against Jackson State was important because we executed in all areas and won in three straight sets.”

Execution certainly was important as the Panthers continued to grow in the tournament and match against Jackson State.

The Panthers got off to a slow start, trailing 4-0 early in the first set before sophomore Taylor Smith and Freshman Maggie Runge teamed up in what was a turning point of the set and match

Smith started off the attack with a kill while Runge followed on the next play with a crucial block to cut the deficit in half.

The block sparked a little run, and the Panthers soon found themselves with an 8-7 lead in the set.

After taking its first lead, Eastern never trailed again in the set and used another 7-0 run to eventually spark the 25-15 victory.

It was the Panthers match to lose after that as momentum was on their side, winning the next two sets and coming away with the big win.

While the freshmen continue to gain experience on the team, some sophomores and juniors that are proving to be the difference.

Smith also still put in another quality performance in what has already been an impressive campaign for the sophomore.

Smith finished the tournament with two triple-doubles to add to her impressive stat sheet this season.

With seven games in the books and the Panthers searching for consistency, the upcoming games will prove to be important.

They begin the search for consistency with a road game against Western Illinois Tuesday night.

While Eastern will try for its second win in a row, the Leathernecks will be searching for their first win of the season.

“Western is looking for their first win of the season so they will be hungry for that win especially at home,” Wolinski said. “We need to win the serve and pass game, and our blocking has been strong so we need that to continue.”

Western Illinois comes into play at 0-6 this season, and the most recent loss came against Butler.

The match tips off in Macomb Tuesday night at 7 p.m., and the Panthers follow this midweek matchup with another tournament.

Eastern will host its annual EIU Panther Classic during the upcoming weekend.