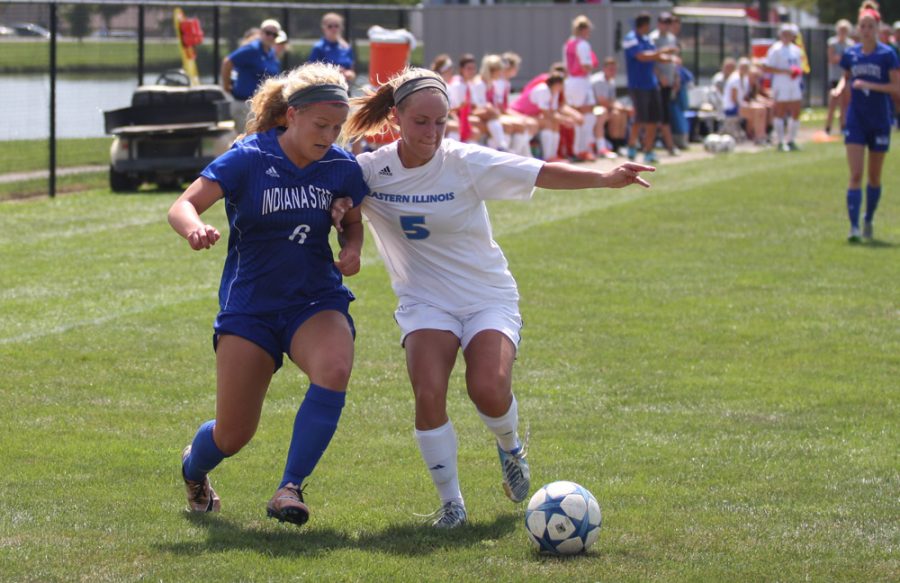 Junior Midfielder Ali Carlson fights for position Sunday against Indiana State at Lakeside Field. The Panthers lost 2-0 to bring their season record to 1-4.

The Eastern women’s soccer team found the win column for the first time in Friday’s 2-1 win over Chicago State and narrowly missed a weekend sweep before falling 2-0 to Indiana State.

Both teams in Sunday’s game had trouble finding the back of the net for large parts of the game, until Indiana State’s Katie Wells broke the deadlock with two minutes remaining of regulation, before fellow Sycamore Pam Silies added another to ensure a 2-0 victory at Lakeside Field in the home opener of the season for the Panthers.

The game was scoreless until nearly the 89th minute when Indiana State put away the Panthers with Wells’ goal. Eastern had a chance to build off their first win of the young season after beating Chicago State 2-1 in Chicago on Friday.

Freshman Henar Urteaga and freshman Hannah Heinz netted the two goals in the Panthers’ win on Friday, but neither of them or the rest of the team could register a shot on goal in Sunday’s loss to the Sycamores.

Caitlin Glascott assisted the first goal for Indiana State after a Sara Teteak was rebounded and knocked in by Wells.

Following the late goal from the Wells, Eastern pushed forward in search of an equalizer straight from the following kickoff.

While Eastern moved further up the field, a misplaced pass in midfield presented an opportunity for Pam Silies to break free for a one-on-one chance with Teteak, in which she capitalized with a scoring finish, giving Indiana State a late insurance goal at the 89:35 mark.

Sycamores goalkeeper Brittany Sam Roman essentially had a day off despite playing the whole 90 minutes, with no saves made, as the organizational work of her teammates made it hard for the Panthers to have clear-cut chances on goal.

As well as both teams keying in on a defensive matchup, there were times when it got physical as the game wore on, with both teams doing everything they can to cut one another’s momentum.

In total, there were 21 fouls committed in the matchup. Indiana recorded six fouls, but the Panthers were lucky to have referee Mike Wilson keep the cards in his pocket, as they recorded nearly three times as many as the Sycamores had, with 16 fouls.

Indiana State had ten shots, with five being on target. Eastern Illinois recorded four shots, none of them on target.

Wells and midfielder Maddie Orf are the only players of the afternoon to register multiple shots, with all others from both teams just managing a single shot.

Eastern is now 1-4 on the season and will be at Lakeside Field again this Friday afternoon at 3 p.m. as they take on the Indiana-Purdue University-Indianapolis Jaguars, who currently have three wins and two losses, along with a draw.