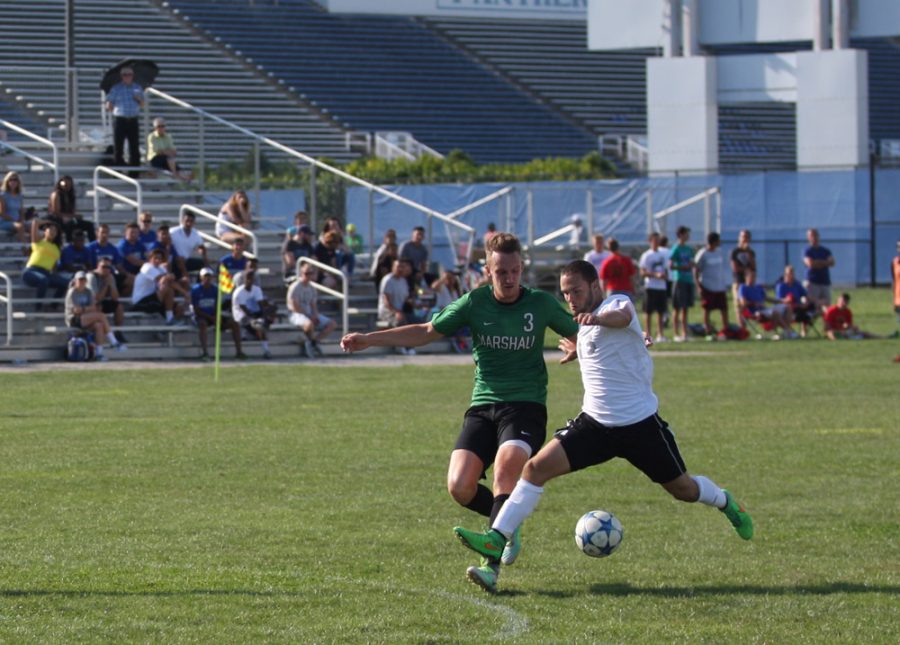 Sophomore Forward Trevor Kerns advances the ball in a match against Marshall on Sunday. Panthers lost 1-0, finished with one shot on goal.

The Eastern men’s soccer team picked up their first win of the season Friday in a 2-0 win over the University of Wisconsin-Green Bay, but failed to secure its second in a 1-0 loss to Marshall on Sunday.

It was a trio of substitutes that carried the Eastern offense in their 2-0 win over Green Bay.

Junior Tyler Enright made his presence known coming off the bench, Enright delivered the first goal of the game for the Panthers in the 38th minute of play. Receiving a cross pass into the box from fellow substitute Yann Nsoga, Enright gave Eastern a 1-0 lead on a header into the left corner of the net.

With a 1-0 lead in their pockets, the Eastern defense buckled down to hold Green Bay to just one shot before the half.

There were many tense moments in the second half for Eastern, however. The Green Bay offense controlled the ball on their side of the field for most of the half and accumulated eight shots on goal, but the Eastern defense remained stout and kept Green Bay from finding the back of the net.

“There’s going to moments in the game, in any game that’s over 95 minutes where you lose control of the game,” Eastern coach Kiki Lara said. “Fortunately for us it was less than more, and in those moments we just have to be gritty defensively, we have to be organized and aware and we leaned on that and we got it done.”

In the closing seconds of the game Eastern substitute freshman Alex Castaneda broke away from the pack after receiving a pass from senior Davis Wegmann, and shot a goal past Green Bay goalkeeper Kyle Ihn, putting away the Phoenix.

Lara was not satisfied with his team’s effort in the second half of Eastern’s 1-0 loss to Marshall at Lakeside Field on Sunday, he said.

“It wasn’t good enough from us today,” Lara said. “Because in the critical moments of the game we weren’t gritty enough to seal the game off. We played well in possession, we did some things well in going forward and breaking pressure, but defensively in a critical moment we didn’t get it done and we got a loss.”

The Eastern defense carried over its strong play from the Green Bay game into the first half of its contest against Marshall. The Panthers held their opponent to zero goals and just two shots in the first period. The second half proved to be a whole different story.

After playing the first half with very high energy and aggressiveness, Eastern conceded a goal in the 50th minute of play. Marshall’s Carl Diaz-Salcedo headed in the goal. Lara credited the goal to a mental relapse on defense.

“It’s just not tuned in, not gritty enough and not focused. That right there is not being focused coming out of the half and giving a team that didn’t deserve a goal a goal,” Lara said.

With 30 seconds to play in the game Eastern’s Trevor Kerns missed a would be game-tying goal in a second half that was full of missed offensive opportunities for the Panthers.

“Give credit to them (Marshall); they blocked shots, they battled, they were tough defensively there at the end, they made it difficult, I’ll give them a lot of credit,” Lara said. “But I also think that from us were not sharp enough in the final third just yet. We are working on that, but in that process of getting better at doing that we were still not sharp enough defensively to seal the game and make it a zero-zero match.”