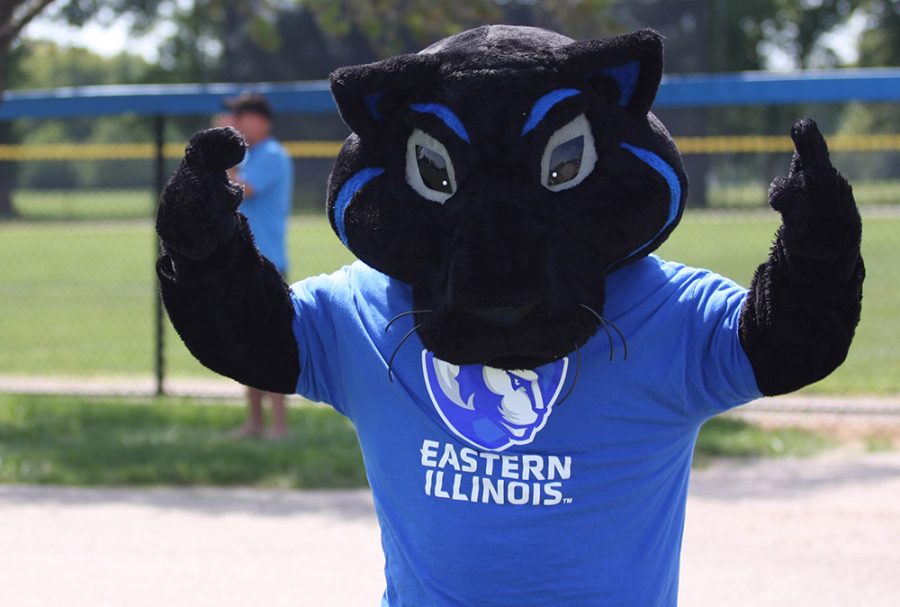 Eastern’s athletic department chose three anonymous individuals to sport the ‘Billy the Panther’ costume at events and games throughout this academic year.

Rich Moser, Eastern’s sports information director, said two students are mainly responsible for covering most of the athletics games while the third student serves as a back-up. However, all the students embody the panther spirit while working.

Billy the Panther has been known as “Billy” since the late ‘60s. Not until 2008 was the mascot officially named “Billy the Panther.” Another version used in the 2000s was named “Prowler,” retired the same year.

The identity of the person behind Billy is kept a secret. Changes to the mascot’s appearance have been made because of stolen costumes, updated styles and a need for something new.

As far as the gender of the mascot goes, Moser said he is not sure if there is a specific reason why Billy is a male panther.

“It may be based on the fact that the mascot was used primarily for male sports and slowly for female sports as Title IX was implemented,” Moser said.

Depending upon which event Billy is at, he wears the corresponding uniform to match the players. He has baseball, softball and basketball jerseys as well as a blue Eastern T-shirt.

Since Billy the Panther is the face of the school, the identities of the students who wear the costume are kept secret.

Lewis Lancaster, a 2007 graduate and former Billy the Panther, said part of the mystique is not knowing who is in the suit.

“Of course some of my very close friends knew, but very few,” he said.

Moser said when choosing who will wear the costume, the athletic department is interested in people with previous experience as a mascot at a high school level or from an internship. Prior to getting the role as Billy, Lancaster went to mascot camp for two summers, which ran in conjunction with the Universal Cheerleaders Association’s camp.

“I learned a lot there about how to act and build the character,” Lancaster said.

The athletic department said they like having energetic and interactive mascots. In the past, some mascots who can dance will have used their moves with other squads, or have a solo dance session.

Since the suit conceals the student’s identity, it allows him or her to have more confidence engaging with fans, Moser said.

Ryan Gruebel, a 2015 graduate and also a former Billy, said during his tenure as the mascot, he would go with a few of the players and an assistant coach to County Market to promote the women’s basketball team’s upcoming season.

Gruebel, as Billy, took photos, gave high fives and passed out information on the sports seasons.

“It was a great experience. Everyone recognized Billy and was so happy to see him. It made it more fun and helped us in our promotion,” Gruebel said.

When games get too hot, the athletic department ensures Billy has “adequate breaks and water or Gatorade available,” Moser said.

If it is too hot, the amount of time someone is in the suit is cut back for safety precautions.

Lancaster said he got multiple breaks on hot days, and sometimes even removed the suit completely.

“The trick is finding a place to hide so you can take the head off and avoid the public,” Lancaster said.

Both Gruebel and Lancaster said they would be Billy again in a heartbeat.

“It is a great resume builder, and it was a very important part of my four years at EIU,” Lancaster said.