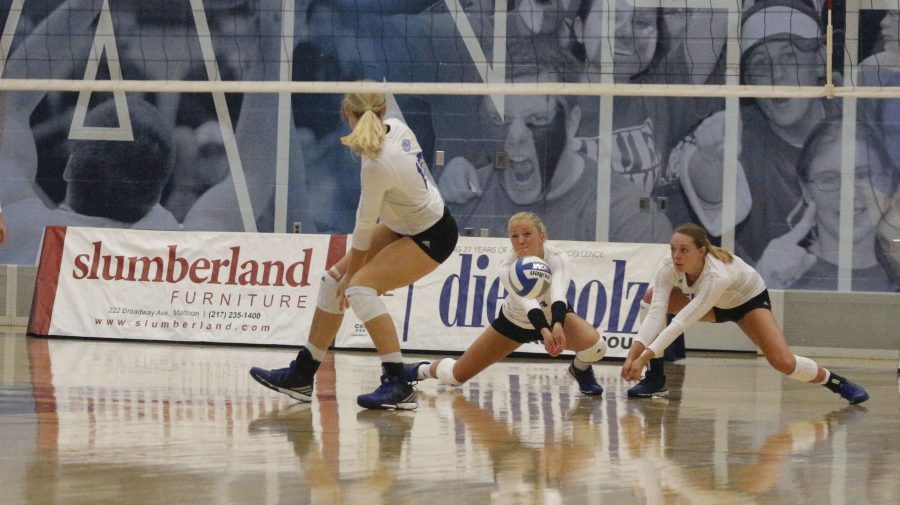 Lindsey Powers returns a serve while teammate Josie Winner backs her up in a 3-2 loss to Butler on Tuesday in Lantz Arena.

On a team with no seniors out of six newcomers, growth and improvement are focal points in any sport and especially volleyball.

That was the case for the Eastern volleyball team Tuesday night as it fell to Butler in five sets.

The Panthers played arguably their best match of the season thus far, and sophomore Taylor Smith said it was not even a tough loss to take in.

“I don’t think it was a very tough loss because from this weekend we have improved by a 100 percent,” Smith said. “It was literally like a night and day difference.”

Eastern’s growth was even apparent in Tuesday’s match after bouncing back from a dismal 25-13 loss in the first set.

The Panthers followed that with wins in back-to-back sets to take a 2-1 lead in the best of five match.

Although the momentum was on their side and the home faithful were cheering loudly in Lantz Arena, the Panthers dropped the final two sets of the match to drop to 0-4 on the season.

“Butler is by far the best team we have played in our first four matches,” Eastern coach Sam Wolinski said. “Our girls played really hard, and that is the type of volleyball were capable of playing.”

The Panthers had some spirited performances across the board along with some girls playing in new positions such as junior Hayley Richardson stepping in as the libero.

Richardson finished the night with nine digs and four assists in her new role as a Panther.

And after her performance Tuesday night, Wolinski said Richardson will continue to play that position for the time being.

Smith also continues to lead the way for Eastern, as she came one dig shy of a triple double.

Smith is coming off a weekend of being named to the All-Tournament team, and followed that up with 17 kills and 15 assists against the Bulldogs.

Junior Maria Brown added to the attack with seven kills and 12 digs on the night, while red-shirt freshman Gina Furlin posted 18 assists and seven digs.

“We had one practice to get ready for this match, and they did a really good job of making themselves better,” Wolinski said.

While the Panthers are aware of their growth as a team thus far, they are also still searching for that first win of the season.

They will get that shot with another tournament coming up this weekend in Memphis, Tenn.

“We raised the bar at practice Monday and kept that tonight so we just need to bring that same energy,” Wolinski said.

The Panthers then wrap up the tournament against Jackson State Saturday afternoon.

“It’s just a matter of getting out there and no fear and being aggressive,” Wolinski said.