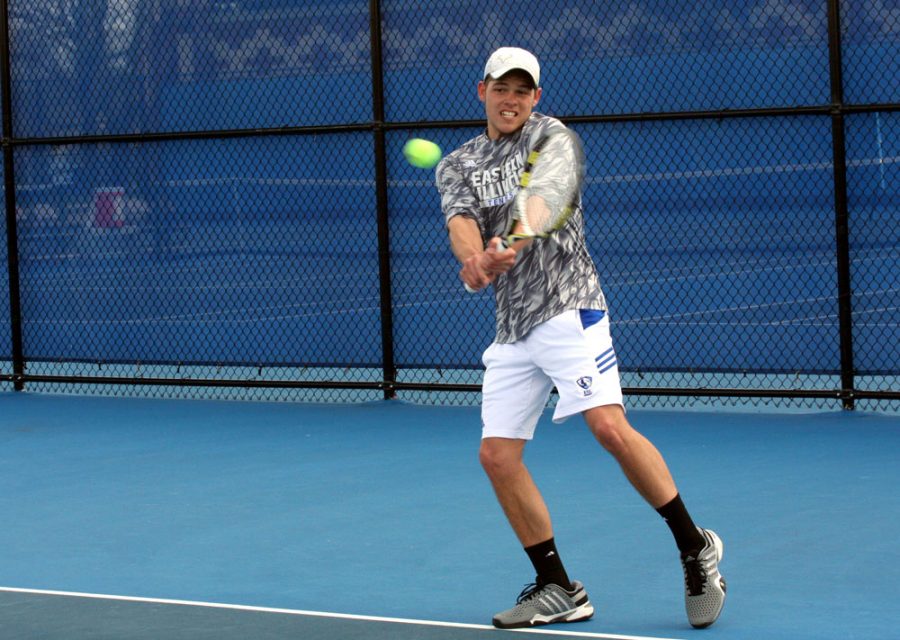 The Eastern men’s tennis team is getting ready to start its season on Sept. 16.

The team has already started practices and is close to its first matches of the new season. There are nine players on the team, four of which are returning from last season. The other five players are freshmen. These nine players are directed by Sam Kercheval, who is starting his second year as the team’s head coach. Last season, the men had a record of 4-15, with a 1-5 home record and a 3-10 record on the road.

Kercheval recognized the work he has to do with new players coming in.

“This year, we have five of the nine guys new to the team, and they are from five different countries,” he said. “That is five different backgrounds, experiences and cultures that we are bringing together with the returning guys to make one team. It doesn’t just happen that everyone comes together, so we are going to work really hard on that, as well as on our tennis.”

Coach Kercheval is optimistic of this season. Though it is only his second year with the team, there are some things he took away from last season.

“Last year was my first year at EIU, so obviously, I learned a tremendous amount,” he said. “The biggest thing for me as the coach is that I saw what the level is of our opponents and in particular the Ohio Valley Conference. So I feel I have a better idea what it is going to take to compete with our schedule and in the conference. It still all comes down to executing the fundamentals, though. Knowing when to hit crosscourt or down the line, how to approach, making serves and returns, it’s all fundamentals.”

He also discussed how this year will be different from last year.

“This year and last year are going to be pretty different in a lot of aspects—most notably that we have more than half of our guys new to EIU and our program,” he said. “The No. 1 focus this year, and the years to come, will be having the right culture in the program. I don’t believe you can have success on the court without having a great culture within your team.”

Kercheval said he believes with such a young team it is not appropriate to put expectations of wins out on the court yet. He believes if the team puts in the effort each and every day, the wins will come. His expectations for the team are to set standards and to meet them by working hard every day.

The men’s tennis team has three tournaments this fall, two of which are at home. The two home tournaments will be round robins, where Eastern plays the three teams it hosts one time each. The first, the EIU Invitational, will be Sept. 30. There is also an alumni match on October 15, where the team invites graduated men and women players to come back to campus to play the current team. In the spring, the men’s team has 23 dual matches, with four of them at home.