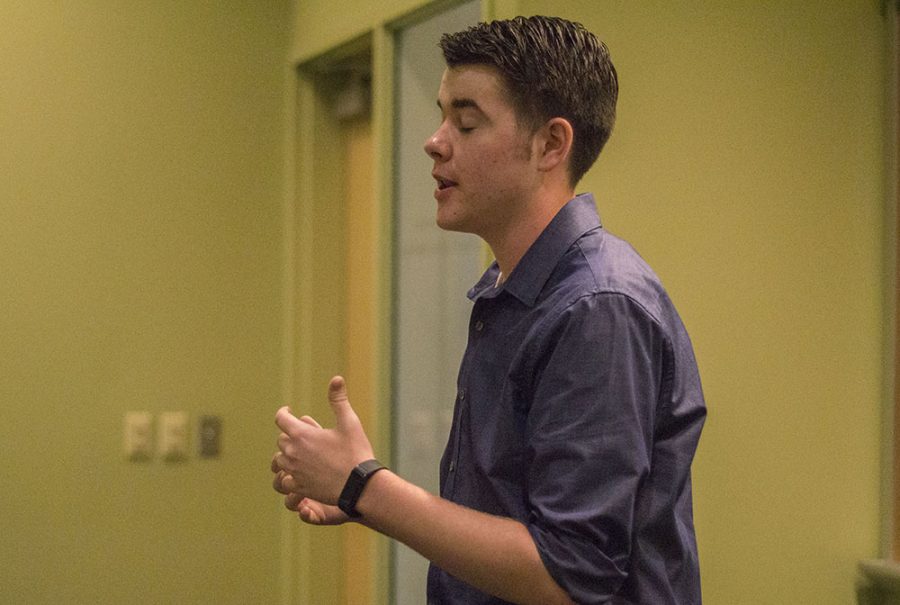 Frank Monier, a junior business management and theatre double major, practices for the part of Eddie in the play “Dogfight” Tuesday in the Doudna Fine Arts Center. Monier said although he was confident in his ability to portray this main character, he still felt angst before his audition. “The butterflies are always there,” Monier said.

Hopes were high in the Doudna Fine Arts Center Tuesday night as students auditioned for a part in the musical “Dogfight.”

One of these students was Frank Monier, a junior theatre arts major who has been in 22 plays in his educational career.

Even with this experience, Monier said he still gets the jitters when auditioning.

“I’m always nervous before a show, but I’m ready to get to it,” Monier said.

Monier auditioned for the role of Eddie Birdlace, the male lead in “Dogfight,” a musical about a group of soldiers who try to find the ugliest girl in town and take her to a party to celebrate their last night before deployment.

Eddie ends up finding a girl named Rose, who teaches him a lesson about compassion.

“Musicals are my favorite because they pose a challenge to me,” Monier said. “Eddie is a different type of character than I’ve done before. He has a lot of layers. He’s something that I have never done before.”

Monier emphasized the importance of auditions.

“It’s important to take all opportunities that are handed to you,” Monier said.

Senior elementary education major Kerry Takash said she was feeling calm because this is her sixth audition at Eastern.

Kerry Takash was auditioning for the role of Rose and Marcy.

“I like Rose because of the sweetness of her character. She’s a character that I connect to,” Kerry Takash said. “I like her kindness and compassion.”

Though Erin Takash, an elementary education major, was also excited for auditions, the experience was bittersweet for her.

“I feel really sad at the same time, because I’ll be student teaching in the spring and I won’t be able to do the spring performance,” she said.
Erin Takash was also auditioning for the role of Rose and Marcy.

“Rose is very confident, and I like what she stands for, because she stands up for what she believes in, just like how I was raised growing up,” Erin Takash said.

Liz Allen, a junior theatre arts major, said she knew 90 percent of the monologue she was using for her audition, but she was still nervous.

Allen is not picky about what role she wants and said she will take anything she can get.

“I just want to be involved,” she said. “I did four plays working backstage with the crew.”

After her audition, Allen said she ended up getting 90 percent of her lines right, so she felt good about that.

“It’s out of my hands now,” Allen said. “I did my audition to the best of my ability.”

Braden Grayson Zajler, a freshman English major, said before his performance that he had mixed emotions but was trying to stay positive.

In the last show Zajler, a transgender man, was mis-gendered, but he wants to change that for this show.

“In the last show I did, I wanted a male role, but got put into a dress. There was a lot of mis-gendering,” he said.

Zajler said he was auditioning for a male role because he respects who he is.

“I know in theater the role you get is what you get, but my main goal is to get a male role and to show there’s no barrier to transgender people in theater,” Zajler said.