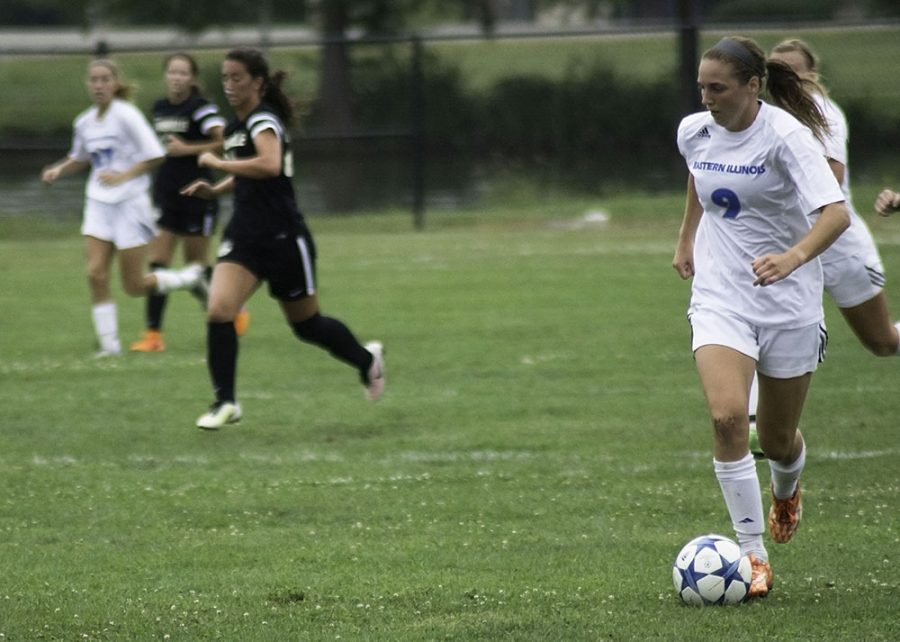 Freshman fowrward Sarah Dewolf advances the ball during an exhibition game against Evansville on Aug. 14 at Lakeside Field.

The Eastern women’s soccer team struggled to find offense against the Illinois State Redbirds, and it showed. The Panthers lost 4-0 to the Redbirds Sunday for their third-straight loss to open the season.

From the opening minute, the Redbirds found their cohesiveness early on, having 11 shots on goal before breaking the deadlock with two quick goals scored 33 seconds apart from the 21st and 22nd minute, by freshman Abby Basler and junior Kelli Zickert. It was both Basler’s and Zickert’s first goals of the season, with Basler’s goal being her first for the program.

With a composed and organized Redbirds team that played with fluidity and pressing, the Panthers failed to register a shot in the first period. The only shot Eastern had in the game came later on in the 2nd half from sophomore defender Kate Olson.

Lauren Koehl, the 2015 recipient of the Julie K. Heidecke award for the Redbirds, having assisted Zickert’s goal earlier in the game, later opened up her goal scoring account for the season to extend Illinois State’s lead to 3-0.

Senior Brianne Richards later added the game’s fourth and final goal in the 85th minute, after pouncing on a rebound forced from freshman midfielder Kate Del Fava, who had a header on goal saved by Eastern freshman goalkeeper Sara Teteak.

The Redbirds had 38 shots, with 23 on goal. Teteak had another strong performance despite what the score line suggests, as she had faced 19 shots. Three of the goals allowed by Teteak were rebounded efforts after she made her initial saves.

It was a night when the movement of the Redbirds opened up a lot of passing lanes, with their first goal of the game coming from a one-two pass before a cross from the right side of the field found an opening in the penalty area.

Given that Sunday was also Julie Heidecke day, the Redbirds had a moral incentive to go for a hard earned result. Heidecke died on April 29, 1998, after an automobile accident.

Heidecke was a former soccer player and captain that played for the Redbirds for one season. Sunday marked the 20th anniversary of the Julie Heidecke Program, which honors one player from Illinois State every year that embodied the spirit and personality of Heidecke, as well as commemorating the impact she made in her short time with Illinois State.

It was a special game that featured four alumni from the original Redbirds’ 1996 women’s soccer team in attendance.

The Panthers, for most parts of the game, had little possession to work with, as it was difficult to retain against a Redbird team that always defended the smaller areas of the pitch in an effort to continually win the ball back.

Following the game against Illinois State, the Panthers look to grab their first win of the season this Friday at Chicago State University. Kick off is set at 3 p.m.