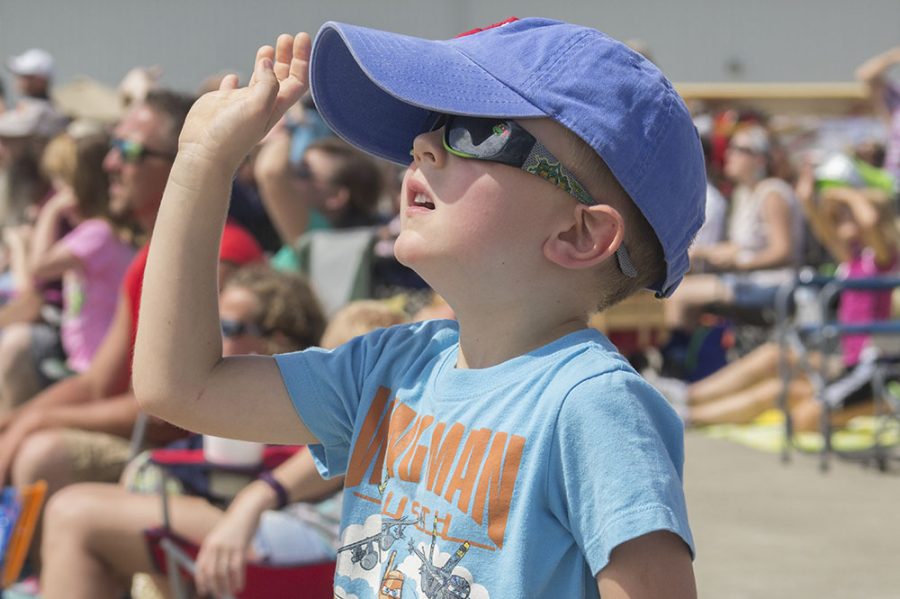 Rowan Faust, a 4-year-old from Philo, Illinois, waves at Wingman Teresa Stokes as she flies past him and his family during the air show at the Coles County Memorial Airport Saturday.

From the time he started flying as a child, Erik Edgren’s heroes were always air show pilots.

On Saturday, he got to fulfill his dream of being one at the Coles County Memorial Airport air show.

After his show, in which Edgren performed comedic stunts, many children watching came up and eagerly asked for his autograph.

Though Edgren said there is an element of danger in his air show flying when he does tricks for the audience, he loves the sense of relaxation he gets from flying recreationally.

“I don’t need a shrink. I’ve got an airplane,” Edgren said.

Pilots like Edgren took to the sky on Saturday at the Coles County Memorial Airport, where they zoomed, flipped, rolled and made loops across the sky.

In one act, a woman even stood on the wing of an airplane as the audience waved.

Jim Stewart, a Charleston resident, has been to the air show every year for 25 years, except for last year, when it was canceled because of construction on one of the runways.

Though he was disappointed he could not see the air show last year, he was excited to see it Saturday, on what he called a “good year” for the show.

Stewart is a pilot himself and said he enjoys seeing aviation of all types. As a member of Charleston’s model airplane club, the Charleston Stone Flyers, he even enjoys seeing the model planes flown at the beginning of the show.

Kristin Faust, of Philo, took the 45-minute drive to Mattoon with her family to see the air show because her son Rowan, 4, loves airplanes.

Faust has been to the air show in Chicago, but he liked the fact that the one in Mattoon had an announcer and colorful commentary.

“You get to learn about the planes,” Faust said.

Quinlan Graham, of Decatur, has also been to Chicago’s air show but said the Coles County Memorial Airport show had its own unique aspects.

Graham has enjoyed looking at airplanes since he was a child and is fascinated by the way they work.

“Being able to get off the ground and able to fly,” Graham said. “It’s just cool. It’s something humans weren’t meant to do and we did it.”

When planes were not being flown, they were being shown off on the ground. Children and adults alike explored various planes, some from World War II, that were on display at the airport.

Mike Young, a colonel of the Missouri Wing of the Commemorative Air Force, was showing off a B-25 Mitchell bomber, which was built in 1944.

The Commemorative Air Force is a national group that maintains and rebuild the planes.

Young said the kinds of airplanes he was showing off would have been used to look for the enemy during the war.

The B-25 Mitchell bomber was used in the United States as a training aircraft and was painted in honor of the 345th Bomb Wing that flew and fought in the Pacific Ocean.

Bob Moore, another colonel of the Commemorative Air Force, said people had already been signing up to ride these historic planes early in the day of the air show.

“This is something that’s really rare,” Young said. “There’s only about 20–25 of these airplanes flying now. It’s just really a unique experience to fly around and experience what the men and women experienced during World War II to keep us free.”