Unrest in America on display in Tarble 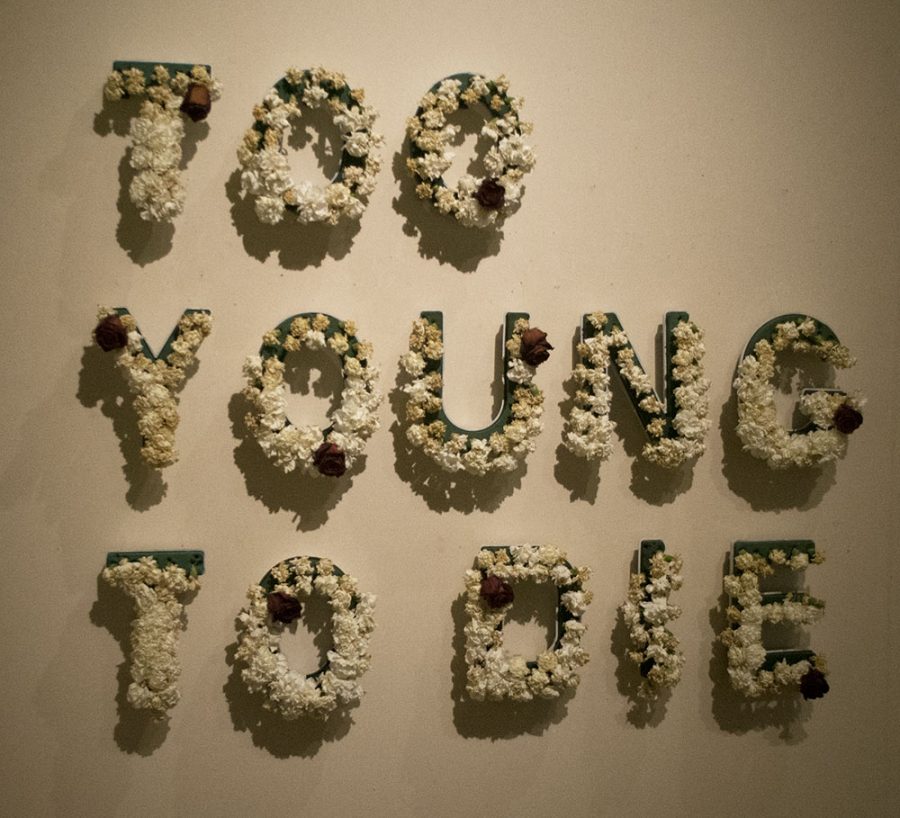 Director and Chief Curator Rehema Barber was eager to explore the current unrest in America regarding the relationship between people of color, the justice system, policing and violence and to bring her findings to the Tarble Arts Center for others to see.

“The exhibition is not only the culmination of research that I’ve done on those topics over the last year, but a visual dialogue that illustrates my findings,” Barber said.

“My hope is that I’ve given audience members something to think about why we are seeing the current events (and) issues playing out on social media, on the news and in our communities,” Barber said.

Barber was familiar with most of the artwork and the artists. Each piece she chose to be on display is the artist’s interpretation of history and the economic and power struggle that minorities in America face today.

“It’s hard to pick a favorite from the show, as I like all of them, but if I had to choose one I’d pick Cheryl Pope’s ‘Too Young To Die,’” Barber said. “The work is a funerary piece or commemorative display, while also serving as a social commentary about urban violence and the deaths of young people. I also think it underscores that there are a lot of people dying senselessly and early in their adult lives to violence.”

Jason Patterson, an artists featured in the exhibit, will be speaking about his work 11a.m. Sept. 8 in the main gallery of the Tarble Arts Center for the A.L.L. Gallery Talk.

Patterson’s piece  “On White Supremacy Racial Equality And the Legacy of Abraham Lincoln” is a large wooden structure with a drawn portrait of Abraham Lincoln followed by a statement he made in Charleston that Patterson said was an “overtly white supremacist statement.”

Patterson said that about 60 to 70 percent of the work he put into his piece was research of the history behind his artwork.  His research consisted of readings from “Founders’ Son” by Richard Brookhiser, the “Complete, Unexpurgated Lincoln Douglas Debates” edited by Harold Holzer, “The Half Has Never Been Told” by Edward E. Baptist, “Lincoln and Black Freedom” by LaWanda Cox and “Slavery by Another Name” by Douglas A. Blackmon.

“What inspired me to do the piece is what always inspires me: The urge to correctly contextualize history, mostly concerning the African American condition,” Patterson said. “I think ‘A Dark Matter’ is a really great opportunity for people to see art work by and or about the African Americans and the African American experience, all in a museum setting. This is a social perspective and a history that needs to be better normalized in the United States”

Sheila Pree Bright, a fine arts photographer who is also featured in the Tarble Arts Center, took a more modern approach in her work by traveling to all the different cities affected by the recent police shootings.

Her recent project, titled “#1960 Now,” juxtaposes the youth of the 1960s civil rights protests to the young protestors of today. Some of her photographs from the series can be found in the Dark Matter exhibit.

“We are going through a critical time in our country and even in the world, and I think young people are the ones that are going to change that,” Bright said.

Bright is based in Atlanta, but has been traveling all over the U.S. in order to interact and capture the Black Lives Matter protests.

“Each city was different,” Bright said. “When I went to Ferguson I went during the aftermath. I never felt so much tension in the air.”

Bright also visited Baltimore, and stated that what she saw there was nothing like what the media shows.

Bright has many other photographic projects featuring her interpretation of race in the U.S., and her work can be seen online, as well as on display.

“If I can change one person’s heart, just get one person to open up their mind, I think I’ve made a difference,” Bright said. “People always call me an activist, but I’m not an activist, I’m taking action.”

Bright’s other work can be found on sheilapreebright.com.

Scott’s pieces consist of shots of public performances that he performs himself, shots of protests, other interpretations of history and current events.  His public performance photo “I Am Not a Man” is an inverted version of the sanitation workers’ strike in Memphis, Tenn. back in 1968.

“In this strike the workers wanted better wages, but also insisted on being treated like human beings. It gets to the heart of humanity for black people. Insisting on humanity and not simply ending Jim Crow segregation and laws was an important shift for the civil rights movement and, in a way, was a processor to Black Lives Matter. It is a powerful legacy,” Scott said.

“In 2009 the ‘first black president’ was in the White House and there was a myth promoted that America had entered a post racial society, meanwhile one in nine young black men were in prison, police were brutalizing and killing black people in disproportionate rates and by every measurable quality of life measurement: black people were as bad off as we were in the 1960s,” Scott said. “The performance was both upholding the importance of the civil rights ear, but simultaneously highlighting the limitations of that movement and the inequality and oppression that still exists.”

Another one of Scott’s pieces displayed in the exhibit is a shot of him being blasted with a high-powered fire hose, similar to the ones used during the civil rights protests.

“Being blasted by the high power water jet of a fire hose hurt and the water was cold in October, but that doesn’t tell you much,” Scott said. “It felt very powerful connecting the strength and courage of civil rights demonstrators in 1963 who withstood similar treatment to end Jim Crow (everything from daily humiliation of having to enter the back door of a restaurant to the constant threat of lynching).”

Scott, is not only having multiple works featured in the exhibit, but is also participating in a public lecture on Oct. 6 in the Doudna Fine Arts Center Lecture Hall to talk about his work.

“The hardest thing is finding the ways to typify some of the big questions confronting humanity in a way that it resonates with people,” Scott said. “In doing this, (I am) really finding the ways to show that the system that we live under is not eternal and that it is outmoded and worthless.”

Scott’s work can be found on his personal website dreadscott.net.

“A Dark Matter” will continue to be on display through Oct. 30, with other events consisting of the other featured artists and Tarble Arts curator.