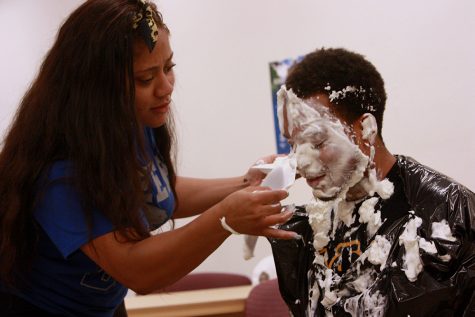 Molly Dotson Senior kinesiology and sports studies major Kathryn McIntosh helps senior marketing major Chris Johnson “CJ”, the social chair for Alpha Phi Alpha, clean off his face at a mixer on Thursday Sept. 10, 2015. Mixers are one of the many events fraternities and sororities hold on campus. 12 of the 26 different organizations are registered for the fair.

Fraternities and sororities make up almost one-fifth of the student population at Eastern, and that number has a chance of increasing after Wednesday.

Each fraternity and sorority presents themselves in different ways.

This year’s fair is an opportunity for students to see Greek organizations that were not at Pantherpalooza, or ones they may have overlooked.

Colton Janes, a graduate assistant for Fraternity & Sorority Programs, said the fair will be “free flowing” and have light music playing in the background to set the mood for the environment.

Students can walk up to an organization’s table and ask each fraternity and sorority questions to get more details about Greek life and their organization.

Fraternities and sororities are not obligated to participate in the fair, so not all of them will be there, Janes said.

12 of the 26 different organizations are registered for the fair.

Janes anticipates a lot of students will show up to the fair.

“I’m excited to see my students,” Janes said. “They’re the reason I work and I love what I do.”

Fraternities and sororities are currently in the process of recruiting students. At the fair, students can ask about information on recruitment.

Janes recommends students come to the fair with an open mind and that they absorb as much information as they can while they are at the fair.

“As a graduate assistant, I expect (Greek organizations) to provide straightforward examples of what they do as an organization,” Janes said. “I hope they would care to share their academic challenges, their extracurricular involvement in other RSOs on campus whether it be University Board, Student Government, resident hall councils.”

This year’s fair is different from the previous fairs because Fraternity & Sorority Programs improves by building upon the challenges and successes of previous years.

Janes said this is an important event to the campus because Eastern’s sororities and fraternities make up 15 to 20 percent of the campus population.

“It’s important that our students are only great leaders for organizations but also for the community they serve in Charleston’s neighboring areas as well,” Janes said.