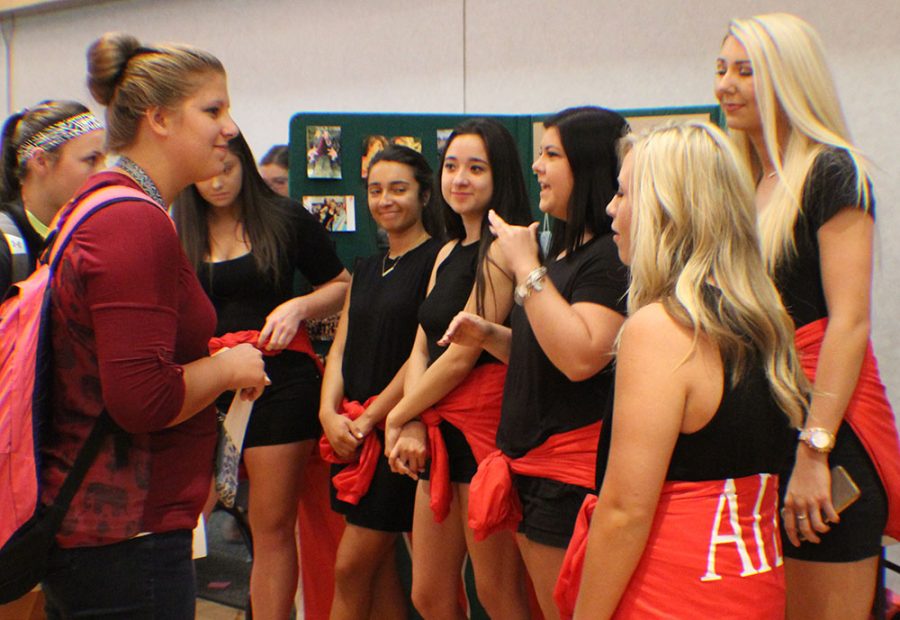 Members of Alpha Gamma Delta talk to students about their sorority during Pantherpalooza in the Grand Ballroom of the Martin Luther King Jr. University Union Wednesday.

Groups from many areas of Eastern’s campus came together for one day during Pantherpalooza.

This year, because of weather concerns, the event was moved to the Martin Luther King Jr. University Union’s University and Grand Ballrooms.

The organizations used different tactics to get people to join their clubs.

To draw people to their table, the Meditation Club had a pitcher of sweet iced tea and they told students about the benefits of meditation.

Ali Fischer, a junior nursing major, said the club could help people take a step back and take a look at their life.

“People have passed by and said, ‘I didn’t know (this club) was here,’” Fischer said.

Chris Adams, a graduate student studying business administration, said it was a bit harder being inside the Union for this year’s Pantherpalooza.

“How many people are going to come out of their way to be here versus going to the South Quad and having all that foot traffic and all the freshman looking for things,” Adams said. “But it’s the weather, so what can you do?”

Jerome Hampton, a junior business management major, said they planned on meeting and greeting people to get people aware of the Black Student Union and the work they do on campus.

“It’s gonna be a good day for BSU,” Hampton said.

On their table was a sign saying, “It’s BS without U.”

Hampton said people were asking a lot about the community service activities.

In previous years, Hampton said, Pantherpalooza had helped them get a lot of members to their first meeting, with about 30 to 50 people signing up during the festival.

Bethany Hutson, a senior special education major, said for Best Buddies, this year’s Pantherpalooza has been the best it has ever been.

“We’ve been more personal with how we pitch our organization,” Hutson said. “There’s a personal connection, personal stories that draw people in.”

These personal stories were shown through pictures on the table of events and people the group has helped.

The registered student organization’s recruitment efforts do not end when Pantherpalooza does.

The Meditation Club plans on putting posters and striking up conversations with people about stress and how meditation can help.

Meanwhile, the BSU plans on hiring a public relations and marketing chair to help out with publicity, and they have a car wash coming up.

In Best Buddies, members invite people to come from their classes to come to meetings.

Kylie Adams, a junior early childhood education major, was interested in the group Paws for Cause, an organization that serves local animal shelters, rescues and foster-based organizations.

Erin Foley, a junior recreation major and transfer student, said she did not have anything like Pantherpalooza when she was at Joliet Junior College.

Foley was excited about the Harry Potter Club, as she had loved the books from the time they had first come out.

Halie Michalski, a freshman elementary education major, said the fraternities and sororities appealed to her.

“I want to be involved with the Greek Life,” Michalski said. “Just to meet new people, make new friends. They seem really cool and fun.”

Michalski also explored opportunities in her major, and went to the Education Scholars Program booth with Alexis Reddy, a freshman elementary education major.

Michalski and Reddy said the amount of groups were somewhat overwhelming, but there was a lot of information.

Alexis Reddy said she was originally a little nervous about getting involved, but was relieved by Pantherpalooza.

“I was worried about finding something that would fit for me, but I really liked the Education Program and going and learning about Greek Life,” Reddy said. “It made me feel like I could actually fit in.”