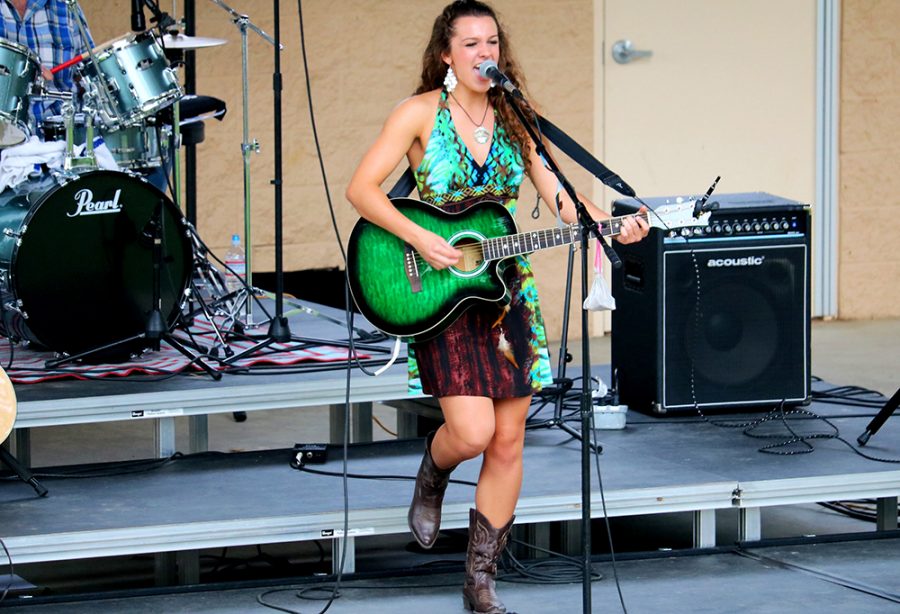 Despite some rain, Charleston residents came out to Kiwanis Park Saturday for the Willstock Music Festival to show support for the Will Rogers Theatre and listen to a variety of musicians.

Earl Halbe, president of the board behind the project, said support for the restoration of the theater has been amazing.

“There are over 800 people [who are] a part of the Facebook group; it’s great,” Halbe said. “A lot of people helped put this together, and it’s really something to watch it unfold.”

However, Earl Halbe said the $100,000 goal that the board set is only an arbitrary figure.

The theater itself is not for sale; it will be put up for auction in October.

Once the theater is purchased, members of the project will own the theater.

Burton and Martin donated half of the proceeds from their performances to the project.

“The Will is such a great place for music,” Burton said. “I love music so much, and that’s why I wanted to donate [to the project].”

Elizabeth Halbe, who helped prepare for the event and is the wife of Earl Halbe, said after the theater was sold to investors in 2010, residents were ready to help and show their support in reopening the theater.

“We wanted to work with them and help them, but nothing happened,” she said.

She said once The Will Rogers Theatre is open again, the plan for it is to host bands and performances from all sorts of musical backgrounds.

The theater would offer entertainment for any type of group, she said, and if Eastern or other local schools did not have enough space for performances, they could use the theater.

“The theater can be used as a way for the community to experience different types of music and used for local theater groups that don’t have a home,” Elizabeth Halbe said.

The theater will not replace the Doudna Fine Arts Center or the high school theater, Earl Halbe said.

“It’s just another option,” he said.

Sharmon McCauley, a Charleston resident, said she grew up in Charleston and cannot imagine moving anywhere else.

McCauley said she attended the festival because she likes a variety of music and remembers the Will from its heyday.

“That was the hangout where all the kids went,” McCauley said. “Now there’s nowhere they can go.”

McCauley, who works in the Charleston Middle School cafeteria, said she hopes the project will be successful and the theater can open again so kids will have a place to go.

Gary Henigman, the secretary for the project’s board, said he supports the project because of his love and passion for historic preservation.

“The Will Rogers is a tremendous aspect [of the city] that everybody appreciates. It revitalizes business, and it changes the atmosphere downtown for the better,” Henigman said. “One way or the other, this theater will be open; we can’t let it not happen.”

Analicia Haynes can be reached at 581-2812 [email protected]