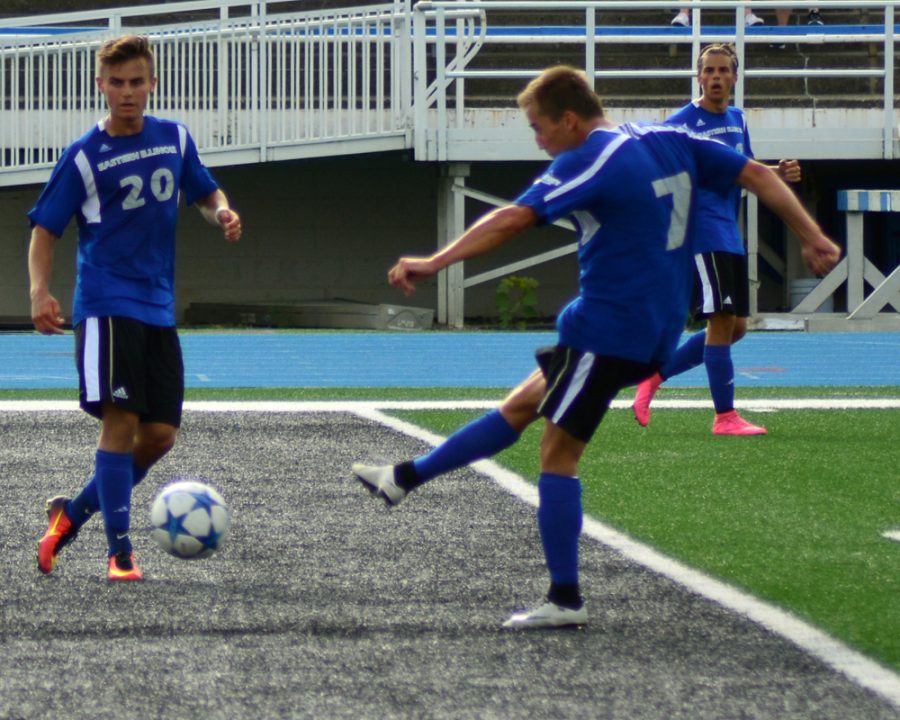 Justin Oliver kicks the ball, which resulted in a goal during a game against University of Illinois-Springfield Saturday in a 1-1 draw.

The men’s soccer team wrapped up its final exhibition game with a 1-1 draw against Illinois-Springfield Saturday afternoon.

The men finished with a record of two wins and one tie in their preseason matches, as they prepare for the regular season this weekend. Junior Justin Oliver continued his scoring streak with the lone goal for the Panthers in the 69th minute. Oliver scored six goals in the three exhibition games.

Redshirt freshman R.J. Hill got the start once again in goal and recorded three saves, while letting up one goal. The first half of the game was scoreless with each team recording two shots each. Illinois-Springfield couldn’t capitalize on a pair of free kicks in the first half, keeping the game scoreless heading into the half.

The Panthers showed a physical style of play throughout the game, which head coach Kiki Lara wants.

“We have to definitely bring an edge to the game to make sure that teams know we are here to compete and win,” he said.

Midway through the second half Oliver put the Panthers on the board as he was in the right position to score off of a loose ball in the box. Senior Davis Wegmann helped create the scoring play when his shot was blocked and sent to a waiting Oliver for an easy goal.

UIS quickly responded with a goal by Alejandro Inostroza in the 73rd minute. Inostroza connected on a shot to the low left corner of the net from the top of the penalty box. Both teams couldn’t connect for the winning goal as they finished in a draw.

Lara acknowledged that there are areas where they need to improve.

“We have areas to improve on that are consistent with the areas last match,” he said. “If there’s a pattern of mistakes, that’s an area we need to focus on so that’s what I would take from this game.”

Junior defenseman Zach Medawattage, who was named a player to watch this year in the Summit League, talked about what the team did well against UIS.

“I think we did a good job playing our possession style soccer to wear them out and open them up,” he said.

Medawattage said the team needs to take advantage of their chances when they get them.

“I think we need to be more clinical in front of goal and finish our chances when we have them,” he said.

The Panthers will begin the regular season this Friday on the road against Northern Kentucky.