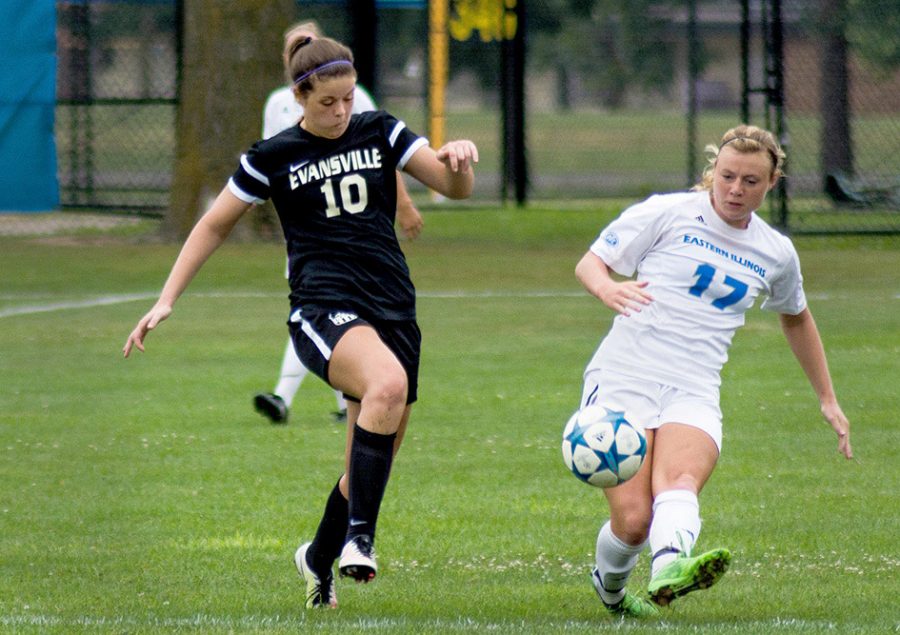 Kathleen Mackinnon, senior forward, advanvces the ball in an exhibition game against Evansville on Sunday. The Panthers tied Evansville, 0-0.

The women’s soccer team is set to begin the 2016 season under the direction of Kiki Lara, the director of soccer for both the men and women programs.

Lara is in his second year at Eastern, as he was the head coach for the men last season. He is now handling the duties of both teams for 2016, which the school announced last spring.

The women went 4-13-2 last season with a 2-7-1 record in conference play under former head coach Jason Cherry. The Panthers do, however, return three of its top five scorers from last season in senior Kathleen MacKinnon, junior Carrie Caplin and junior Ali Carlson.

Sophomore Maddie Lyon looks to be the returning starter in goal after she started in 17 games last season. The Panthers may have some competition in that spot with four goalkeepers on the roster. When they take the field against Bowling Green on Sunday, the women will have 12 new players competing to get on the field.

Lara is excited to see the new faces take the field.

“There are many student athletes that have an opportunity to contribute in a very positive way both new and returning,” he said. “We are excited for the growth of many of our student athletes.” Eastern will have to play its first four games on the road to begin the regular season and return to Lakeside Field for the home opener on September 4 against Indiana State. The women are projected to finish last in the Ohio Valley Conference this year, but Lara is focused on improving each day.

Murray State is the team to beat in the OVC after winning the conference last year and finishing with a record of 16-5. The Racers of Murray State received 18 of 22 first place votes by the league’s head coaches and sports information directors. Southeast Missouri is predicted to finish second followed by Tennessee Tech in third.

Lara wants his new team to show everything they’ve been working on when they take the field for the first game.

“We expect to play our matches with a positive self-belief in the way we do things as a program,” he said. “We want people to see the belief and grit that our soccer team plays with.”