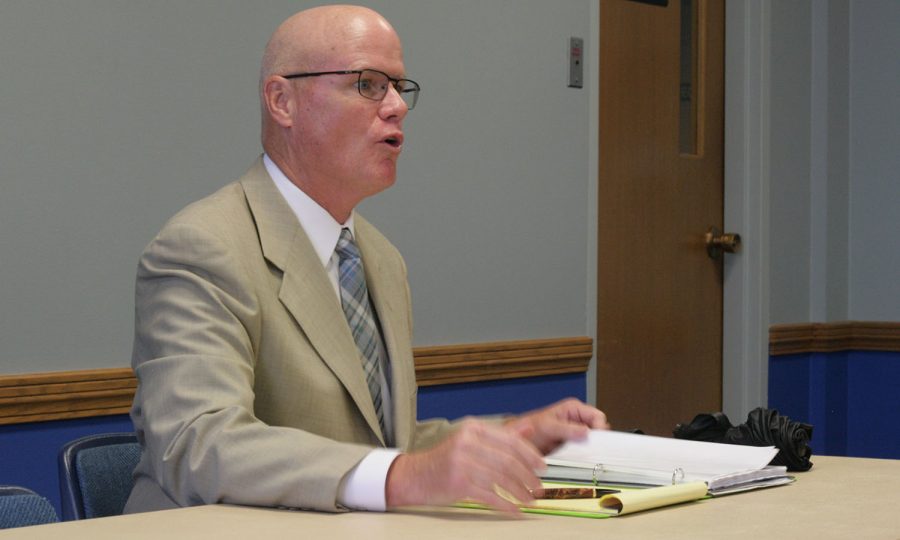 Peter Buckley, a candidate for the University Police Department's chief position, has previous experience working with the FBI.

For Peter Buckley, a moment that sticks out in his career is when a man was kidnapped while he was working at the FBI.

When the man was found and brought back to his family, his children came up to the members of the organizations and told them “Thank you for saving my daddy.”

This, Buckley said, was an ‘Ah-ha’ moment he had in his job.

Buckley described this experience and his plans for training during his interview Tuesday for the police chief position at the University Police Department.

Candidate interviews started on Monday with interim police chief Kent Martin, and will continue Wednesday with Dennis Franks at 2 p.m. in the Shelbyville Room of the Martin Luther King Jr. Union.

Buckley is currently a special investigator who conducts background checks on applicants to the FBI and other U.S Department of Justice employers.

Before this, he  was a supervisory special agent for the FBI, with time spent in the Army and as a high school guidance counselor.

He got his master’s degree in Human Developmental Counseling at the University of Illinois Springfield, and a bachelor’s degree in Law Enforcement Administration from Western Illinois University.

In response to a question about whether he would start over or keep established programs in place, Buckley said he would be “foolish” to change anything immediately.

“I’d like to take a look at what’s going on now,” Buckley said. “I’d like to see what’s working and what’s not working.”

He was intrigued by programs such as ‘Coffee with the Cops,’ and having officers go to residence halls and other areas to teach students how to be safer with their property, alcohol abuse talks, and rape prevention programs.

“I’m kind of a wait and see kind of guy with things like that,” he said.

Though he has not worked in a college setting before, Buckley has worked with students as a high school guidance counselor.

When asked how he would combat negative stereotypes students may have about police, he said he would make sure they remembered what they were trained to do.

“It’s a case of muscle memory,” he said. “ You’re always polite, when making a traffic stop (say) sir, ma’am, my name is Officer Buckley, this is why I pulled you over.”

He added that is important to stay calm, and train officers on what they should do at traffic stops, with active shooters, and the media.

“You can’t be concerned there’s gonna be a sniper in the window,” Buckley said. “You have to do the smart things you’re trained to do.”

To make connections with the city, Buckley said he would meet with city officials such as the mayor. In the community, he said he wants to touch base with sororities and fraternities, faculty, residence halls, academic departments and others to see what they need.

JaLisa Smith, a graduate assistant for the UPD, was interested in hearing about Buckley’s ideas for community policing.

She was present at both Martin’s and Buckley’s interview.

“I am a student who is a minority and I am a leader on campus, I’m very involved, so in my opinion there could be more done in the community policing side,” Smith said. “Some groups see the police, some don’t.”

Working internally, Smith sees that while there are enough police officers to cover the campus safety, without a full staff, some extra-curricular groups fell to the wayside.

“Part of my job is to figure out where they can fit in,” she said.

Smith likes that she knows Martin already from working at the UPD, and they have good communication already.

She likes that Buckley is involved in more than one career, and said his experience as a high school counselor could help him relate to students.

“He may have many sources to pull ideas from,” she said.