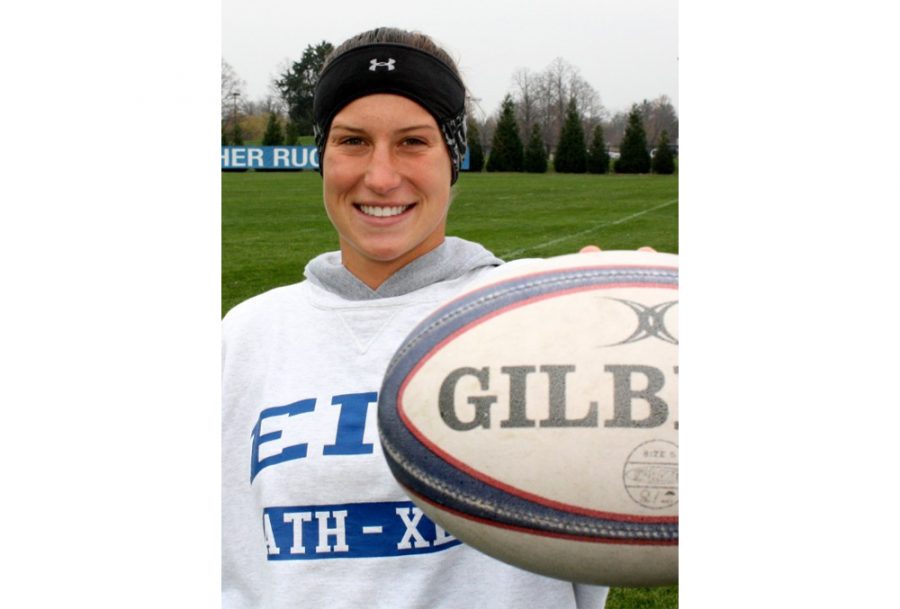 Eastern alumna Lauren Doyle is headed to Rio de Janeiro after being named to the 2016 U.S. Olympic Women's Rugby team.

The USA named its 2016 U.S. Olympic Women’s Rugby team Monday, and a former Eastern player earned a spot on the roster. Lauren Doyle will head to Rio de Janeiro, Brazil with 11 other women to compete for a medal for the first time in 92 years.

Doyle joined the Panthers’ rugby squad in 2009 as a freshman and will now be able to showcase her talents on the biggest athletic stage in the world.

“As an athlete, the Olympics is the biggest stage you can compete on,” Doyle said. “So when I found out I made the team, I felt honored, excited and a little relieved that I actually did it.”

In the coming weeks, Doyle will be able to represent the United States in front of the rest of the world, and represent Eastern as well.

Doyle’s rugby career began at Eastern in 2009, but after her first year is when she started to eye the Rugby 7’s for the 2016 Olympics.

“EIU is where my whole rugby journey began,” Doyle said. “In 2010, after my first year of rugby, my coach, Frank Graziano, sat me down and told me Rugby 7’s was going to be in the Olympics in 2016, and it would be my goal to make the USA women’s residency program before I graduated in 2013. I have been planning this adventure for a while, and I can’t believe it’s finally here.”

While she attended Eastern, Doyle was also a member of the women’s track team, but rugby was ultimately the sport for her.

There will be 12 teams competing in the first women’s rugby competition in the Olympics.

“It’s an amazing feeling to be a part of the first women’s US Women’s Olympic Rugby team,” Doyle said. “It is really hard to grasp the concept of how powerful that position is. We, the team, are really pioneering rugby in the United States, and I hope we inspire a whole generation of kids to go out and try rugby.”

Eastern Athletic Director Tom Michael was not at Eastern while Doyle played for the Panther rugby team but still sees what she has done as a huge accomplishment, he said.

“Eastern Illinois has been fortunate throughout the years to have been represented in both the Summer and Winter Olympic games,” Michael said. “Lauren representing Team USA in the Rio Summer Games is the next chapter in that successful history.”

Although Doyle and the rest of Team USA will head to Rio in just over a week, the feeling of making the team will not set in for Doyle until she is actually there staring at the field, she said.

Team USA has known their pool for some time now, and they have spent time watching film and scouting the teams. Fiji, Columbia and Australia are in the same pool as the U.S.

For Eastern, Michael hopes Doyle’s accomplishment will give some exposure to the school.

“I think that for any university, to have some one represent them at the Olympic games, it provides great exposure not only for themselves, but also for that university,” Michael said. “I would hope that the publicity generated by Lauren making the Olympic team is a positive for not only the Eastern Illinois Athletic Department, but also the university as a whole.”

The Eastern Athletic Department has kept track of Doyle’s success over the year, and it will continue to do so as she goes on her Olympic journey.

Doyle and the rest of the team will head to Rio July 30 after playing a scrimmage against New Zealand in Florida on July 26. The games will begin Aug. 6, and go through Aug. 11.

“It’s going to be an amazing experience that I am definitely looking forward to,” she said.

Doyle added she will try to tweet as much as she can throughout the tournament to give updates on her journey. She can be followed at @Ldoyle2009.