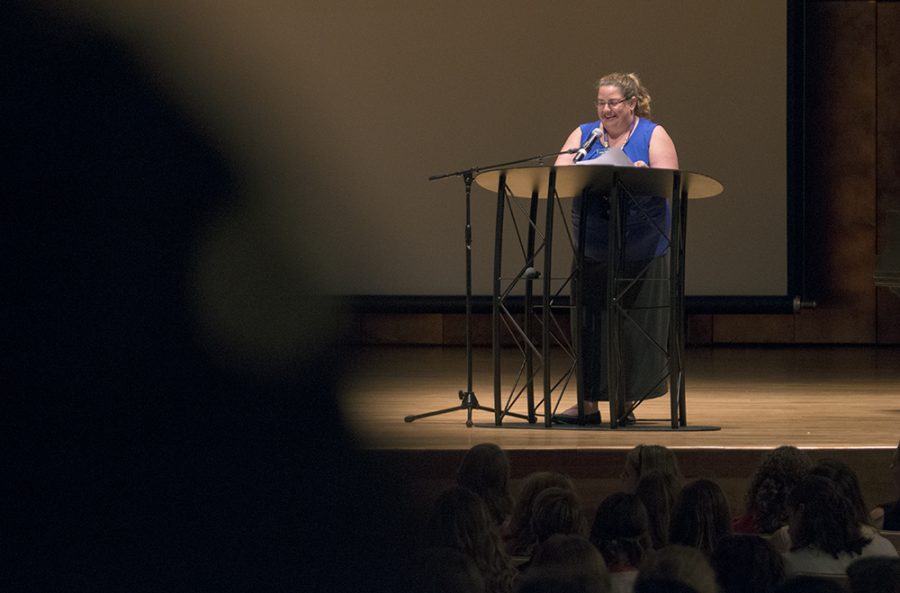 Angie Mulligan, an Illini Girls State elections office staff member, reads the results of the recently held primary Wednesday in Dvorak Hall of the Doudna Fine Arts Center. Mulligan is also a teacher at Tinley Park’s Central Middle School, the school that donated the use of its iPads for electronic voting at Girls State.

Soon-to-be high school senior girls quietly chattered amongst each other as they anticipated the primary election results during one of the American Legion Auxiliary Illini Girls State sessions in the Dvorak Concert Hall of the Doudna Fine Arts Center Wednesday.

After almost a year-long recess, Girls State resumed this week at Eastern for the 32nd of its 76 years of existence.

The 424 girl partaking this week have the opportunity to run for office, campaign and even electronically vote through iPads, a feature added in the last couple years, Kathy Cisna, state president of the American Legion Auxiliary, said.

“We run our [elections] just like ones in the “real world.” We have two political parties,” Sarah Wyckoff, Illini Girls State director said. “[The girls] had their primary election, so they selected their “Fed” candidate and their “Nat” candidate, and so now these two will face off in the general election.”

Other political activities in which campers participate include meetings, where various camp staff members present information such as the aforementioned election results.

“We have assemblies, or what we call sessions, at least two or three times a day, at those sessions we have various presentations from our different departments,” Wyckoff said. “We also showcase programs of the American Legion Auxiliary, and we also have various speakers.”

Some of the speakers to whom Wyckoff was referring included Illinois Treasurer Mike Frerichs, who spoke at an assembly Tuesday, a female state trooper and a female army colonel as well, Cisna said.

A photojournalist was scheduled to speak during one of Wednesday’s sessions but cancelled for unknown reasons, Wyckoff said.

“I’d always been interested [in politics], but I mean nobody ever wanted to hear my opinion on things,” Doerr said. “Then I got here, and all of a sudden there was 400 other girls who decided that my opinion was apparently worthwhile.”

Although the week-long program is centered on governmental procedures, Wyckoff explained that the girls participate in other summer camp-like activities.

“We sing a lot, we have recreation, we hold a competition,” Wyckoff said. “We do a talent show, where girls can showcase their different talents: singing, piano solos, dancing, dramatic interpretations.”

The competition Wyckoff referenced is the “Fun-o-lympics.” During this activity, the “cities,” also known as units at other summer camps, compete against each other in track and field-like events.

This year, “Illini Girls State,” the name of the imitation state in which all of the girls live, consists of four counties, which contain four cities each, Cisna said.

“They’re just a little piece of paper,” Cisna said about the tray favors. “Something to bring a smile to their face and brighten their day.”

While it is easy to see how such service projects could contribute to a camper’s personal growth, Doerr said some of the less obvious ways a participant can develop involves networking.

“You make new friends, you learn how to make your voice heard in such a large group, something a lot of people don’t like to do,” Doerr said. “There’s just a lot of mutual support within the cities, and you can make connections for further professional growth.”