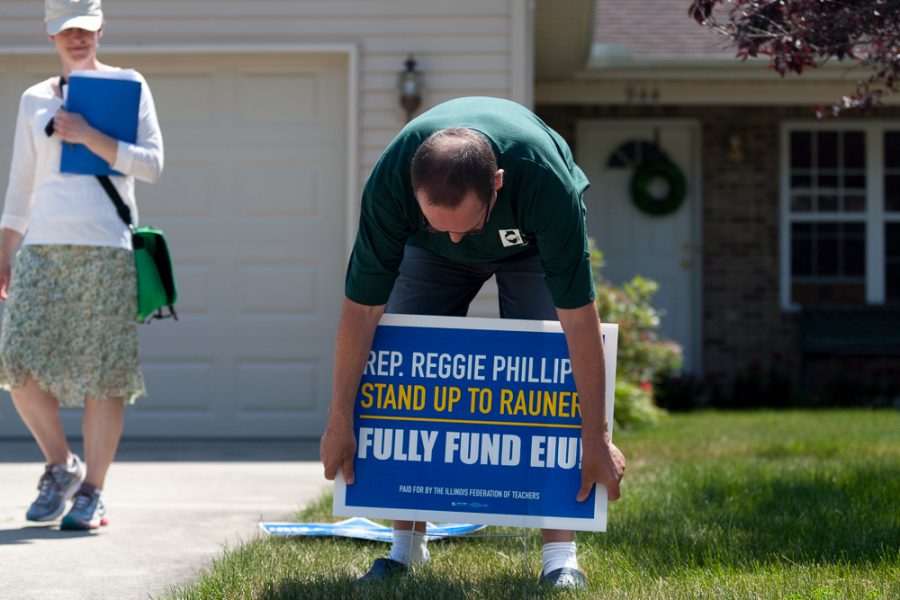 Stefan Eckert, a music professor, places a sign in a yard on Briarwood Court in Charleston on Saturday. Eckert was accompanied by Sace Elder, a women's studies professor and member of the EIU-UPI mobilization committee.

Eastern’s chapter of the University Professionals of Illinois hosted a second canvassing event on Saturday, walking up and down Charleston streets, reminding people to keep putting pressure on the area’s elected officials.

Eleven people participated in the event that saw multiple city neighborhoods canvassed, which  Sace Elder, a member of the EIU-UPI mobilization committee and a history professor, said was a really high ask.

Elder, along with Stefan Eckert, a music professor, both went canvassing for the first time, reaching homeowners on Westgate Drive and Briarwood Court.

The groups operated on pre-made lists with names of residents attached to addresses so the canvassers could greet them by name.

“The most uncomfortable thing to do is just to walk up to some strangers house and start talking about something that could be potentially conflict-laden,” Elder said. “Given that so many of our union members are gone over the summer, we had 11 people show up, I think that’s good.”

Elder said the EIU-UPI would be working to raise as much awareness as possible by having a presence at area events this summer.