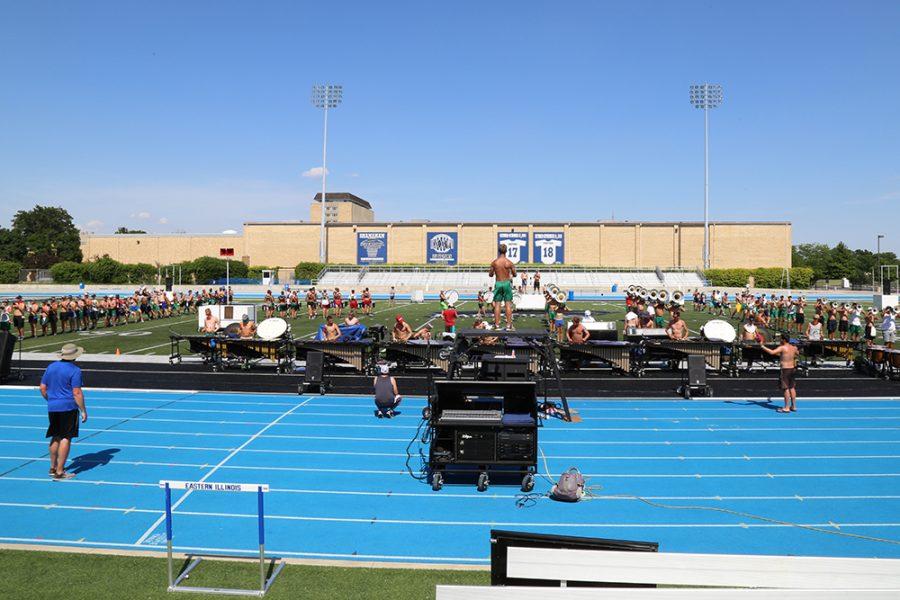 Members of The Cavaliers Drum and Bugle Corp practice outside at O'Brien Field on Friday. Temperatures reached upwards of 90 degrees on Friday.

After arriving on Monday, The Cavaliers Drum and Bugle Corps will be performing for the community at 8 p.m. at O’Brien Field.

The Cavaliers are sponsored by the Village of Rosemont and part of Drum Corps International, which is a circuit of 20 or more drum corps.

They are a youth organization that focuses strictly on music, more specifically on the percussion, brass instruments and guard.

This year’s performance is on propaganda, focusing more on the advertisements and the political and social side of it.

It is made up of 150 people between the ages of 18-22 and they are from around the country.

“We have a couple of kids from Japan and even the Netherlands,” said Kyle Walker, production lead and head of the media for the Cavaliers. “Most of our students are from the mid-west Texas area.”

Most start out in the program around the age of 17 and eventually when they are too old to compete they try to help out in other ways.

Austin Baker, head drum major for two years, started out in the program when he was 17-years-old. Before becoming a drum major, Baker was a trumpet player for three years.

“I first found out about the corps through YouTube videos. Then my assistant band director, who marched at the Cavaliers, told me stories of when he marched,” Baker said. “What I value most is being able to form a close bond with 149 other guys throughout the season. Every day we learn to push ourselves and become better at what we do and in turn learn to be better people.”

Their program starts at the end of May and ends in August but their auditions begin as early as November. Their day to day schedule consists of rehearsal for about eight hours with a breaks in between.

“It’s a combination of athleticism and music,” Walker said. “Some like to call it the marching arts.”

After their performance on Saturday they will be headed straight to Indianapolis for another show. They perform for about 1000-30000 people at their shows and travel to a different state every couple of days and perform at a different city every night.

They are the third most winning drum corps of all time. They have won seven titles since competing and have been around since 1948.