Summer classes for children to begin 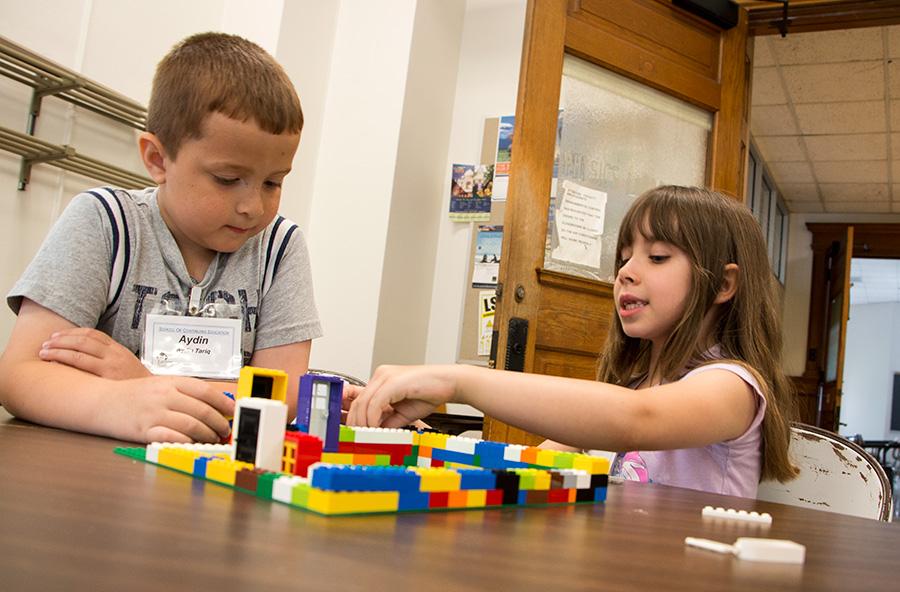 Aydin Tariq and Cheyenne McFarland play with LEGOs during the free playtime at the Beginning Engineering LEGO Camp on June 24, 2014 in Room 2231 of Old Main. The beginner’s camp allows children ages six to eight to design and build LEGO creations such as cars, catapults and wheelbarrows.

The Tarble Arts Center and School of Continuing Education will be holding classes and camps involving painting, sculpting, engineering and horseback riding for children of all ages starting June 13.

While the original registration deadline for child art classes (held June 13-30) at the Tarble Arts Center was June 8, Kit Morice, Tarble Art Center curator of education, said she will accept late registers until Friday, June 10 because none of the classes have reached the maximum capacity of 12 students.

The art classes at Tarble are as follows:

“Summer Art Adventure,” for children ages four to six. This hour-long class, which starts on June 14 and continues for every Tuesday and Thursday through June 30, will introduce art elements and reinforce the proper use of art tools such as scissors and paint brushes according to the arts center’s webpage.

“Summer Art Explorations,” for children ages seven to nine. This class, which is an hour and 15 minutes, will involve the creation of prints and collages according to the webpage. Students will additionally learn more about art elements with each project. The class also starts on June 14 and is semi-weekly until June 30.

“Make it in Clay!” for children ages 10 to 14. Students will work with clay to learn hand-building and finishing techniques as well as surface decoration methods during this hour and a half long class according to the webpage. Unlike the other two, this class starts on June 13 and continues every Monday and Wednesday until June 29.

For more information about these summer art classes, visit www.eiu.edu/tarble/classes.php.

The School of Continuing Education will also be hosting its “Summer Escape” program for children from June 13 to July 22 according its webpage on Eastern’s website. This includes several four-day camps in which children will learn how to build various objects out of LEGOs.

While the camp for beginners involves more simple projects like building catapults and cars with LEGOs, the “Introduction to LEGO Mindstorms Robotics” camp will include building and programing a LEGO robot said Peggy Brown, one of the event coordinators.

The cost of these classes is 99 dollars and includes the camp itself, sustenance and an individual LEGO kit for each child to take home, Brown said.

Registration for these two summer camps, and others offered by the School of Continuing Education, is available at http://www.eiu.edu/adulted/kids.php.

Because of the lack of enrollment Brown said the School of Continuing Education will not be holding the horseback riding workshops scheduled for this Saturday.

However, two horseback riding classes for children ages six to 11 will be offered July 16 according to the School of Continuing Education’s webpage. Each onetime, two hour class will take place at Paradise Equestrian Therapy Center.

The objective of the class, as stated on the aforementioned webpage, is to teach horseback riding basics that are important for the safety of the rider, the people around the rider and the horse.