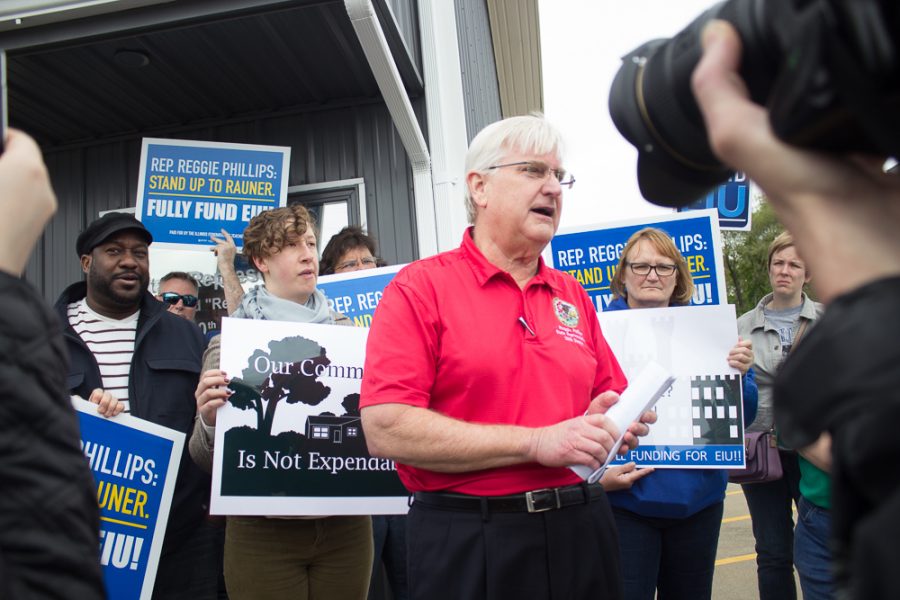 Members of Eastern's chapter of the University Professionals of Illinois stand outside the office of Rep. Reggie Phillips on May 16.

About 50 people assembled at Morton Park, marched down Lincoln Avenue and surrounded Rep. Reggie Phillips at his legislative office Monday.

These demonstrators goal was to discuss the Illinois budget crisis with Phillips the day before the General Assembly resumes business.

Crowd members included Eastern faculty, University Professionals of Illinois from Chicago State and other members of the community.

Sace Elder, a member of the EIU-UPI mobilization committee and a history professor at Eastern, said she was pleased with the turnout.

“Given it is the second week after the semester is over, the fact that so many were willing to come out and walk nearly a mile to demonstrate their love for Charleston and EIU, and to express their frustration with the 70% funding cut, speaks volumes about our community’s commitment,” she said.

The main focus of this mob was to discuss with Phillips their concerns regarding Eastern’s and other school’s lack of “full funding.”

While Eastern recently received $12.5 million, this amount is only enough to get through the summer semester.

When they arrived at the representative’s office, crowd members discussed and argued with Phillips about ways to solve the budget crisis.

He said in the future he will not vote for a bill regarding appropriations without President Glassman’s approval beforehand.

The state representative also talked with the demonstrators about the smaller 2 or 3 billion dollar bills that he did not vote in favor of because he said “it’s all about politics.”

However, he said if legislators were to create a bill that would fund higher education 100 percent, he would vote in favor of it with the stipulation that a budget was created a few months prior.

He also said he was for a “tax increase” but not a progressive tax. When asked why he was against progressive tax, he responded that it is not good for businesses.

He when pressed for more answers regarding tax systems, Phillips said that he would like to focus on “bills that will pass.”

Phillips also talked about the 40 million dollar bill that was shut down.

He said he would co-fund a bill with State Representative Rita Mayfield, but Speaker of the House Michael Madigan did not want him to co-fund it.

He further said the $40 million bill was going to fund the five universities in the worst financial state and no junior colleges.

Phillips also said he has put together 2 to 3 bills but they have gotten tossed aside.

Phillips attributed the lack of progress in higher education funding to political affiliations.

He additionally explained his contributions to the ongoing crisis.

“I’m not involved in any of the budget talks. It’s just the leadership that’s involved, but who’s the leaders? I’m saying let’s bring it to the floor” Phillips said. “Let’s all talk about it. Let’s negotiate.”

After the march, participants returned to the park to begin canvassing homes to drum up support.

Destiny Bell and Jason Howell contributed to this article