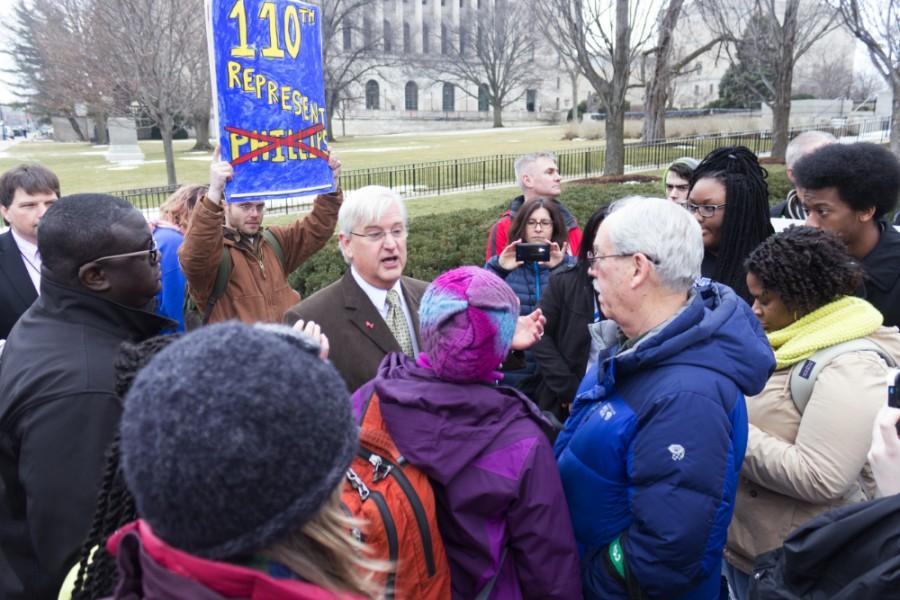 Rep. Reggie Phillips, R-Charleston, talks with constituents as budget concerns force students to descend on the capitol steps of the Illinois State house to rally for higher education funding on Feb. 17 in Springfield.

Members of Eastern’s chapter of the University Professionals of Illinois are set to lead a demonstration culminating in front of the office of Rep. Reggie Phillips on Monday.

The UPI event, starting at noon and beginning at Morton Park, has been planned for a couple of weeks, according to Sace Elder, a member of the EIU-UPI mobilization committee and a history professor at Eastern.

Originally planned to be held entirely in front of Phillips’ office, the starting place at the park was added to accommodate the numbers who wished to demonstrate.

“A few people from CSU and NEIU and K-12 institutions are coming down to stand with us, just as students and staff from EIU went to Chicago on April 1 for the Day of Action,” she said.

Elder said that this event is in response to the recent funding bill.

“We are glad the legislature is attending to the crisis, but we also find it unacceptable that our institution has experienced a 70 percent cut in funding,” she said. “Our event is to remind legislators that we are watching.”

Between 35-40 people are currently signed up to participate.

Willing attendees after the event who can canvass are asked, but not obligated to, to raise community awareness and have a petition signed.

“Representative Phillips has expressed his support for full funding for EIU, for a full state budget, and for finding new revenue sources to support that budget,” she said. “It is important that we hold him to that promise as he returns to Springfield.”