The Daily Eastern News • May 1, 2016 • https://www.dailyeasternnews.com/2016/05/01/community-comes-together-to-support-and-fundraise-through-fundfest/

Community comes together to support and fundraise through FUNdFest 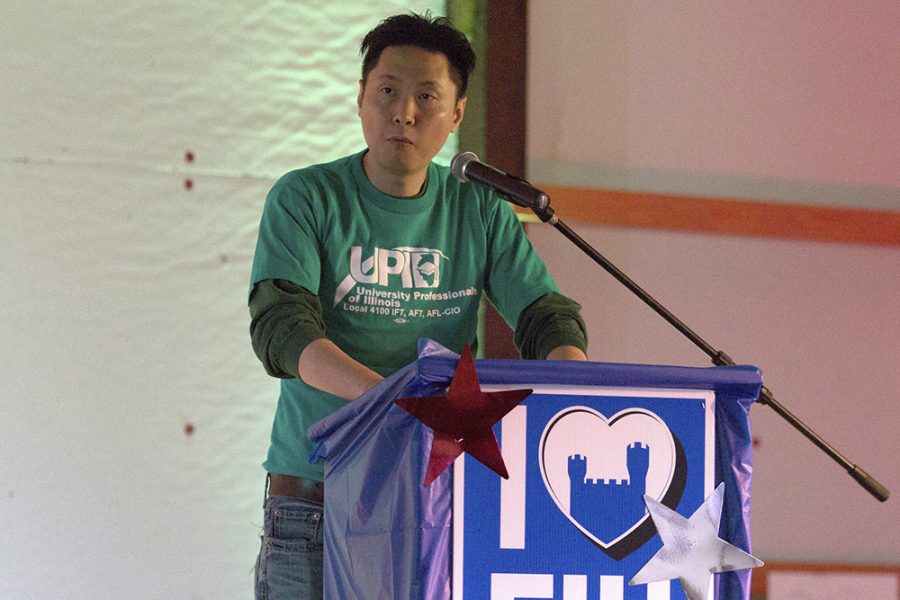 Billy Hung, media coordinator for Eastern's chapter of the University Professionals of Illinois, speaks to the crowd at FundFest on Saturday at the Coles County Fairgrounds.

Members of the Eastern and Charleston community came together to support and fundraise for laid-off Eastern employees at Saturday’s FUNdFest.

Even though it was raining, many people came out to see bands play their music. Vendors still set up their stands to sell kettle corn, French fries and other festival fare and art was shown in an exposition. Children could be seen jumping in bounce houses and playing carnival games.

Donations were taken around the event and a table for displaced workers was set up, where they could receive a voucher for free food, free games, and raffle tickets so they could read prizes.

There was also applications where displaced workers could put down their information so the group Support EIU Employees could reach out to them in the future to help them find a job, community outreach program, or paying their bills.

Guy Brewster, a volunteer at the displaced workers table, said he had been telling people to send laid off employees his way so they could be helped.

“I think (this event) serves so many different purposes,” Brewster said. “It serves as a reminder that we are all a community as whole, to help each other out and uplift each other.”

Andy Eggers, president of Support EIU Employees, said no words could describe how he felt about the turnout of the event.

“It’s life-changing,” Eggers said. “There’s been multiple times when it looked like it was going to fold, but here we are today. It’s full of people, people are buying, hopefully after today we have a great fund for these people.”

He was especially taken aback by the amount of volunteers and people who came out despite the rain.

Plumbers and other tradesman came out to help with the rain and many businesses helped out financially.

“We all pitched in and changed the setup and tried to make this event as good as it can be,” Eggers said.

Eggers said the community was tight-knit, loving and caring.

“When faced with a giant threat, we’ll come together, just like (we) always have, and we will all stand up and try to take care of each other,” Eggers said.

Now that FUNdFest is over, Support EIU Employees will finish putting together the formula to release the relief fund. They have the applications, which will go to a board that will be created to oversee the relief fund.

The funds will go out after May 17, Eggers said.

The group is now looking at the possibilities of 5ks and more raffles as the summer progresses.

Joe McLean, former office manager for the Women’s Resource Center and the foreign languages department, was touched by the show of support from others at the event.

“We are still a family, they still have our backs,” McLean said. “We’ve all been going through this for the last ten months.”

When he was first laid off, McLean said he felt alone and would never imagine something like FUNdFest happening.

A lot of the work McLean did for FUNdFest was done staring out his back window at Lawson Hall, as part of his property is Eastern’s property.

“I have been as connected to EIU as ever,” McLean said. “Since I’ve been laid off I’ve been (working) from the time I get up until the time I go to bed to get this done.”

The event had many people speak from the university, including Billy Hung, media coordinator for the University Professionals of Illinois, Kim Turner, the former office administrator for the communication studies department, and William Weber, the former vice president of business affairs.

Turner spoke about the transitions and challenges she has had since being laid off in March.

“It seems as though we have been stuck on an endless emotional roller coaster,” Turner said.

Turner said when people do not lose their jobs when they are laid off- they also lose a part of their identity.

“They lose their sense of purpose. It’s not just a job. It’s part of who we are,” Turner said. “Not a day goes by when I’m not wondering what’s going on on campus, or think about the co-workers or students I used to see regularly. Part of my heart is still there, and it always will be.”

Turner said workers are essential, and Eastern is not the same without them.

“Those of us who lost their jobs are not just numbers, or budget line items,” Turner said. “We’re real people with real lives who have been turned upside down.”

However, she said when reflecting on the past several months, she knew the community is strong.

“If there is one positive thing we can take from all of this, it is that it brought us all together,” Turner said. “I have never felt more connected to this community than I have during this crisis.”

He said to look past barriers such as skin color, what language others speak, religion, what country they come from and sexual orientations or gender presentations, to recognize they are all just trying to earn a living and support their families.

“If we can do that, we can push back on the idiocies of Springfield,” Hung said. “We need to come together. Our state is in trouble, we are in trouble because many politicians refuse to be accountable for their actions.”

Phillips said this is not the end, and the only way to get things is accomplished is by respect and working together.

“The fact that we have 177 people who have been laid off from Eastern Illinois University is a travesty,” Mendoza said.

She talked about how devastating it was when her mother was laid off from her job.

Duckworth said it is wonderful the community is getting together to help people who are suffering.

“I want to be very clear about this-you are suffering needlessly,” Duckworth said. “We need our leaders in Springfield to compromise on our budget and fund our schools.”