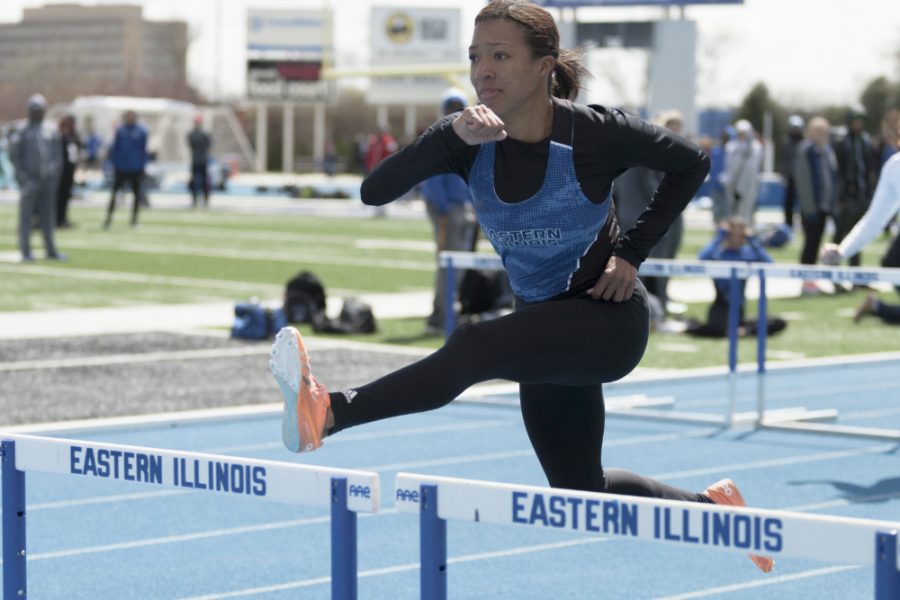 Senior Amina Jackson placed third in the women's 400 meter hurdles, second in the 4x400 meter relay, 14th in the 400 meter dash, and 16th in the 100 meter hurdles prelims during the EIU Big Blue Classic on April 2 at O'Brien Field.

The track and field teams will compete in the Drake Relays this Thursday through Saturday in Des Moines, Iowa.

The teams will send 13 athletes along with five relay teams to compete in the three-day meet. The events will begin for Eastern on Thursday with the men and women’s 800-meter run. Senior Mark Pedziwiatr will run in the event for the men and senior Kristen Paris will compete for the women.

There are two athletes participating in multiple events this weekend for the Panthers. Senior Eric Gordon will compete in the javelin Friday morning for the men and will return in the afternoon for the pole vault, which begins at 12:30 p.m. For the women, junior Bryn Buckwalter will compete in the women’s discus on Friday at 1 p.m. She will be back in action for the shot put Saturday afternoon at 12:30 p.m.

Eastern will have a pair of men and women competing in the steeplechase. The women’s steeplechase will begin Saturday morning at 10:40 a.m. with the junior sister duo of Rachel Garippo and Ruth Garippo going for the Panthers. Junior Riley McInerney and red-shirt senior Joe Calio will be competing for the men after the completion of the women’s event.

For the field events, the women will have sophomore Haleigh Knapp competing and the men will have junior Kendall Williams. Knapp will look to continue her success in the women’s high jump after increasing her school record last weekend in the events. That will begin on Friday at 1 p.m. Williams will be competing in the men’s long jump on Friday at noon.

Not everyone is accepted into the Drake Relays and only 25 athletes will be there for the Panthers. Jackson, who is getting her first and last chance to compete at the relays as a senior, is not approaching the meet any differently.

Jackson also said she is excited, but really nervous to compete at the Drake Relays. Also noting that she is glad to have the chance to compete this week in her last year of track.

Junior Jonathon Boey will be competing for the men in the 100-meter dash on Friday at 12:53 p.m. The two men’s relay teams will compete Friday. The 4×100-meter relay team will be in the morning at 10:58 a.m. The relay team will consist of Boey, freshman Ja’Marcus Townsend, junior Jamal Robinson and senior Christian Ilunga-Matthiesen.

Director of track and field Tom Akers said the Drake Relays give the teams a chance to compete against the best teams in the nation. What is different about this meet is the amount of relays, giving them the chance to run the 4×800-meter relay and the distance medley.