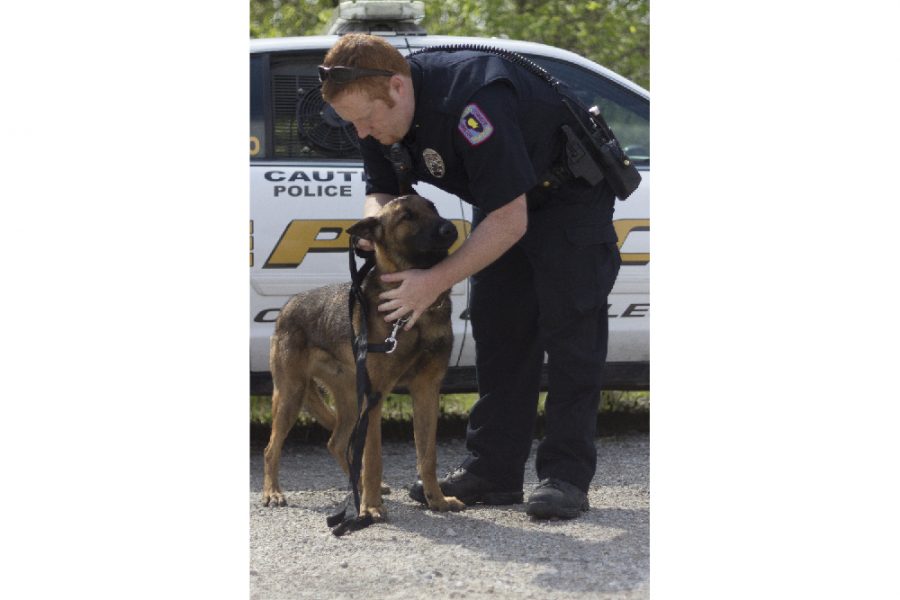 For Charleston K-9 officer Heath Thornton, Saturday morning training includes concealing drugs for a “dope hide” exercise, suiting a fellow officer up to get bitten, and enjoying essential bonding time with his dog.

For Ivan, his 8-year-old Belgian Malinois patrol dog, sniffing out substances like methamphetamines, cocaine, heroine, ecstasy or marijuana is like playing a game.

“When he smells meth, ‘Hey, that’s my ball!’” Thornton said.

Ivan got his turn to exercise his skills Saturday while Vito, the Charleston Police Department’s newest dog, took a break from the extensive training he has been doing in Evansville for the past few weeks.

Ivan’s nose leads him through the Charleston Police and Fire Training Facility to a wooden crate, which he scratches dutifully with both paws to alert Thornton to the smell of methamphetamine.

Thornton responds to Ivan’s success with praise and allows him to chew a toy, which he said is everything when it comes to building loyalty.

“I talk to him like he’s one of my children,” Thornton said. “When they do something great, you get all excited with the high-pitched voice, roll on the ground with them, tease them, play with them. They absolutely love that. It makes them want to work more and work harder.”

Ivan is an aggressive-alert dog, so he scratches to alert his officer.

Vito, who has been training with Thornton to pair up with Charleston K-9 officer Chris Darimont in June, is a passive-alert dog, so he will sit to alert his officer.

Both have their advantages, Thornton said, but more dogs are now being trained as passive-alert to avoid scratching cars.

Vito is more of a “social butterfly” than Ivan, but the goal is to eventually have them working side-by-side, Thornton said. Ivan will be able to work until he can no longer be productive, likely for another year, and then retire and continue living with Thornton’s family.

Unlike Ivan, who was donated from a local kennel, Vito was shipped from a breeder in Slovakia. The Belgian Malinois breed is similar to the German Shepherd, but these dogs are slightly smaller and more energetic. Thornton described both Ivan and Vito to be a sable color, mostly black fur peppered with dark brown.

The cost of the new dog and training class amounts to $15,000, not including travel expenses, of which the department has raised about $13,000 already through donations.

While Vito waits in the patrol car Saturday, Ivan gets to stretch his muscles in the fenced-in grass area behind the training facility as Thornton demonstrates basic heeling, walking and distance commands.

“(Obedience is) the basis of everything that you do; you’ve got to be able to control your dog,” Thornton said. “That being said, they are dogs, and it’s nothing for a rabbit or something to run off and a dog to be a dog and want to chase after it.”

For the evidence search, Ivan sniffs around the yard until he finds scattered items with traces of human scent left on them.

This time, Ivan finds matches, a set of keys and pieces of leather, but Thornton has trained him to find anything from shotgun shells to cellphones.

“Believe it or not, criminals are stupid for the most part, and they will drop or leave something behind almost always,” Thornton said.

Using dogs to locate evidence can avoid needing up to six officers to conduct a methodical search pattern over a large area, he said.

Despite the difficulties presented by the wind carrying scents in different directions, Ivan continues to search for the items until he is successful.

“This here is what we call a hunt drive because he’s hunting and he won’t give up,” Thornton said. “He’ll die before he gives up. That’s the beauty of the dog.”

As Thornton’s first dual-purpose dog, Ivan is able to search for narcotics and do criminal apprehensions, though he said Ivan has never had to bite anyone.

In a demonstration, Darimont pretended to be a criminal who ran and would not surrender upon Thornton’s request. Ivan followed suit and held his bite upon the training sleeve until Thornton commanded him to release.

Though Vito has been training daily to prepare for trials to attain United States Police Canine Association certifications, the department typically only is able to train one eight-hour day per month, so the K-9 officers also fill in their downtime with training exercises.

“Because we’re in a smaller agency, we don’t have the perk of being able to train just K-9 and work just K-9,” Thornton said. “We have to work the street and everyday calls like everybody else.”

However, Thornton does not mind beginning his day at 6:15 a.m. laying out a track across the street for Ivan to follow, or packing in training time to prepare Vito to work with Darimont.

He said he is “living the dog life” and loving every second of it.

“A lot of people think, ‘Oh yeah, that’s going to be fun to let your dog bite someone,’” Thornton said. “Not at all. The fun part is the play, being here with the ball and watching the dog love it. It pulls the passion out of me.”