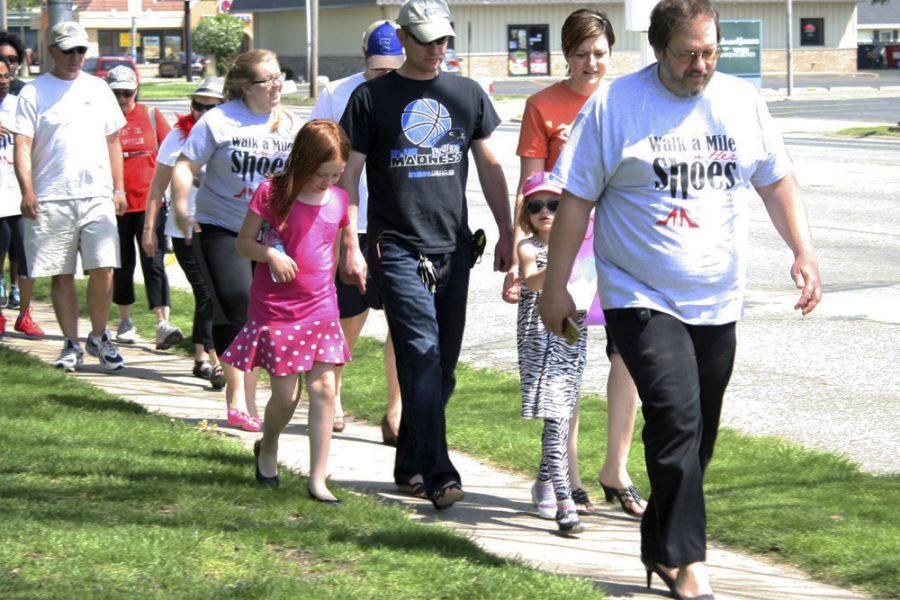 Participants of the “Walk a Mile in Her Shoes” event march down Lincoln Avenue to raise awareness of sexual assualt and sexual violence Sunday afternoon.

Pavement with chalked arrows marked the path for members of the community in the “Walk a Mile in Her Shoes” awareness demonstration.

During the third annual walk-a-thon, participants were seen holding signs that read sayings like “Only yes, means yes,” and “No excuse for abuse.” Drivers going past Morton Park honked in support of the walk.

The Sexual Assault Counseling and Information Service invited all ages and genders to kick on their heels, gyms shoes and flip-flops to walk two laps around the park.

The women of the National Association of Colored Women’s Club led the way at the start of the walk with a banner. Men were seen wearing high heels strutting down scale of Morton Park.

Sheldon Aaron, a graduate student, works with SACIS as a volunteer and was among the men walking the mile in heels. Aaron said the walk helps to get the agency’s name out so survivors can see support.

“Males need to be more active in agencies like SACIS, just because historically, males weren’t as involved,” Aaron said. “SACIS brings to this community a sense of safety and a sense of security.”

SACIS has been working without a budget and had to reduce their operating expenses.

Erin Walters, the executive director of SACIS, rounded the group in an ending speech explaining the importance of the walk. She said the walk makes talking about sexual violence visible, in that people passing by see the signs and the many supporters.

Walters said the signs broke the silence and provided a representation of those who stand by survivors in their fight. She said over time the dialogue has shifted from prevention efforts being surrounded around the survivor to it putting responsibility on the offender.

Questions like “Why were you there?” and “Why did you put yourself in that situation?” have been used in the past while talking to survivors Walter said. She said society has to change the language.

Donna Hudson, an adult counselor at SACIS, said sexual violence is a topic that people reluctant to talk about, and the walk gives a safe space to welcome the conversation.

“It stays in the shadows and this event makes it possible for people to actually speak about it,” Hudson said. “When we talk about something, we’re more likely to be able to ready to deal with it.”

Hudson said today’s society is still pent up on the value of men over women. She said seeing different genders and ages walking in solidarity show people to stand with one another.

“It makes it OK for others to stand up for others,” Hudson said. “When you see one guy up there in high heels, soon you’ll see 10 guys with high heels.”

The women of the National Association of Colored Women’s Club stopped by before the walk to put chalk on the sideway which helped to guide the walkers around the park.

Janae Houser, a junior pre-nursing major, is a member of the National Association of Colored Women’s Club and said the walk brought empowerment and positivity. She said the support from men showed them putting pride aside for a good cause.

Ma’Chana Ambrose, a senior kinesiology and sports studies major, said is a member of the National Association of Colored Women’s Club and said the male support show that support can come from anyone.

“It shows that there’s no gap, it means that we’re all on one page,” Ambrose said. “They support women, and what we stand for.”

Hudson said proceeds that came from donations and registration goes back to SACIS and their services.