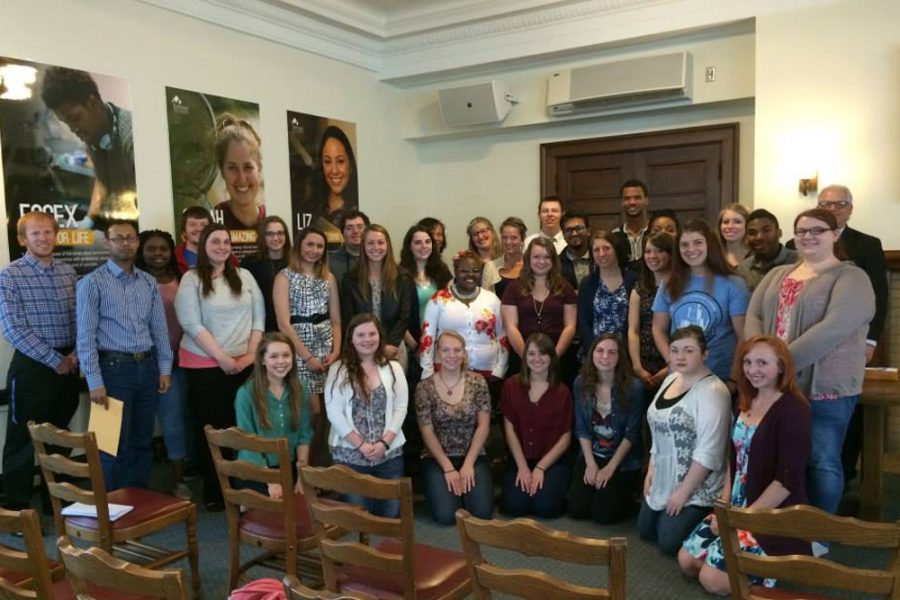 A group of students pose for a photo at the 2015 English Scholarship and Awards Tea in Pemberton Hall.

The English department will be recognizing students during their annual awards ceremony, “English Departments Scholarships Awards & Tea,” at 3 p.m. Wednesday in the Tarble Arts Center.

Dana Ringuette, department chair of the English department, said the ceremony has been happening for over 50 years, and this year there will be more than $54,000 in funds for the scholarships.

University Honors will include nominations for the Livingston Lord Scholarship, the Hobart Heller Awards, the Distinguished Senior Award and much more.

In addition to these honors will be the recognition of members from Sigma Tau Delta, an International English Honorary Organization.

“Scholarship funds for students this year will amount to more than $54,000 and funds for prizes to students will be nearly $1000.  All of this is made possible by the donations of generous and gracious friends and supporters of the English Department, its students, and faculty,” Ringuette said. “We have been very fortunate which has allowed us to recognize and honor so many students.”

Prizes for the ceremony will include the James K. Johnson Creative Writing Award, the Louise Murray Award for Children’s Literature, Distinguished Graduate Student Award, Outstanding M.A. Thesis Award, the Cultural Diversity Essay Contest, English Studies Essay Contest, First-Year Essay Contest and the Winnie Davis Neely Award, which honors the student who wrote the best piece of creative writing in this past year’s edition of The Vehicle.

“(The scholarships) are monetary awards that go towards supporting (the student’s) continued education. The English Department has a faculty committee, the Scholarships and Awards Committee, who ask for nominations and students are encouraged to self-nominate and then for supporting statements from other faculty in English,” Ringuette said. “The committee’s purpose is to seek out and recognize students who have achieved great things while being an English major.”

There will be beverages served after the hour-long ceremony.
“The ceremony boosts morale for students, families, friends and teachers alike,” Ringuette said. “It’s a wonderful celebration of accomplishment, and faculty, families and friends are so proud of the recipients.”