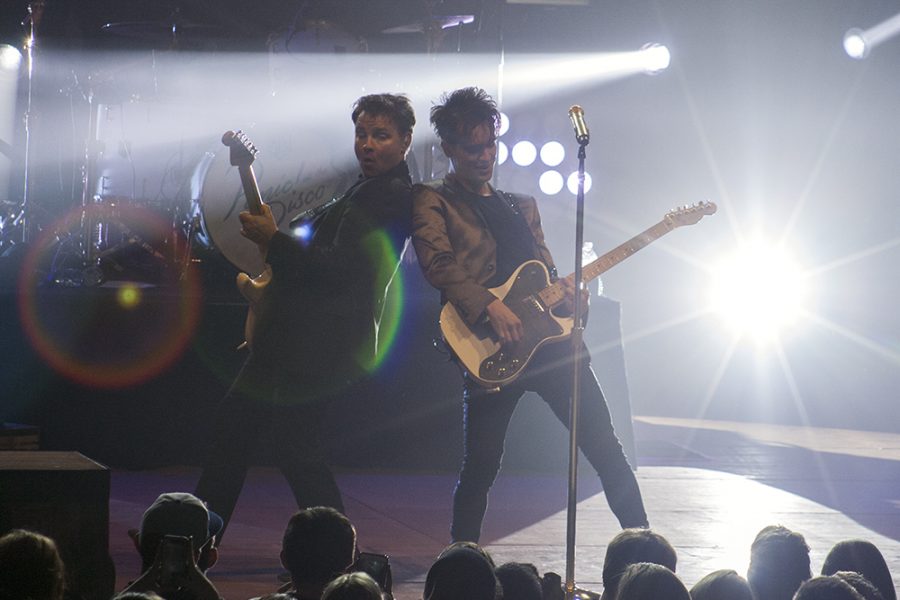 Panic! at the Disco perform during the Spring Concert Friday in Lantz Arena.

Smoke lingered into the crowd of Panic! fans, and as the room went dark and the band emerged, deafening screams filled the room, the stage illuminated with deep magentas and yellows.

Brendon Urie, lead vocalist for Panic! At The Disco, wowed the audience with hitting what seems like impossible high notes, backflips on stage, a cover of Queen’s classic rock song “Bohemian Rhapsody,” and performing “Miss Jackson” with Lolo.

Lolo amped up the audience with her soulful voice with songs from her new album and a cover of Beyoncé’s “Halo” before Panic! At The Disco hit the stage with “Don’t Threaten Me With A Good Time.”

During Lolo’s cover of the pop queen’s song, the audience turned their phone’s flashlight on and swayed their arms to the music, as the entire arena glowed with light.

Lines wrapped around the Student Recreational Center before the concert, and at the front was a group of dedicated fans from Charleston and Mattoon, who started waiting at the doors at 8 a.m.

Thomas Dial, a Charleston resident at the front of the line, said he and his friends love Panic! At The Disco.

“We bought our tickets as soon as they went on sale,” Dial said. “We have been out here all day listening to Panic! and making new friends in line.”

Not every concert attendee was from Eastern or the Charleston and Mattoon area, and two students extremely excited to see Panic! were from the University of Illinois at Champaign-Urbana.

“I love Panic! At The Disco. I really respect Brendon Urie a lot as a musician like with his songwriting and everything,” Sanders said. “I started listening to them a long time ago during my eighth-grade year with this music phase with bands like this, Fall Out Boy and blink-182, and I still listen to them now.”

After the concert ended, Nicole Brauneker, a junior elementary education major, stuck around with her friend to see if she could take a photo of Brendon Urie before he left the stage for good.

Brauneker said some of her favorite songs performed were “New Perspective,” “Nine In The Afternoon” and “Miss Jackson.”

“Panic! At The Disco is a band that I grew up listening to and they have always been very comforting to me,” Brauneker said.

Freshman elementary education major Emmy Greifenkamp was in the crowd with her girlfriend, roommate, and friends and said she loves all of Panic! At The Disco’s music, especially their earlier albums.

“I heard (Panic! At The Disco) on Sing Star when I was a little kid. I think watching their journey from not a very well known band to being so huge is something that is amazing,” Greifenkamp said.

As the band played through their set, the crowd became more and more and engaged with each song. With only seconds of instrumental intro to a song, the audience roared in excitement for the next tune as Panic! At The Disco played their older music.

Once Urie got behind the piano and began performing and singing “Bohemian Rhapsody,” the audience and the band became one, as they sang in unison.

After the concert goers reminisced over old Panic! songs, Urie turned up the crazy, living like a washed-up celebrity, the stage lit up like shooting fireworks on the Fourth of July and the night ended, victorious.