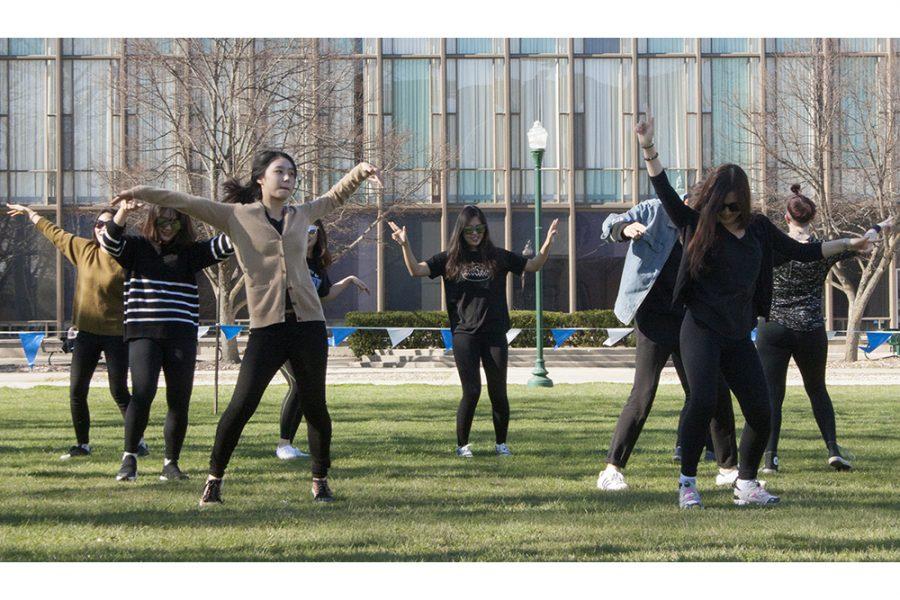 In honor of Asian Heritage month, international students from South Korea and students from the Asian Studies department danced to K-Pop tunes Thursday afternoon surprising passer-bys with a flash mob in the Library Quad.

Hunter Worthey, a junior History major, organized the flash mob and said she thought of the idea a year ago but there was not enough people who were interested to participate at first.

Jisoo Kim, a junior marketing major, is in her second semester at Eastern and returns to South Korea at the end of the semester.

Kim said she participated in the flash mob because she wanted to show Americans that there is good stuff in Korea.

“Most Americans don’t know much about Korea,” Kim said. “Especially about North Korea, they think of us as one country but we are totally different countries we just share the same name, it’s kind of sad.”

Kim said there are many prejudices about North and South Korea and she said she wanted to fix those in the minds of Americans.

As for the choice of music, Kim said they decided to use K-Pop music because it has become popular in Europe and the States.

Worthey said she was hooked on K-Pop in high school and wanted to include the music in the dance because it has become a big phenomenon in the world.

“(Dancing) was embarrassing at first but I forgot that and just enjoyed myself,” Kim said.

Worthey said even though the group had a short time to practice, they still did great and had fun.

“It shows they can have fun and no one would really judge them on it,” Worthey said.

Kim said her experience on campus was interesting.

“When I first got here, I was nervous to talk to American guys because I heard they were racist but it was not like that,” Kim said. “They were really kind and they are kind of open with a lot of things.”

Kim said she is going to miss it here but is planning to come here again.

Jessica French, a sophomore music major, said she was a bit different from the international group because she is an Asian American student.

French said since her mom is from Laos and her dad was born in Iowa and is of German descent, she is able to get the best of both worlds.

However, French said as she got older she would look into the mirror and feel like she did not fit in with either group.

“If you look at me you can’t really tell where I belong and it really gets to me,” French said.

French said it was weird meeting international students at first because there was an obvious cultural divide.

“I don’t feel like I completely connect,” French said. “But I want to reach out and meet these different people.”

French said she appreciates her heritage and can really understand both her Eastern and Western side.

French said the flash mob was important to share with the community because it shows them that different cultures can enrich the community.

“(We want to) tell them to open their perspectives and look at other parts of the world,” French said. “Because the world is a very vivid place and unless you are willing to try something new you will never know how great it is.”

Worthey said she hopes to do at least one more flash mob during Asian American Month next year and include people from other cultures.

“It is a nice way to interact with people and make more friends and share cultures,” Worthey said.