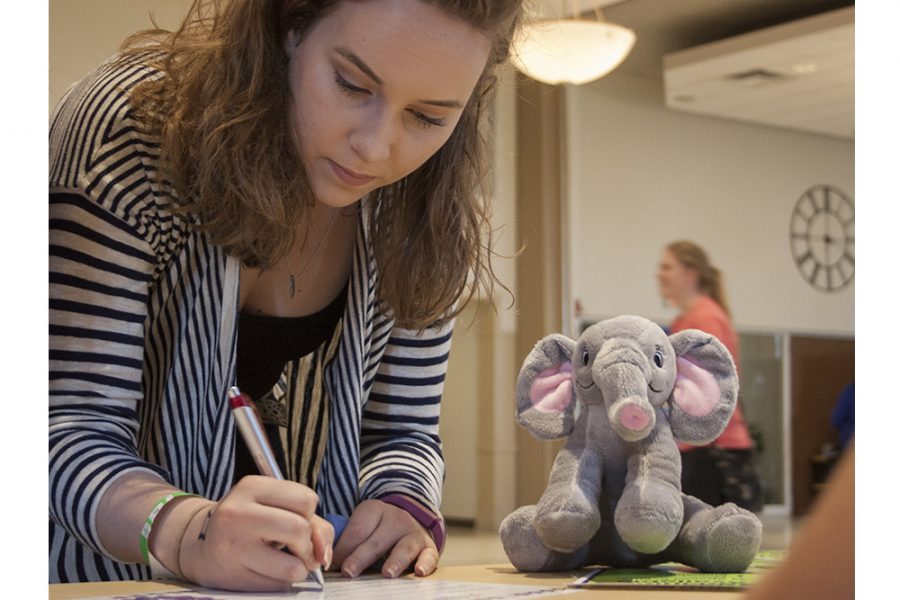 Kelsea Higgins, a freshman accounting major, fills out an adoption certificate for the stuff-a-bear she made Thursday in the University Ballroom during Pantherstock.

Students, faculty and community members gathered together with their friends and families in line for several activities at “Panther Stock,” hosted by the University Board, in the Martin Luther King Jr. University Union.

Brianna Harbold, designer for the UB and a senior graphic design major, was working at the Stuff-A-Bear table and said she was excited for Panic! at the Disco on Friday.

“I cannot wait to be in the crowd and listening to their music live,” Harbold said.

Harbold also said she enjoyed working at the Stuff-A-Bear because she thought the stuffed animals were cute.

Brinton Vincent, a graduate assistant in the Office Of Student Life, said he thought there had been a steady crowd throughout the night.

“I think a lot of students are enjoying themselves here,” Vincent said. “There is definitely long lines here at the caricature artist and a lot of people getting bears, so I think it’s going well.”

He was in charge of overseeing the event, and said he noticed the caricature artist seemed to be a favorite for the participants. Vincent would also be overseeing the ushers on Friday for the Panic! at the Disco concert.

“I love Panic! at the Disco, and they have just come out with a new album so I have been listening to that. My favorite song on the album is ‘LA Devotee’,” Vincent said. “I secretly want them to play ‘I Write Sins Not Tragedies’ just because I want to relive my childhood, but if not it’s okay I can just listen to it at home.”

In addition to students and other community members, Madison Tracy, a resident of Bridgeport, drove for almost two hours with her boyfriend after seeing the event of Facebook to come enjoy the activities at “Panther Stock.” Tracy made a key chain when she was there.

“Panther Stock” had several free activities for participants including license plate decorating, video games including “Street Fighter V”, “NBA 2k16” and “Injustice: Gods Among Us”, Stuff-A-Bear, a green screen to be in music videos, caricature drawings, roller skating and 3D printing of portraits onto glass key chains and cubes.