Festival of colors returns to Eastern 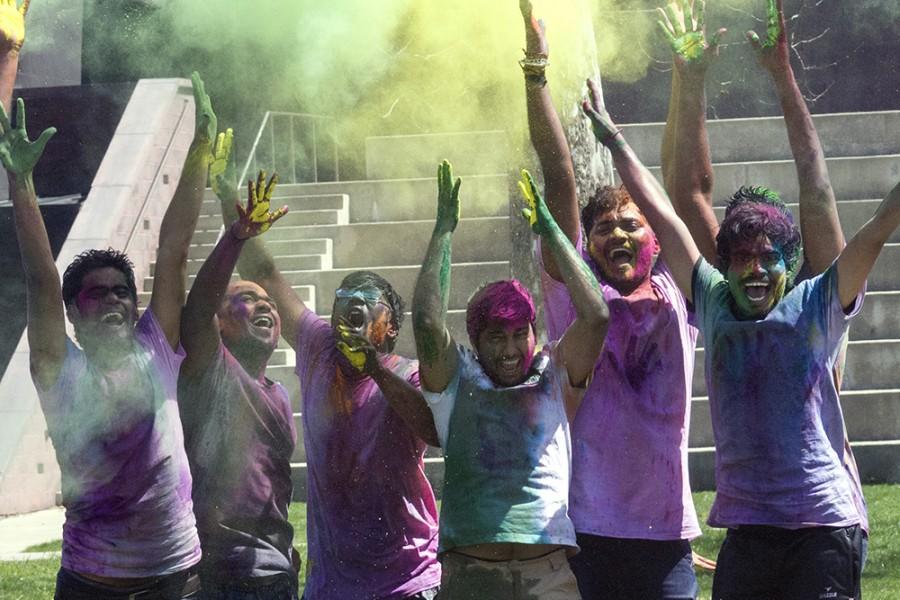 People raised their hands to throw different colors of powder in the air, getting it all over each other as Holi took place to celebrate the Indian tradition Saturday in the Booth Library quad.

It was thirty-five degrees but there were still about 50 international and American students at Holi. This was Holi’s fifth time being celebrated at Eastern.

Before they were allowed to jump in the ring of flags set up for Holi, students were outside the library waiting to throw the powdered paint. A few students were already drenched in colors.

When the Holi celebration began, people were in the ring tossing the colored powder and water on one another while screaming “Happy Holi.” Rajesh Venkata Goriparthi, president of the Indian Student Association, said Holi is a celebration back in India and he used the day at Eastern to hang out with his friends.

“People come out, greet each other and put colors on,” Venkata Goriparthi said.

Samuel Thomas, 4, son of Krishna Thomas, the chair of Asian Heritage Month, said he had fun along with his little brother Anthony, 3. They both said they liked the powdered paint.

Many students appeared to have smiles on their faces and were laughing as the paint and water was dumped on them. Sometimes, students were unaware of a person getting ready to splash water and throw powered paint on them.

Some students showed an expression of surprise as they were caught unaware.

Many students said they were excited for Holi to take place this year.

Lavanya Methuku, a graduate student majoring in technology, said she recommends those who did not come to Holi should go.

“It’s very cool. In India we play a lot with colors,” Methuku said. “Everyone can have fun with colors and it’s a good time to be here.”

“I’ve done it for the last two years and I’ve enjoyed it immensely,” Hodge said.

Students had been asking Goriparthi about when Holi would be because of the many American students enjoying the event in the past.

“People look at us and they try to understand our culture and celebrate the culture,” Goriparthi said. “They try to be a part of it, which makes us feel very proud of it.”

Martina Karmakar, a graduate student majoring in business administration, said Holi is always fun because it is bringing in the spring season.

“This is an experience of life,” Karmakar said. “In India you have everything to play with.”

American students said they had as much fun as the Indian students.

Madeline Reiher, a freshman environmental and physical geography major, said she would like to do more research on Holi because she is not too sure on what every part of Holi means. Despite being cold, she said she had fun, loved it and felt very alive.

Heather Moore, a senior interpersonal communication major, said Holi is an amazing experience for everyone gathering on the quad on a Saturday morning goofing off.

“I’ve been advertising with everyone I knew because I didn’t get to go last year and I saw how much fun everyone had,” Moore said.