Baseball continues to fall after being swept 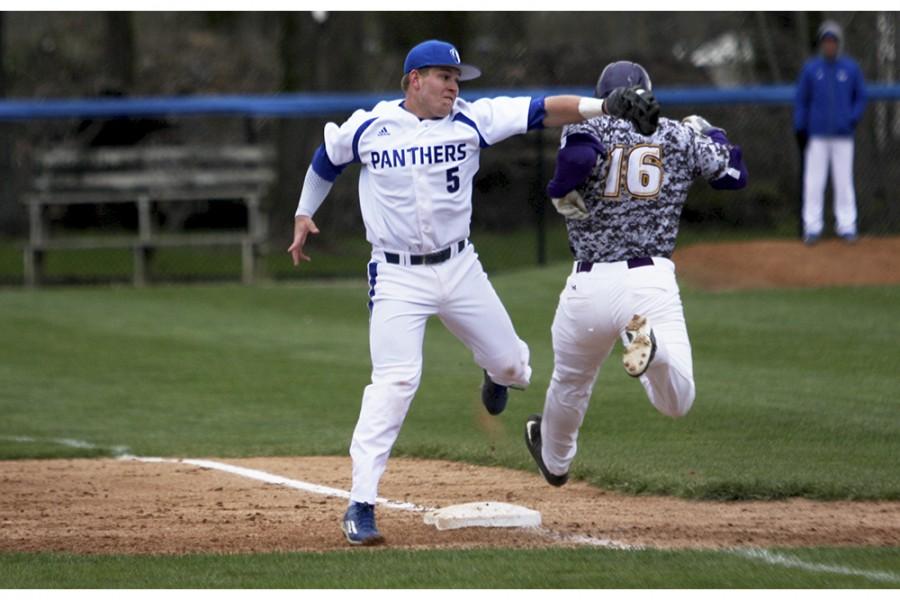 First baseman Hunter Morris attempts to tag a Tennessee Tech player out at first base during game 1 of a three-game series against the Golden Eagles. The Panthers lost Friday’s game, 3-8.

It’s a tie game in the top of the ninth with two outs, two strikes, and the bases loaded.

The Panther fans are cheering and waiting anxiously, and the Eastern dugout is silent in anticipation as junior Jake Haberer gears up for another pitch on the mound.

Haberer gets the sign from his catcher, rears back for one final strike, but the batter had some plans of his own.

The Tennessee Tech left fielder Tyler Brazelton turned on the pitch, and sent it straight over the fence for a go-ahead grand slam.

Not only did that pitch define the game for the Panthers, but it was another late-inning loss that represents how this season has gone.

That devastating moment for the Panthers happened in the series finale against Tennessee Tech over the weekend.

That at-bat led the Golden Eagles to complete the three-game sweep over Eastern, and also handed the Panthers their 26th loss of the season.

“We lose hard, and it’s because we beat ourselves,” Eastern coach Jason Anderson said.

Eastern dropped to 5-26 overall with the sweep, and 1-11 in Ohio Valley Conference play.

The Panthers had plenty of opportunities throughout the series, but their own mistakes came back to bite them.

Game one offered some hope early in terms of offense as the Panthers scored runs in the second and third innings to tie the game at 2-2.

One of those runs was provided by senior Frankie Perrone sending a pitch over the left field fence for his first home run of the season.

But Eastern’s offense just about went cold after that as they went on to score just one more run in the game.

Not only did the Panthers’ offense struggle, but the defense proved to be costly in game one.

Eastern had four errors on the day, and that led to junior Michael McCormick yielding seven runs in 5.2 innings pitched.

While McCormick allowed seven runs, only two were earned as the Panthers fell to the Golden Eagles 8-3 to open the series.

“It’s really hard to pitch for us right now, because we don’t make a lot of plays and we don’t score a lot of runs,” Anderson said.

The Panthers came into games two and three much more efficiently and prepared to get a win.

There was a change in scheduling as the two teams played in a double header on Saturday because of possible inclement weather forecasted for Sunday.

With a lot of baseball in store for Saturday, the Panthers and Golden Eagles went head-to-head in back to back games.

Game one of the double header and game two of the series seemed like the one where Eastern would come out victorious.

The Panthers got started early as Joe Duncan came around to score on a passed ball that gave the team a 1-0 lead.

The Golden Eagles were quick to respond as a double from Brazelton scored a run, and tied the game at 1-1.

After going back and forth in a low scoring game, the Panthers held a 3-2 lead going into the eighth inning.

And that is where it all fall apart once again for Eastern.

Sophomore Andy Fisher was sent to the mound in relief for the senior Matt Wivinis, and surrendered three runs in the inning.

Tennessee Tech took a 5-3 lead with that three run inning, and held that score to end the game with another win over the Panthers.

Fisher was dealt the loss, and Wivinis earned a no-decision after allowing three runs on eight strikeouts, two walks, and six hits in seven innings pitched.

That late game falter caused the Panthers to drop game two of the series and game one of the doubleheader.

Eastern was forced to have a short memory as game two of the double header and game three of the series was set to begin 20 minutes after.

With the biggest moment of the game and series being the game-winning grand slam, another story was Eastern’s comeback attempt.

Senior Brendon Allen was on the mound for Eastern, and ran into trouble after allowing three runs in the fifth.

After falling behind 4-1 in the first six innings, the Panthers put together a rally in the seventh inning.

Eastern scored three runs in the inning to tie the game after back-to-back singles from Perrone and Mitch Gasbarro.

Senior Jason Scholl followed with a walk to load the bases, and the Panthers earned a run with a walk from Matt Dunavant.

Freshman Dane Toppel was next to bat for Eastern, and caused a late-inning controversy.

On the first pitch of the at-bat it appeared that Toppel was hit by the pitch, and brought in another run for the Panthers.

But after a controversial call from the umpire it was decided that he was not hit by the pitch.

After returning for the rest of the at-bat Toppel answered with a two RBI base knock to tie the game for Eastern.

Toppel had a special day at the plate as he had two RBIs, and went 4-for-8 combined in the doubleheader.

But as earlier said, the Panthers’ hopes were diminished with the 9th inning grand slam.

Eastern managed to plate two more runs in the bottom half, but the comeback fell short as the Panthers lost 8-6 in the series finale.

It is a tough series loss for the Panthers to swallow as they are still without a series win since April 26, 2015.

“We’re going back to fundamentals,” Anderson said. “Offensively we aren’t real strong so we have to do some things more fundamental.”

Eastern has another quick turnaround now as the team travels to Carbondale to take on Southern Illinois in a single-game matchup.

First pitch of that game is at 5 P.M. Tuesday, and following that game is a three game series against Southeast Missouri State on the road.