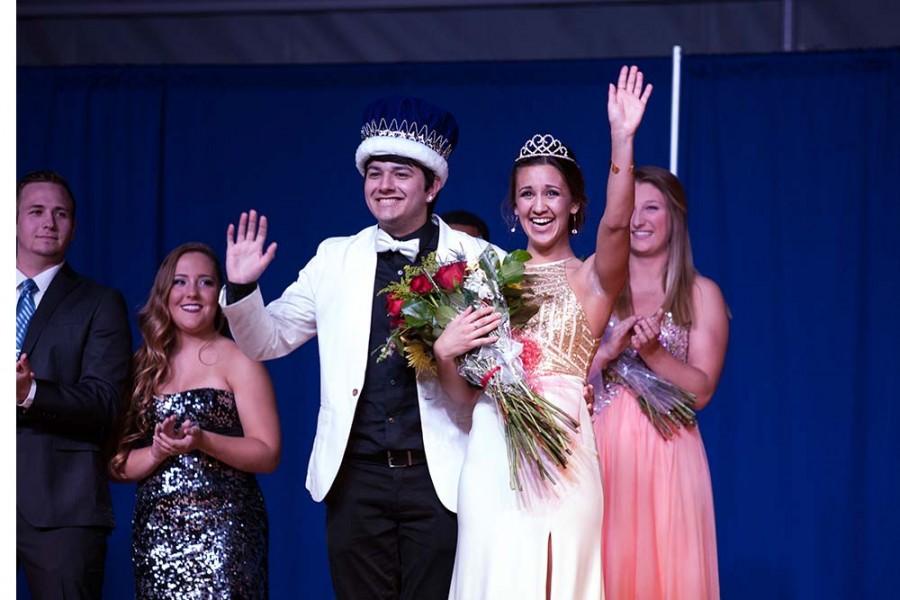 Just simply being nominated by his house was an honor but, winning was an exciting and humbling experience, Guerrero said.

“The whole week I had butterflies in my stomach,” Guerrero said. “I was so excited all the hard work with the house was being noticed and it paid off.”

However, Guerrero said walking in the gym with close friend Olivia Links was one of his favorite parts.

“It was awesome and super fun to walk down with him. We danced a bit of the salsa the whole way down the aisle to ‘Suavemente!’,” Link said. “I felt so proud and happy for him once he was called King. No one deserves it more than him.”

Alpha Phi Sorority vice President Michala Wood said Persico was nominated because of her dedication to the sorority and her caring personality.

“She is genuinely nice to everyone she meets, and she is a highly respected member of our chapter,” Wood said. “She is the perfect woman to represent Alpha Phi as well as the Greek Community as a whole.”

Both Guerrero and Persico joined the Greek community freshman year and have been active in their chapters ever since.

After seeing the coronation for the first time Guerrero personally set a goal to eventually run for King because he thought it would be a cool experience.

“I remember watching it and I said, ‘I would love to do that’,” Guerrero said. “I would have never thought as a baby freshman that I would get a chance to do this.”

After the nomination the Greek members go through a process in preparation for coronation.

First step, is accepting the nomination, second step is completing the application third is a series of interviews from the judges and lastly is encouraging peers to vote for them.

Three judges interviewed each candidate separately to determine who would best represent not only their chapter but the Greek body as a whole.

“It felt great to represent our house. I want to make our house as great as it can be,” Guerrero said. “I just try to be a great representative.”

The role of Greek Royalty is to honor members in the Greek community who have impacted their chapter, has held an executive position, who demonstrates their chapter’s credo and who can represent Greek unity.

Wood said all of the members consider Persico a friend and a role model because of her involvement with the sorority.

“Two months into her joining the house she ran for a position on the executive board, and of course won,” Wood said.  “In addition to being a leader and holding positions, Talia is always involved in everything going on in the chapter.”

Guerrero has participated in Airband, Greek Sing, pyramids, painted banners, cans for construction volunteer event and the stroll off.

This year Guerrero was one of the coaches for Greek Sing which was a new experience for him while also participating in Airband.

“Being able to coach was cool because I could help make u the dance moves and pick the harmonies,” Guerrero said. “I was proud of the guys that did it because they all did a great job.”

Persico, who participated in the coronation, was also a part of the Alpha Phi tugs team.

Tug-of-war competition requires all of the members to use physical strength and energy to get the opposing sorority to touch the lake.

Alpha Phi sorority won the second round and will advance to the final round of tugs.

“You can always count on Talia to be wearing a big smile and a positive attitude at all times,” Wood said. “She is also, hardworking and devoted to everything she gets involved in.”

Both King and Queen actively participated in Greek Week events and even though it can be time consuming it is all worth it in the end, Guerrero said.

“Greek Week in general is a cool way to bring Greeks together,” Guerrero said. “ You get to work with your brothers and it brings us closer for the better. I think it makes the brotherhood and sisterhood stronger.”

Both King and Queen are known for being social and for being open to talk to any one regardless of membership.

“She consistently puts others before herself,” Wood said. “ Talia is genuinely nice to every person she meets.”

Guerrero said he wants to use his title to continue to spread unity and be a bridge of communication to all the Greek community members.

“I have always been a person who can talk to anyone in Greek life. I try to branch out,” Guerrero said. “I always try to spread Greek unity, realistically we all can all be each others brothers and sisters.”