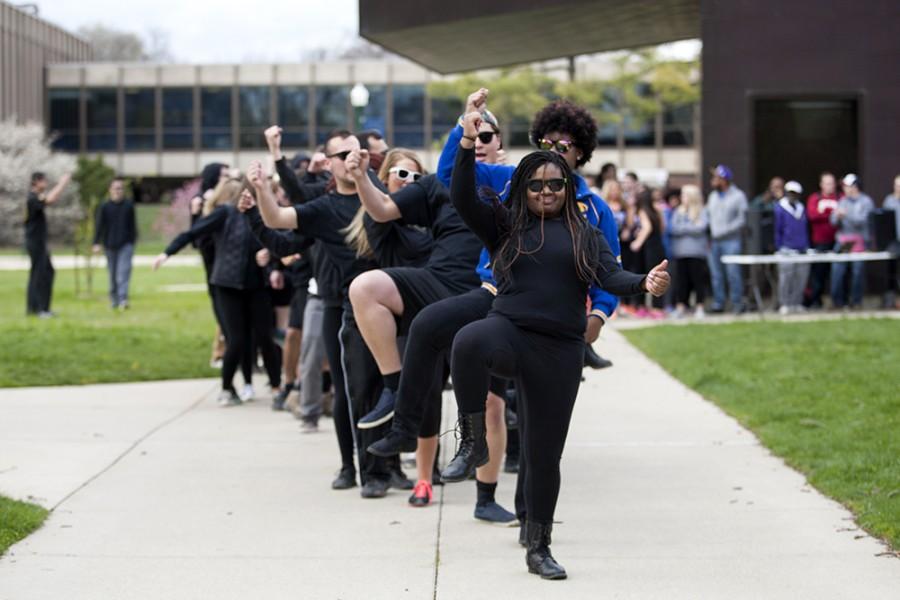 Greeks goin’ up on a Thursday while dancing during the Greek Week Unity Stroll event in front of Doudna Steps.

Tables turned and roles were somewhat switched when the PanHellenic Council, Interfraternity Council chapters did some of the traditional steps from the chapters of the National Pan-Hellenic Council.

Greeks were found dancing and singing throughout the Booth Library Quad near the Doudna Fine Arts steps for the Unity Stroll.

While NPHC chapters executed some of their traditional strolls, PHC and IFC danced to their own beats.

Madison Endsley, a sophomore communications major, is a member of Delta Zeta Sorority and said the Unity Stroll brought all the Greek Houses together. She said both Airband and the stroll incorporate dancing with goals of bringing overall harmony.

The first team danced to songs like Migo’s “Dab,” and “Drip From My Walk,” by Famous Dex.

Rihanna’s “Work” followed by Fetty Wap’s “Jimmy Choo,” sounded when team two hit the cement.  The women of Zeta Phi Beta stood on both sides and other Greeks in the middle as they performed.

The third team stood in a line as the Omega Psi Phi’s known song “Atomic Dog” by George Clinton boomed through the speakers. The Omega men did their trademark headshake and hops while the song went on.

“This brings a good dose of diversity,” Dorsey said. “Diversity is something that we can carry over to the workforce and it teaches us on how to deal with different groups of people.”

JaLisa Smith, a senior psychology major, was a coach representing Sigma Gamma Rho and said she has been participating in the Unity Stroll for a couple of years and said she loved her team.

Smith said the day let the other fraternities and sororities in on how hard the chapters of NPHC work.

“It can be hard for someone to understand all the things that we go through,” Smith said. “They love it, I love it. It’s unity.”

Smith said she took on three teams in one because of it only being three NPHC chapters participating.

The Greeks who came to practice always were enthusiastic and ready to learn their routines, Dorsey said. He said now that the event is over with; he has gained new connections and even friends.

“I’ve build like 18 relationships and that’s something I probably would have never did without this event,” Dorsey said.

Fellow members of each Greek cheered loudly for those stepping.

“One event is not going to bring everyone together, but it’s a start,” Ruane said. “Inviting everyone to more events could to slowly bridge that gap.”