Students and faculty rally for funding 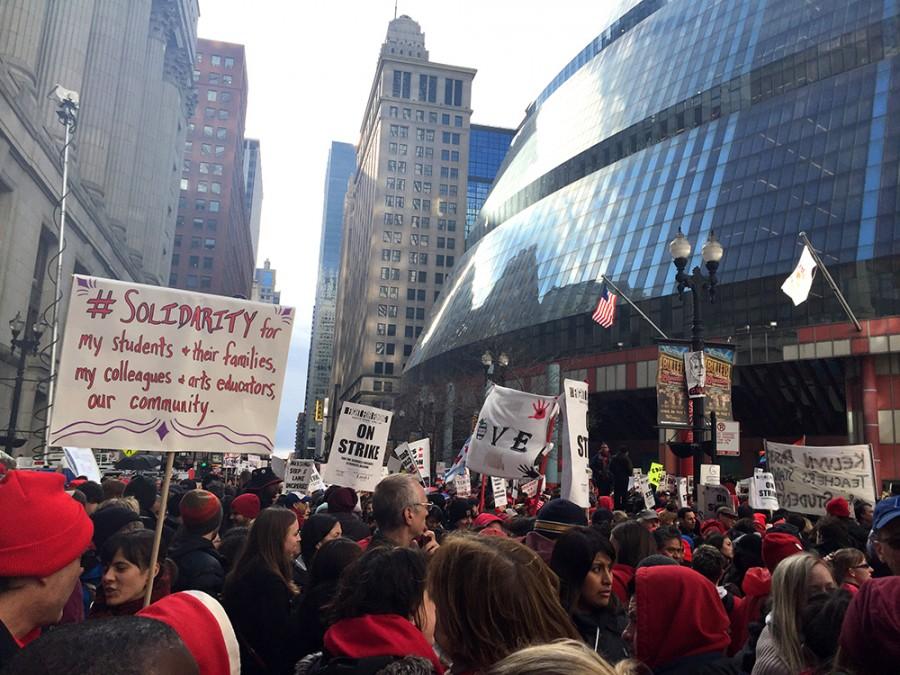 A mixture of professors and students from state universities stand outside the Thompson Center in downtown Chicago during a rally Friday. Some of the schools with representatives at the rally include Chicago State, Eastern Illinois, Northeastern Illinois, along with the Chicago Teachers Union.

A group of 53 Eastern students and faculty traveled to Chicago to participate in rallies for higher education funding along with other chapters of the statewide University Professionals of Illinois.

These rallies were a part of a “Day of Action” that included a strike by the Chicago Teacher’s Union and “Fight for 15,” which was a protest advocating for a $15-an-hour minimum wage.

The rallies started at Chicago State University. Many people held up signs saying, “Save Illinois Schools” and “Education is Power.”

Before the rally started, the Chicago State Singers sang “We shall overcome,” and others were dancing.

At the rally, various speakers, including William McNary of Citizen Action Illinois; the Rev. Jesse Jackson; Karen Lewis, the president of the Chicago Teachers Union; and John Miller, the president of the University Professionals of Illinois, talked about the lack of a state budget and how it is affecting teachers and universities.

McNary acknowledged each state university, including Eastern, and called on Gov. Bruce Rauner to pass a budget.

“(We are gathered here) to let Gov. Rauner, and all the millionaires and billionaires know they need to work for the students and not just for themselves,” McNary said.

Miller said their fight is for the future.

“We all deserve to fight. To have a voice. To have a future,” Miller said. “To demand funding for our students, for our children, for quality education for all.”

Chicago State students such as Christopher Glen, who is also the National Pan Hellenic Council president, talked about what Chicago State meant to them.

Glen said education is a right for all, and it is not right to have a governor and state legislature that cannot work together to agree on and pass a budget.

“What do these people really want for us?” Glen asked. “How are they serving us, our communities?”

Eastern biology professor Eric Bollinger said he canceled classes that day to come to the rally because he think it is important to stand up for what is right and for students to learn the importance of this.

As a professor, Bollinger has seen the effects of the budget crisis as it has caused funding to be frozen and made it harder to order equipment and impaired students’ ability to do their thesis.

He said it is aggravating that time that could be spent on teaching, research and advising had to be spent rallying for funding.

“It is galling to me that someone like the governor, who grew up in a rich family, attended Dartmouth, is trying to deny higher education to people much less financially well off,” Bollinger said.

“CSU really supports a population that does not get much support,” Lawrence said.

Like Bollinger, Lawrence was also able to talk to members of Chicago State’s UPI.

“They’re very scared, and hopeful that things are going to change and the governor will pass a budget and they will be able to continue,” Lawrence said.

Lawrence said shows of solidarity like the union are important to get people energized and to get people to do more in the future.

“Whatever it takes,” Lawrence said.

English professor Carol Jean Dudley said all unions need to stand together in order to support each other.

She said the message of solidarity was something that stuck out to her and there needs to be work to connect with other unions.

“(We need to) demonstrate that unions are, in fact, a very positive thing in our society,” Dudley said. “(Gov. Rauner) is trying to destroy our unions and we don’t want that.”

Jalen Myers, a junior biological sciences major, said she decided to come to the rally because Eastern is her home.

“I could stay at Eastern forever and not complain,” Myers said.

Barden’s daughter Zuri also went to Chicago State when she was younger.

“Both institutions are dear to me but as a south sider, I came to support students and to express my solidarity,” Barden said. “As a kid I grew up on this campus, going to daycare.”

Damon Williams, a member of the Black Youth Power 100, who were protesting at the rally, said the budget impasse is a dire crisis that is man made.

After the rally, there was a march to the McDonald’s in solidarity with the “Fight for 15” workers and to Harlan Community Academy High School in support of Chicago Teachers Union members.

As protesters marched, they yelled “Hey, hey, Ho, Ho, Bruce Rauner has got to go,” “Freedom, Freedom,” and “They say cut back, we say fight back.”

As the ralliers made way to their destination, a couple of cars honked in support of their cause.

Students and UPI members were also present for a larger rally in the Thompson Center later that day, where more groups and unions were rallying.

More signs could be seen, with “Save students not bankers,” and a skeleton wearing a graduation gown and cap waving in the air.