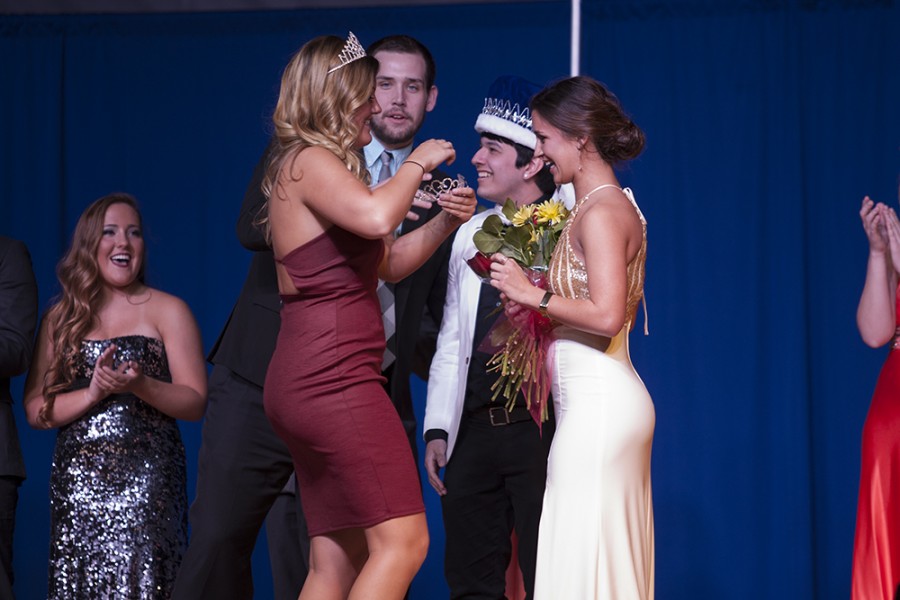 Talia Persico from Alpha Phi and Daniel Guerrero from Sigma Phi Epsilon were crowned King and Queen of the 2016 Greek Week Saturday during Airband in Lantz Arena.

The Lantz Arena shook with cheers and roars Saturday night as the 2016 Airband Competition kicked off for this year’s “Endless Summer” Greek Week.

19 fraternities and sororities piled into Lantz and danced their hearts out, their fellow brothers and sisters cheering them on every step of the way, for a chance at a glowing trophy and points toward an overall Greek Week victory.

The king and queen for Greek Week were also nominated Saturday.

“I’m in shock, I couldn’t believe it,” Persico said. “When I heard my name, and I couldn’t hear it at first but when everyone looked at me I was like ‘is that possible?’”

Persico said she could not have done it without the help of the student body, and she cannot believe she got nominated in the first place.

Persico said she was nervous and did not know how to prepare after receiving the nomination.

“It’s an honor,” Persico said. “I think (Alpha Phi) are all on cloud nine and I think everyone can celebrate with me.”

Alpha Phi took first place for sororities in Airband, and Pi Kappa Alpha took first for fraternities, a step up from last year when they tied for first with Sigma Phi Epsilon.

Dancing to choreographed routines that many spent countless hours perfecting, the teams matched their music to their own innovative themes that set them apart from each other.

Pi Kappa Alpha welcomed the audience to their jungle adventure routine introducing them to the “animals” they have become.

Daniel Hernandez and Alexis Sheehy, the captains for Pi Kappa Alpha, said it took a lot of work before they could even consider a victory including setting their friendships aside for the sake of doing better.

“I had to be stern with the guys and I had to let them know that I’m in charge,” Hernandez said. “I told them, ‘you have to listen to me now, I’m trying to do what’s best for us’.”

Hernandez said he asked his teammates for their respect and asked that they respect Sheehy as well who perfected the final dance before showtime.

Sheehy said having the right people who were willing to work helped lead them to their victory.

“We had good people who would do that and who were serious about it,” Sheehy said. “Sometimes they have more respect for an outsider and they were good (to me).”

Hernandez said the inspiration for the routine came to him after listening to classic rock with friends particularly “Welcome to the Jungle” by Guns N’ Roses.

However, though it was a solid idea, Hernandez said it was difficult to train for the dance and his teammates had to break out of their comfort zones to perfect their routine.

Hernandez said he told his team to get out of their normal character and give it their all as if they were never going to do it again because if they did not then their routine would not look good.

“Some of the guys are new and they didn’t know that you had to take this a lot more serious than you think it is,” Hernandez said. “You hear a dance competition between fraternities and think ‘oh this is going to be funny or a joke’ but we took it serious.”

After placing first, Sheehy said she felt happy and Hernandez said all the stress he had from coaching his team was all worth it in the end.

The dance team for Alpha Phi, dressed in matching leopard print, said they were born to be wild as they made the crowd go wild with their themed routine.

All dancing in the same step and never missing a beat, the girls from Alpha Phi showed the crowd what they were made of and brought them to their feet when they used a stuffed Simba in their routine.

“First we had to come up with the choreography, which took a couple days and hours and we taught all of them the basics and then we started getting really picky with running it over and over again and making it clean,” CoCo said.

Abraham said disputes were bound to happen considering they were working with 14 women, but in the end they set aside their differences and worked toward their common goal.

“We are all dancers and we know that there is a certain level of professionalism that you have to have,” Haugh said. “We’re all adults and we don’t get hurt about it and I feel like we’re very mature in that aspect.”

As for placing first, the women said standing on stage and hearing the names run off was nerve wracking.

“I remember when they were announcing third place, second place, we were squeezing each others hands,” Coco said. “My stomach was dropping every time the pause happened.”

After their victory, the entire sorority circled their team onstage and in one collective voice they sang the sorority song with pride for their sisters.

“We are very proud of ourselves, we put in so much effort for this and I just feel like we had so much banking on this,” Haugh said. “It’s just an amazing feeling.”