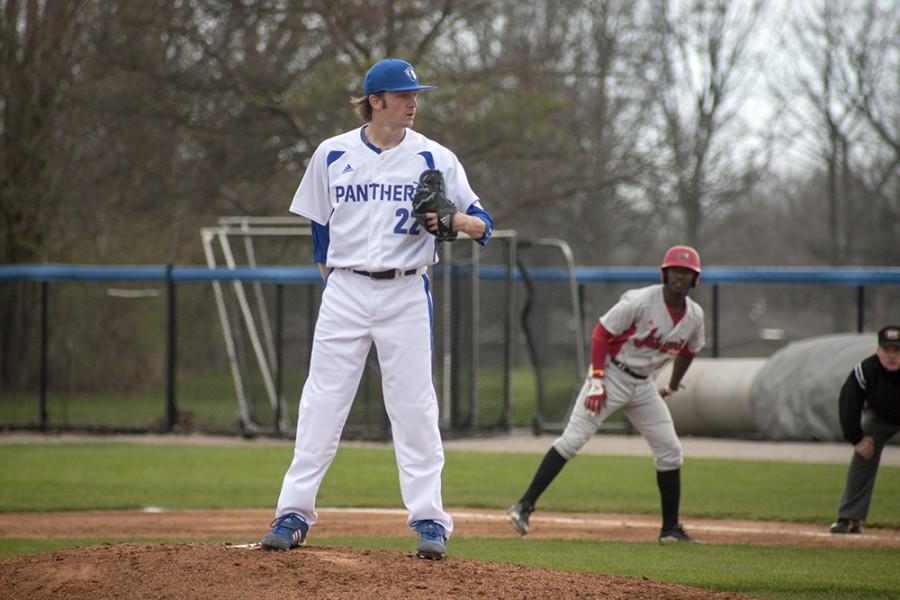 Junior pitcher Michael McCormick looks to the catcher for the pitch before throwing it to teh batter in the game against Jacksonvile State Thursday at Coaches Stadium.

Junior pitcher Michael McCormick’s earliest and favorite memories are where his baseball career started: in his backyard with his dad.

“My dad got me started in the game by playing catch every day,” McCormick said. “I started at age three, when I could pick a ball up, and as I got older me and him would play catch out in the backyard, and I fell in love with the game.”

Although McCormick has come a long way from those days in the backyard, he still works hard every day at practice to get better and improve his pitching.

“We work on the typical stuff to get better at practice,” McCormick said. “We like to work on fielding and pitching and we lift weights two or three days a week. Mentally, I just like to go out and have fun. It’s just baseball. I like to stay relaxed.”

McCormick pitched seven innings, striking out six batters against Jacksonville State over the weekend. Six strikeouts is now a career high for him at Eastern.

“Practice was relaxed. We knew we needed to get a better spot in the OVCs,” McCormick said. “Unfortunately we weren’t able to come up with a win, but we went into the game with a level head.”

McCormick has pitched in seven games this season for the Panthers, with wins against Arkansas and Memphis. 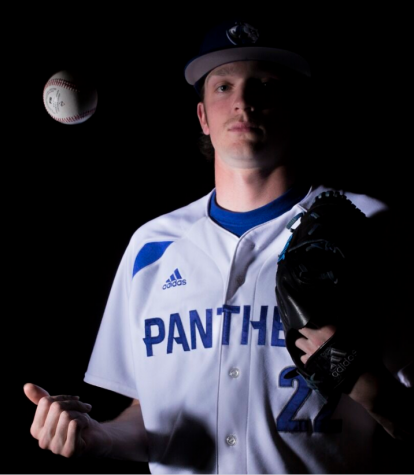 McCormick took a loss against Arkansas after defeating them the day before, but the loss was a game to note. He struck out two batters in three innings and for a total earned run average of 3.00.

Although this is his first year at Eastern, this is not McCormick’s first year of collegiate baseball.

McCormick began his career at the U.S Naval Academy, and for his second year, McCormick played at nearby Parkland College in Champaign.

At the U.S Naval Academy, McCormick made fourteen appearances on the mound while starting four games, striking out fifteen batters in 24.1 innings.

“Playing for the Naval Academy is a lot different because of all the separate physical activity,” McCormick said. “There is a lot of outside running and getting up early, besides just going to practice.”

At Parkland, McCormick made eleven appearances out of the bullpen pitching 48.1 innings while striking out 33 batters.

“The hitters I face at Eastern are better than the ones I faced at Parkland, but the game is the same,” McCormick said.

So far at Eastern, McCormick has a 6.23 earned run average, has pitched 26 innings, and has struck out 17 batters.

Fellow pitcher and teammate Jake Johansmeier is impressed with McCormick’s abilities to mesh so well with the team so early, he said.

“Mike is a great teammate,” Johansmeier said. “It usually takes new guys a while to come out of their shell, but he embraced us and we embraced him. The dude is hilarious and he works hard, there really isn’t much more you can ask for in a teammate.”

“A big part of why I came to Eastern was due to Coach Anderson,” McCormick said. “Being a pro-guy like himself, there is so much to learn from him.”

Coach Anderson is equally as excited that McCormick chose to come to Eastern.

“We recruited Mike because we thought he could be a front line starter in the OVC,” Anderson said. “He has a mix of pitches and competes on the mound.”

And with such impressive performances like McCormick’s last week, Coach Anderson is definitely pleased.

“Mike really turned it on last week after some up and down performances. It takes a little time to get adjusted to Division 1 baseball and I think Mike has finally figured out how to have success,” Anderson said. “Outside of his pitching ability, I really like the way Mike prepares and plays the game. He doesn’t mess around and really focuses on doing what it takes to win.”

McCormick’s ultimate goal is to become a professional baseball player in the Major Leagues, and Coach Anderson is his inspiration.

“My dream is to play professional baseball,” McCormick said. “For any team, it doesn’t matter. I just have dreamed about it ever since I was young.”

With that goal in the back of his mind, McCormick’s short-team goals are simple.

“I want to help my team win the OVC tournament,” McCormick said. “I would also like to help my team make it to the Regional, something that hasn’t been done here at EIU in a while.”

McCormick said he has been a pitcher all of his life, and his ability to remain clam in high-pressure situations keep him on his toes and it’s what makes him love pitching and the game of baseball.