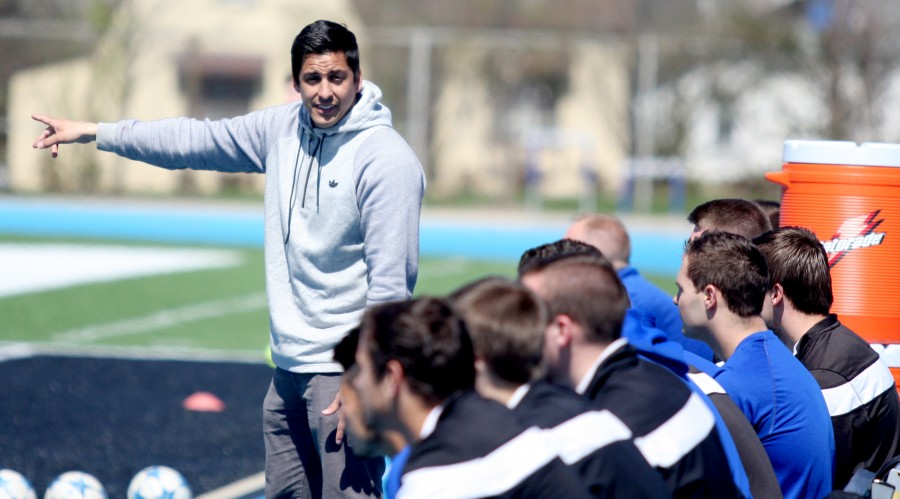 Sean Hastings | The Daily Eastern News| Coach Kiki Lara directs the men's soccer team Saturday during the game against Western at O'Brien Field. Lara is the coach of both the men's and women's team.

Lara talked about the transition from coaching one team to both teams this spring.

“Honestly it has been a nice adjustment,” he said. “We’re passionate about coaching in this area. We have a really good staff and they all understand the methodology we want to get across.”

Both teams have a slate of spring games to be played on Lakeside Field this April and have already played a game each against Western Illinois last Saturday.  The women play again with a doubleheader on April 2nd against Valparaiso and Lewis University.

For the spring games, the doubleheaders are two 60-minute games and the one-day games are played the regular 90 minutes. The games are more for the coaches in terms of development as there is nothing official to the games as far as stats are concerned.

Lara is taking control of both these teams in good spirits that his fellow coaches and players are both buying into his coaching philosophy.

“The boy’s team and the girl’s team are both buying in and bought in to the ideas that we’re coming across,” he said. “It’s been kind of a shared effort between players and staff and timing wise there is time in the day. It has been actually a pretty nice blessing.”

Lara has never been a head coach for a women’s team, but has been an assistant coach for a team in the past. He has only taken over the women’s team for three months now and explained that there will be no differences on how he teaches the teams.

The women still have some needs to fill for the 2016 class, but Lara is confident that if they are like the most recent class they will be a good fit for the team moving forward.

“I don’t have a ton of experience watching them and working with them just yet,” he said. “For me, stylistically, it sounds like they’re going to be a good edition.”

Lara has embraced his new role as the director of soccer and will continue to get both teams prepared for the upcoming fall season.