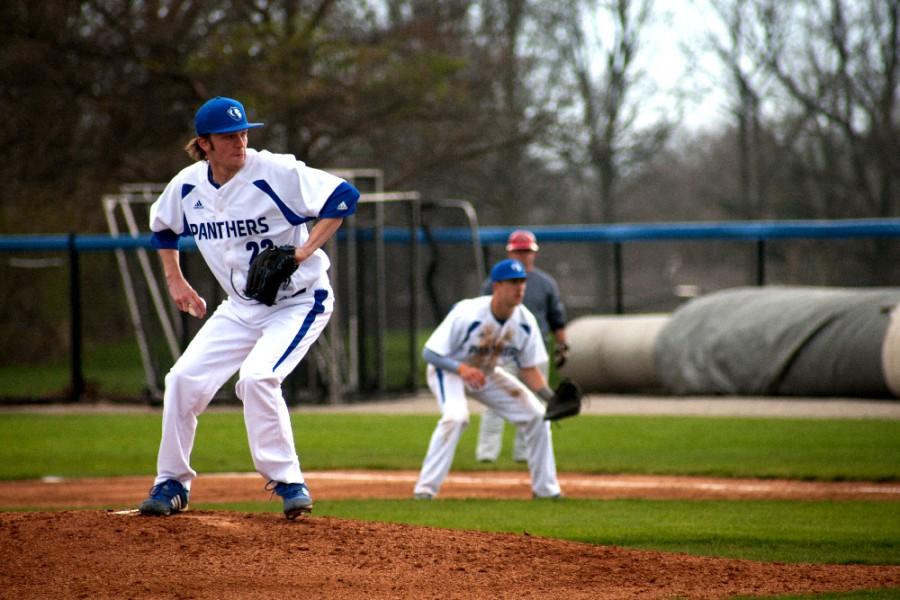 Junior pitcher Michael McCormick goes through his windup during the Panthers 6-4 loss against Jacksonville State Thursday at Coaches Stadium.

The Panthers were threatening in the ninth inning trailing 6-4 getting the bases loaded but that is the way the game ended.

The Panthers trailed 6-2 heading into the ninth and senior Matt Dunavant pinch hit for freshman Jimmy Govern and drove in the third run of the game. Redshirt senior left fielder Demetre Taylor hit a hard groundball to short that was not fielded cleanly and a run scored.
Eastern’s record falls to 0-4 in OVC play and the Gamecocks improve to 7-0 in OVC play. The two teams will meet up tomorrow at Coaches Stadium for the second game of the series and finish it up on Saturday.

The teams were scoreless through the first two innings but Jacksonville State got on the board in the third inning and never trailed in the game.

Junior Michael McCormick got the start on the mound for the Panthers and would take the loss.

The right-hander went seven innings allowing five runs but only three of them were earned. Eastern committed three errors that proved to be costly at the end of the game.

He allowed eight hits and struck out six batters in his seven innings of work.

“He was big time, he was huge,” Anderson said. “For opening the OVC weekend, that’s what we needed: A guy to come out and give us a chance and he did everything he could. Defense didn’t help him out on a couple plays.”

The Gamecocks got their first run off an error by senior catcher Jason Scholl. McCormick struck out Gavin Golsan on a drop third strike but Scholl’s throw down to first hit Golsan allowing him to be safe at first.

Jacksonville State scored its fourth run of the game of an error as well. Paschal Petrongolo reached on an error by sophomore second baseman Cale Hennemann. Petrongolo came in to score a few batters later on a sacrifice fly to center field.

Petrongolo made it to second on a fielder’s choice and to third on a wild pitch.

Eastern did outhit the Gamecocks but Jacksonville State was able to get timely hits and Eastern was not.

“We need clutch hits,” coach Jason Anderson said. “We haven’t had them for a while. We got a lot of opportunities today and we just don’t put good swings on the ball when we’ve got guys in scoring position.”

Eastern stranded 10 runners on base in the game.

Taylor went 1-3 in the game with a double. Taylor lined one down the right field line to lead off the sixth inning. Taylor came around to score off Turnock’s sacrifice fly.

It was a very windy day at Coaches Stadium that knocked down any fly ball that was hit to right field and taking any ball hit to left towards the left field line.

Senior first baseman Mitch Gasbarro almost hit one over the left-field fence in the fourth inning but the ball held up long enough for Peyton Williams to make a catch on the warning track crashing into the left field fence.

Graham Officer got the start for the Gamecocks and would walk away with the win. Officer went 5.2 innings allowing one run on eight hits and striking out three.

He was replaced by Nate Sylvester who came in and shut down the Panthers in the sixth and seventh. He allowed just one hit in his time on the mound.

Garrett Farmer came in for 1.1 innings but was pulled and replaced by closer Justin Hoyt. Hoy allowed two hits but no runs and recorded the save.

The Panthers and Gamecocks will be playing tomorrow and Saturday at 3 p.m. both days.