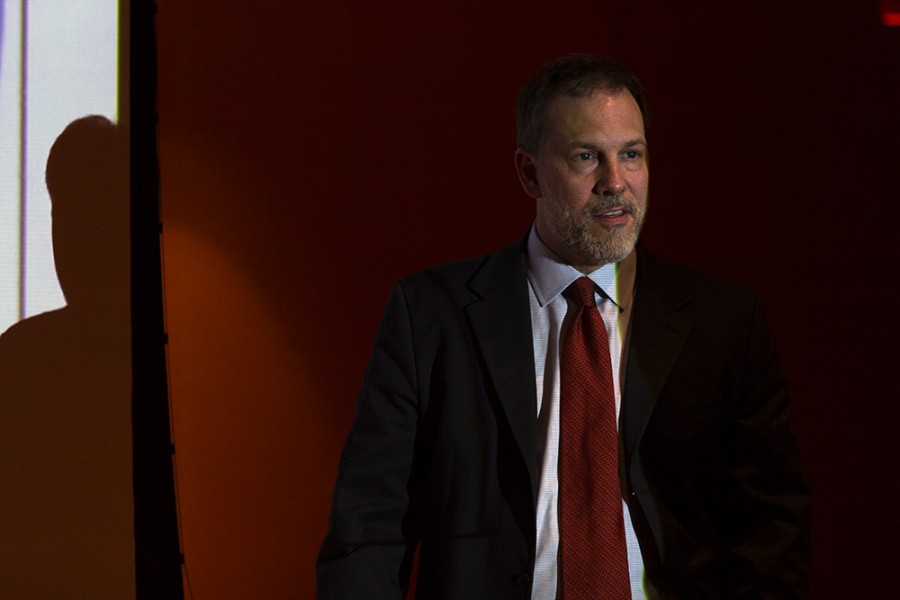 Rising tuition, decreased state funding and financial pressures on public universities are all leading to what University of Illinois professor Christopher Higgins calls a “death spiral” in public higher education.

CC Wharram, the director of the Center for the Humanities, said they try to get people, including Higgins, to speak on timely issues such as the challenges facing higher education while the “folks in Springfield are making things (at Eastern) difficult.”

Higgins said there are large-scale forces leading to the decline of higher education.

This all leads to the next step in the spiral, which is what Higgins said is a vocalization of universities, or the tendency to view higher education as a first and foremost factor in securing the credentials necessary to succeed in the job market.

Higgins said this gets worse when people think the point of going to college is to enter the job market with a certain credential.

“My argument would be not that education has nothing to do with the real world and getting a job, but, of course, preparing people for work includes not only how to do x but why x matters, how to keep learning throughout a career because x will change,” Higgins said.

He said it is important to make sure students know they care about their lives as citizens.

This then makes people see higher education as a private good as opposed to a public good, which decreases taxpayer support for higher education, and takes the cycle back to the beginning, with a decrease in state funding for public universities.

Higgins said because of this, many schools try to convince people they are a good “investment” that can get students jobs because of the high cost of universities. 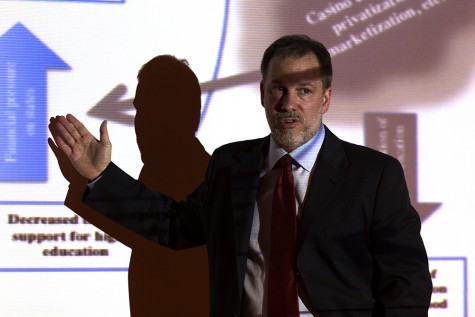 Because many parents are paying a lot of money and students know that Higgins said many people want to be able to “see a paycheck” at their end of their four years at universities, leading to the further vocalizations of schools.

He quoted Harry Truman’s Commission on Higher Education, saying if college opportunities are restricted to those in higher income brackets, that way it’s open to a creation of and perpetuation of a class society which has no place in the American way of life.

He said there are low-cost options in United State higher education, but the worry was that some or all community colleges and technical schools do not seem to produce the credentials that are translatable into the social mobility envisioned by the Commission.

In the midst of the recession, tuition increases in Arizona, Georgia and Washington universities were 70 percent, and even with these dramatic increases, some charge a premium for professional majors, Higgins said.

“The illusion, of course, is these are public universities and, of course, they are country clubs for the privileged,” Higgins said.

This rising tuition has many causes including “administrative bloat.”

Higgins said while faculty-student ratio has remained constant, there has been a market growth in the number of administrative positions and increasing presidential salaries.

He said the main culprit causing the rise in tuition is the waning of state funds.

Higgins said this indicative of a national decline, as per-pupil funding dropped by 30 percent from 2000 to 2010, before the recession started.

This rising tuition puts more strain on families of students who are going to school and causes students to go into more debt to pay for their education.

Higgins said public higher education could be thought of as a private or public good, saying certain parts were private as it was linked to the aspect of society trying to distribute economic employment opportunity.

Higher education could be seen as a public good as some think it is best to educate people for the good of different communities.

“When we educate each other’s children, the concept is, we all benefit,” Higgins said. “Preparing students for public life, this mindset of being something larger than you, being able to deal with people who are different for yourself…I think that’s a public good in a more essential sense.”