Organizations to decorate piñatas with the president 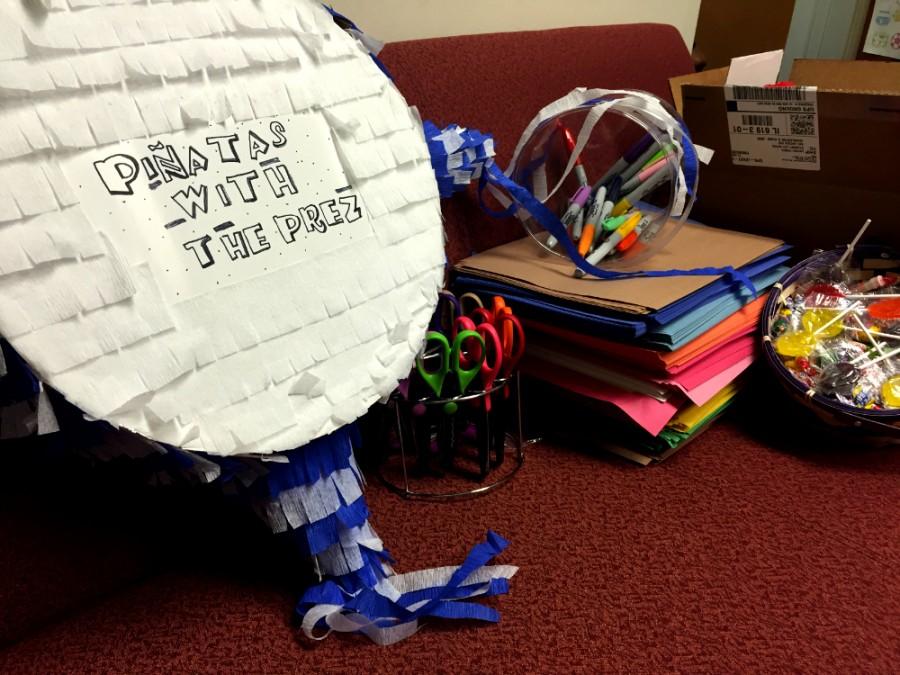 A sample piñata, along with the supplies needed to decorate, will be available at the Piñata with the Prez event on Tuesday in the Grand Ballroom of the Martin Luther King Jr. University Union.

Different organizations across campus will be decorating piñatas at the Piñata with the Prez event Tuesday.

Piñata with the Prez is a different take on the Prowlin’ with the Prez series, because the student government is teaming up with the Latin American Student Association.

Stephen Simpson, the student vice president for academic affairs, said LASO wanted to do an event with the student government for the series.

“(LASO) knows the purpose of the Prowlin’ with the Prez series,” Simpson said. “Between them and their adviser they thought of Piñata with the Prez and notified me, and I thought it was a wonderful idea.”

Simpson said this Prowlin’ event drew in organizations from each of the different parts of campus including Greek life, honors fraternities, social organizations and residence halls.

Simpson said 12 confirmed groups had signed up for the event, but there are 15 tables in case more groups walk in.

He said if more people walk in they can watch piñatas being made or they can join a group who is signed up.

The piñatas are pre-made and circular, and groups will have 45 minutes to decorate the piñata they receive before the judging begins.

Simpson said he encourages people to bring decorations that represent their organization.

“The African Student Association is bringing African cloths, so that’s interesting,” Simpson said. “I would suggest if you were part of a sorority to bring your letters printed on something clear to showcase your organization.”

Simpson said the first and second place winners will receive candy to put in their piñata, and Visa gift cards will also be given out.

Simpson said there would be ribbons given to everyone who participates as a souvenir.

The piñatas will not be broken at the event.

“They can take it back to their organization and maybe that’s a bonding experience for them to break their piñata,” Simpson said.

Refreshments will be available during the event such as water, either fruit punch or pink lemonade and Horchata, which is a beverage made with rice.

“It’s a Latin type of thing,” Simpson said. “We also have mini tacos and chips and salsa.”

Simpson said the creativity and audience of this Prowlin’ event helps make it different from the past events.

“I feel like this one requires more creativity. Each event is made to grab a different group from campus, but this is more of a creative type of thing, whereas the first one was a ‘come here and listen’, the second was for animal lovers, the next one was pastry lovers,” Simpson said. “They each feed off of different interests of our student body.”

The next Prowlin’ with the Prez will be a senior send-off.

Simpson said the idea for the Piñatas with the Prez event back in November and the planning for it began in December.

Groups who are participating in the event are asked to go and register between 3:30 p.m. and 3:45 p.m. Tuesday in the University Ballroom of the Martin Luther King Jr. University Union.

The molds and decoration materials will be available for participants to use, and a sample piñata will be on display for others to view so they can get ideas for their own piñata.