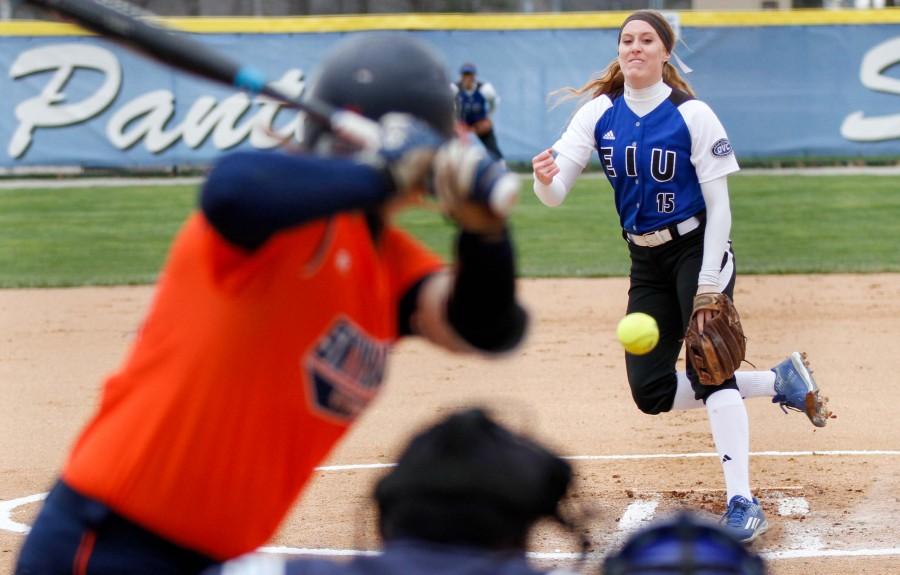 Jessica Wireman, a sophomore pitcher, pitches during the first game on Saturday against the UT Martin at Williams Field. The Panthers defeated UT Martin in all three weekend games to start 3-0 in conference play.

Senior outfielder April Markowski went 3-4 in the second game of the series against Tennessee-Martin with one RBI. But that RBI could not have come at a better time for the Panthers as it gave them a 5-4 walk-off win in the bottom of the seventh.

The Skyhawks scored two runs in the fifth inning to get the game tied at four.

Sophomore pitcher Jessica Wireman got the win on the mound for the Panthers pitching 1.1 innings and giving up no runs. She also struck out three batters.

Eastern opened up Ohio Valley Conference play over the weekend with a three-game series against Tennessee-Martin at Williams Field.

Senior Kylie Bennett had struggled all weekend before the sixth inning of the final game of the series against Tennessee-Martin Sunday. Bennett was 0-8 going into her ninth at bat of the weekend when she hit a double to left center field driving in senior Katie Watson to give the Panthers a 3-2 lead.

Eastern ended up winning the game by a score of 3-2 to complete the three-game sweep of the Tennessee-Martin Skyhawks. The win also improved Eastern’s Ohio Valley Conference record to 3-0.

The Panthers struggled throughout the pre-season against the tough competition, but everything was coming together for them at the start of OVC play.

“It was great, it was great to hit the ball finally,” Nicholson said. “I really think that our preseason has really helped us prepare for the (OVC games).”

The Skyhawks got on the board in the first inning of a single by Katie Warrick, but a two-run homerun by freshman second baseman Jennifer Ames in the bottom of the second inning gave the Panthers a 2-1 lead.

The lead would not last long as Tennessee-Martin tied it up in the top of the third inning. Lauren Myers drove in Carly Gonzales on a double to left center field.

Freshman Kayla Bear was the designated hitter and leadoff hitter for the Panthers and led the way going 2-3 in the game.

Before Watson got on base in the sixth inning, the Panthers had not had a base runner since the third inning. Bennett handled the rest giving the Panthers the OVC win.

Wireman got the win for the Panthers. Wireman pitched all seven innings giving up two runs on eight hits. She struck out eight in the game.

Wireman remains perfect in OVC play with a 3-0 record after earning both wins on Saturday.

Wireman dominated game one of the weekend pitching a complete game shutout. The Panthers won the game 8-0.

She allowed just four hits and struck out eight. She had 19 strikeouts in 15.1 innings pitched this weekend.

“If we keep getting that from her and if we keep building upon our offense, we’re gonna be tough to stop,” Nicholson said.

Senior Jennette Isaac was the difference maker at the plate for the Panthers in the shutout win. Issac drove in three runs in the game, two of them coming in the sixth inning to end the game, run ruling the Skyhawks.

The score was a pitcher’s dual up until the Watson got the scoring started with a single in the third inning. Eastern tacked on two more in the fifth to take a 3-0 lead but a big five-run sixth inning was all Eastern needed to get the win.

Having such a successful weekend after the pre-season struggles, Nicholson said this is the team she knows she has, and more.

“We haven’t seen it yet,” she said. “That’s what’s great. There is so much potential here.”

She added that she hopes these games gives the players a chance to see what they are capable of doing.

Eastern will take on Butler Tuesday afternoon in a non-conference doubleheader on its home field again.