Topcat: Freshman Steps Up To the Plate 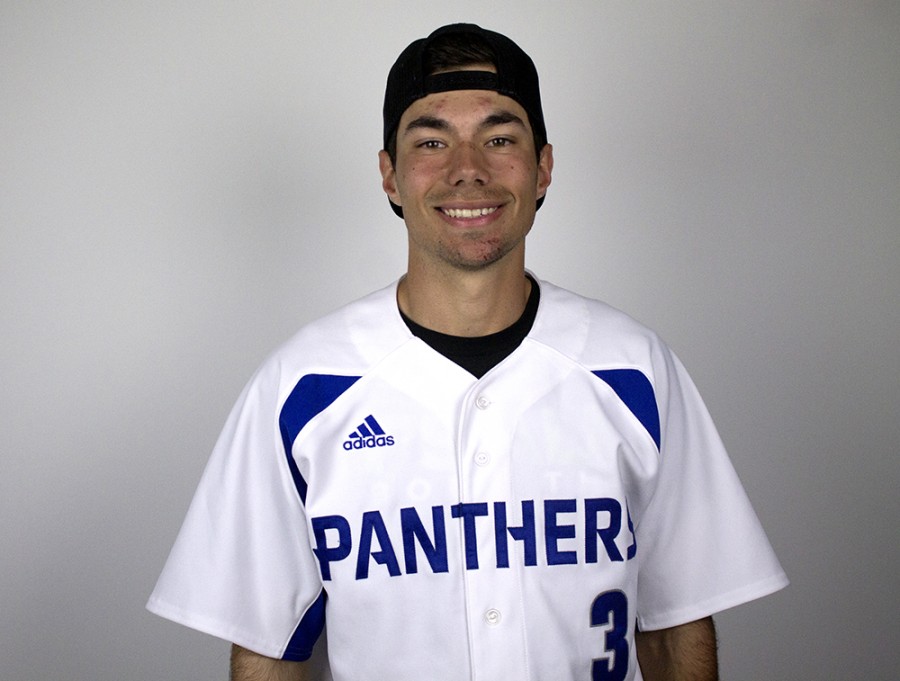 As the lead-off hitter for the Panthers last weekend against No. 12 ranked Arkansas, freshman infielder/outfielder Dane Toppel helped his team rack up its first win of the season when he hit a lead-off double to get momentum going for the Panthers.

“The win was definitely the highlight,” Toppel said. “That game was really fun because it was back and forth. They threw some punches, we took some, we threw some back. Our team’s ability to bounce back and come back with a win was really cool.”

Toppel’s favorite hit of the game was in the most intense part of it, when the pressure was high, showing that he was able to step up in the crucial parts of the game.

“My favorite hit was when the bases were loaded, and I hit a double.” Toppel said, “I talked to coach before that and he told me to just sit back and hit a fastball when it came to me and, sure enough, that’s what the pitcher threw me.”

Toppel went on to score twice, with two hits and two RBIs in Eastern’s first win of the season.

Coach Jason Anderson is excited about the fitness level Toppel is at during this point in the season, Anderson said.

“He’s been tremendous,” Anderson said. “He struggled early in the spring, so we took a step back as far as playing time and it paid off. He came back in a big way. He’s very open and honest when it comes to baseball. He will let you know what he is struggling with and work with you to fix any issues to become the best player possible.”

Becoming the force he is for the Panthers’ offense came with hard work in the off-season, where Toppel said he turns his struggles into strengths.

“If I feel like I’m struggling more in one area, hitting or fielding, then I’ll work on that but for the most part, it’s just what I feel I am struggling on,” Toppel said. “Some days in the off-season I’ll work on hitting and some days I’ll work on fielding.”

While working on weaknesses in the off-season, Toppel said he mostly focuses on fielding and footwork with the team during practice.

“I need to work on my footwork, so that’s a big thing I like to work on at practice,” Toppel said. “For infielders, we work on how to approach the ground balls, and different speeds and also fluidity.”

With conference matchups just around the corner, Toppel’s goals haven’t changed since the beginning of the year. Eastern has had their eyes on an Ohio Valley Conference tournament berth, and has been working towards that goal, he said.

Although his goal is to help his team make it to the conference tournament, Toppel has his eyes set on winning another game this season against a nearby rival.

“The Illinois State game is one I have circled on my calendar. I’m looking forward to it just because it’s an in-state game and I feel like if we win that we could have some bragging rights in the state of Illinois,” Toppel said.

Toppel chose to play baseball at Eastern Illinois University because of the “homey feel” he felt when he visited campus.

“When I came here for my visit,” Toppel added, “I knew this would be a great place to spend the next four years of my career. I was looking at a few other schools further up north and they were a little too cold for me.”

Toppel knew it would be hard to adjust to collegiate baseball, but he didn’t realize just how easy he would make it look to everyone else watching.

Toppel has recorded a .480 slugging percentage over nine games so far this season. He has also recorded 25 total at-bats, with ten runs and two RBIs for a .360 batting average.

“Anytime you jump into something your first year, you don’t really know what to expect,” Toppel said. “Being a freshman I saw what the older guys went through last year, and I really like it here so far.”

Being a consistent batter for Eastern will only help the Panthers get wins this season.

The Panthers took a 2-0 loss Wednesday afternoon to St. Louis.

The Panthers will head to Austin Peay in Clarksville, Tenn. on Friday to take on the Governors in their first conference matchup in a three-day series over the weekend.